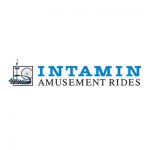 Intamin is a major player in the theme park industry and its name is derived from the term “International Amusement Installations”. Intamin offer over 20 ride variations, from roller coasters to water rapids and drop towers to dark rides. They also specialise in giant Ferris Wheels, including the Orlando Eye in Florida, USA.

Intamin are renowned for their innovative and record breaking installations. They were the first thrill ride manufacturers to introduce the magnetic propulsion system launch, the hydraulic launch, and magnetic brakes. Intamin has also held many world records for tallest and fastest roller coasters in the world.

Intamin’s first roller coaster was Jr Gemini at Cedar Point, USA. It’s an oval-shaped kiddie coaster with a small dip. It has a top speed of 6 mph (10 km/h).

Intamin’s Accelerator Coaster (sometimes called a “Rocket Coaster”) is one of the most innovative designs ever seen. Using a hydraulic winch cable launch system, these coasters can smoothly reach a high speed of 149 mph (240 km/h) in a matter of seconds. This coaster type was very popular in the mid-2000’s, creating many new world records for the fastest (and tallest) roller coasters. The first Accelerator coaster – Xcelerator at Knott’s Berry Farm – opened in 2002. Although new installations have been sparse in recent years, very few other coasters offer riders such a thrilling experience.

Consistently ranked among the best by enthusiasts, Intamin Blitz coasters feature multiple LSM launches and custom layouts. Maverick at Cedar Point in Ohio, USA, was the first to open in 2007 and features a launch lift hill in addition to another launch in a tunnel under the loading station.

Intamin created a variation of their Blitz coaster with Fahrenheit, which opened in 2008 at Hersheypark in Pennsylvania, USA. Both feature twisting and turning track with plenty of inversions taken at high speed, but Fahrenheit substituted a vertical chain lift hill in place of the launch.

The first Bobsled Coaster to use steel was developed by Intamin in 1984. “Screamin’ Delta Demon” operated at Opryland USA, until 1997. Like the wooden versions, Intamin also use single cars to traverse through the trough. However, the company no longer manufactures Bobsled Coasters.

Intamin’s Family Drop Coaster was the first of its kind in the world. As it’s a family coaster, there is a winding, non-inverting section before the train comes to a stop inside a building. At this point it goes through a free-fall drop similar to a drop tower. Rival manufacturers Zierer also produce a similar ride. The first Family Drop Coaster opened in March 2010.

Intamin are renowned for creating record breaking roller coasters using Hydraulic Launch technology, but the company also offers a tire propelled launch coaster which is more suitable for younger riders because the acceleration is less intense. Intamin Family Launch Coasters use both the horizontal and vertical tire positions.

Following the success of their Impulse Coasters, Intamin created the smaller footprint Half Pipe coasters starting in 2003. Again a launch propels the car forward and backward up the compact U-shaped track. The cars are designed like skate boards with two sets of six rotating seats that spin freely.

An Intamin Impulse coaster is recognised by two tall vertical spikes in a half-pipe style layout. Suspended trains are launched from the station and fly forwards up one of the spikes. The train falls backwards where a short launch burst propels it up the other spike. The train repeats this action several times as it climbs higher up the spikes. The spikes are either twisted or straight. The first Impulse Coaster was Linear Gale at Tokyo Dome City in Japan, which opened in 1998. The first twisted version, Steel Venom at Geauga Lake in Ohio, USA, opened in 2000. Steel Venom was relocated to Dorney Park in Pennsylvania, USA, in 2008 after Geauga Lake closed.

Manufactured in 1997, Intamin’s troubled Launched Freefall Coasters include the twin tracks of Superman: The Escape at Six Flags Magic Mountain in California, USA, and the single-tracked Tower of Terror at Dreamworld in Australia. Despite each having a designed speed of 100 mph, Superman: The Escape was built taller.

In 2010 the one in Australia was converted to a Reverse Freefall Coaster by changing the position of the trains so riders face backwards and they now look toward the ground rather than the sky on the vertical track. The same thing happened with the one in California the following year and it was renamed to Superman: Escape from Krypton.

Unlike the company’s Multi-Inversion coasters, the single loop California Screamin’ at Disney California Adventure Park features a Linear Induction Motor (LIM) launch. It also includes a chain lift hill in the middle of the circuit and is the world’s longest coaster with an inversion.

The Intamin Mega and Giga Coasters are similar in layout but differ in height and speed; a Giga Coaster is taller and faster than a Mega. The layouts are characterised by steep hills and drops, high speed horizontal turns close to ground level, over-banked curves, a twisting winding ’up and down’ section, air-borne S-curves and hilly camelback hills. Speed and airtime are the two similar factors. The lift hills also use a cable instead of a chain; a world’s first by Intamin. Mega Coasters are usually over 200 feet (61m) and Giga Coasters over 300 feet (91m) tall.

As the name suggests, A Mega-Lite coaster is a smaller version of Intamin’s large “Mega Coasters” (see above). The layout is characterised by steep hills and drops, high speed horizontal turns or close to ground level, over-banked curves, a twisting winding ‘up & down’ middle section, air-borne S-curves and hilly camelbacks/bunny hills towards the end of the ride. This “budget” version of the Mega Coaster is more suited to family parks looking for a coaster with a bit of a bite to it. The first Mega-Lite opened at Tobu Zoo Park, Japan, in 2008.

The Multi-Inversion Coaster began with eight inversions, making it the record holder for the most inversions on a coaster. Intamin superseded this model in 2002 with the 10-time inverting Colossus at Thorpe Park, UK. Intamin now offer a coaster with 12 inversions. All three models (8, 10 & 12 inversions), roughly follow the same layout and contains inversions in a methodical, well spaced manner so riders don’t feel uncomfortable.

More commonly known as “Plug‘n’Play”, these “prefab” coasters are the most widely known wooden coasters Intamin manufacturers, even though the company produced traditional woodies as well.

Like a toy model you put together at home, a Plug‘n’Play coaster essentially arrives “flat pack”, with a set of “insert A into C and tighten with bolt 9F” instructions. The engineers at the park simply put it together on a flat area of ground.

Although this process sounds rather whimsical, Plug‘n’Play coasters are highly engineered and designed to give maximum thrill and airtime.

Intamin Spinning Coasters have a face-to-face seat arrangement and the cars are slightly tilted towards the outer edge of the track. There is only one Intamin Spinning Coaster currently in operation – Tornado at Bakken in Denmark. The custom design opened in 2000 and has a compact layout which offers a tight, twisting experience.

Intamin quickly followed Togo by creating their own version of the standup coaster in 1986. Featuring wider four-across trains and larger, faster layouts and inversions, Intamin quickly made a name for themselves with their outstanding products. This rapidly came to an end when their lead designers on the standing coasters, Walter Bolliger and Claude Mabillard, left to form their own company.

In 1998, a year after the company’s Launched Freefall coasters debuted, Intamin introduced their inverted launch coaster with Volcano: The Blast Coaster at Kings Dominion in Virginia, USA. Using a second launch to boost the train out of the top of the man-made volcano, this model paved the way for future Impulse designs (see below) to be what they are today. Unfortunately, Volcano closed in 2019 and will likely be the company’s only launched suspended coaster ever built.

Intamin also tried their hand at a version of the popular Bolliger & Mabillard (B&M) Inverted roller coaster. Even though their pair of inverted coasters were much smoother than Vekoma’s, and were indeed raved of as excellent coasters, B&M’s perpetual domination of the Inverted coaster market means that Intamin’s unique design is often overlooked.

Intamin designed their water coaster around the record breaking Pilgrims Plunge at Holiday World in Indiana, USA. The 135 feet (41m) tall shoot the chute attraction was the world’s tallest water ride when it opened in 2009, but was plagued with reliability issues and was removed in 2013.
The year before Pilgrims Plunge (renamed Giraffica) closed Intamin opened Divertical at Mirabilandia in Italy, which uses the same tilting elevator lift system but replaced the shoot the chutes trough with roller coaster track. They also made it 62 feet (19m) taller and added a splash track, two airtime hills and a 360° helix, with the splash down at the end of the ride.
In spite of the continuing reliability issues, Intamin has built several additional variations of Divertical that includes a shorter 141-148 foot (43-45m) lift hill drop and a 540° helix.

The only other type of “water coaster” Intamin produced is the Aqua Trax model, which is an LSM launch coaster with a variety of water interactions and effects. Only one has been built thus far – Atlantis Adventure at Lotte World in South Korea.

In 2007, Furius Baco at PortAventura, Spain, opened as Intamin’s first Wing Coaster model. Riders sat on “winged” seats either side of the track. Due to the train design, the ride is an uncomfortable experience in the outer seats. Although the coaster has a reputation of being rather rough, it remains one of the most popular rides in the park. However, no other parks purchased the model and the company was forced to re-think the design.

In 2012, Intamin changed its winged-seating concept by putting the two center seats above the track and positioning its outer seats a little lower on either side. In this formation the riders on the outer edges have a more intense experience than those seated in the middle. Intamin’s Wing Coaster uses lap bar restraints instead of over-the-shoulder restraints like on other versions by other manufacturers.

A ZacSpin coaster has a very small layout and a vertical lift hill; a perfect coaster for a park that is running out of space. Up to eight riders sit on trains where four sit on one side of the track, four the other. Riders are seated back-to-back on each side. The train heads up the vertical lift hill where it then completes a snake like layout under each horizontal hairpin section of track. As the train moves along the track, it spins naturally using its weight and motion. This action is a known as a “4th Dimension” coaster. ZacSpin Coasters are occasionally refereed to as “Ball Coasters”. The first ZacSpin, Kirnu at Linnanmäki in Finland, opened in 2007.

Intamin steel track is recognizable by its ‘triangular’ or ‘box’ shaped track. If you look carefully, you’ll see that the track either contains two, three or four rails; each one is used depending on the stress on the track caused by the train. Less strain, two rails. More strain, 3 rails. Most strain, 4 rails.