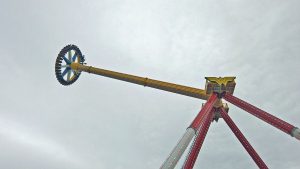 This is the fourth one of these popular attractions to open at Six Flags parks and the second to open this year. The Riddler Revenge was the first, opening at Six Flags Over Texas in 2016 and Pandemonium opened at Six Flags Over Georgia in May, 2019. However, both of those models are smaller at 90 feet (27.5m) tall and a maximum speed of 69 mph (111 km/h) for the one near Dallas, while the one in Atlanta is 150 feet (46m) tall and reaches speeds up to 70 mph (112.5 km/h).

See what our members are saying about this thrilling ride addition in our Forum discussion.