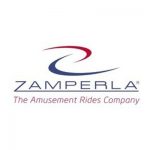 Zamperla was founded in Italy in 1966 by Antonio Zamperla. The company concentrated on producing adult rides for children by manufacturing smaller model bumper cars and go-karts. In 1972, Zamperla opened a sales office in Montreal, Canada, and a few years later when most of their business was coming in from the USA, Zamperla set up shop in New Jersey.
Zamperla specialise in the production of transportable amusement rides, however these models can be fully adapted for permanent homes in theme parks. Zamperla have installed over 100 permanent thrill rides and more than 250 family friendly roller coasters. Luna Park at Coney Island in New York, USA, is often seen as the companies “showcase” park with its many operating rides manufactured by Zamperla.
In addition to the ride types listed here, Zamperla also produce family friendly log flumes, rapids rides and interactive water rides (similar to a Splash Battle).

In 1984 Zamperla built their first coasters at Midway Park in New York and Kings Castle Land in Massachusetts, USA. Both were Dragon powered kiddie coasters (like the one pictured to the right) that feature two connected helixes. The one in New York closed in 2012, however Kings Castle Land shut its doors 1993 and there are no records of what happened to the coaster after that.

Named after the famous coaster that used to reside at the same Coney Island lot where this one debuted, Zamperla’s newest model is also their largest. However, it in no way resembles its wooden predecessor, other than fitting into an extremely narrow area.
The steel looping coaster features a 115 foot (35m) tall vertical lift hill with a 90° drop that propels the cars at speeds up to 60 mph (90 km/h) as it transverses through a 98 foot (29m) vertical loop, a 82 foot (25m) tall zero-g roll, a 112° over-banked turn, a unique heart line dive, a corkscrew and several airtime hills.

Designed and engineered by world-renowned coaster guru, Werner Stengel, the Volare is a Flying Coaster combined with a Wild Mouse style layout full of constant turns and small dips. Riders are suspended four across in one of seven individual cars, offering every rider an unobstructed front seat ride. Featuring a unique spiral lift system, riders will experience swooping turns, drops, and inversions. The Volare model has a spiral lift hill to reduce the rides footprint – ideal for smaller parks.

A dozen riders sit two abreast on their own motorbike or horse themed train before launching from 0-40 mph (65 km/h) in less than two seconds! The launch is achieved by means of a flywheel and clutch launch system proven in the industry for over 30 years. The trains navigate an ascending banked turn to a height of over 40 feet (13m) before racing to the finish line through a series of exciting 60° banked turns and figure-of-eight manoeuvres. The first MotoCoaster opened at Darien Lake in 2008. This is similar to the Motorbike coaster made by Vekoma.

Zamperla was a big part of the Wild Mouse coaster revival when Doo Wopper at Morey’s Piers in Wildwood opened on the Jersey Shore in 1998. Called Zig Zag Coasters, only eight have been manufactured so far, mostly due to the popularity of the company’s Twister spinning Wild Mouse coasters, which began production in 2005 with Crazy Mouse at Martin’s Fantasy Island in New York, USA.

The Twister Coaster is similar to other spinning wild mouse coasters produced by various companies. Unlike other manufacturers’ models, Twister Coasters use individual lap bar restraints for the riders. Like the Reverchon Wild Mouse models, up to four riders sit in a single row across the car. The Twister Coaster comes in several set sizes or can be customized to a theme park’s specification.

The Zamperla Air Force coaster is a suspended family coaster themed to airplanes. The track layout typically has 180° hairpin turns although it rarely elevates like a standard coaster. The suspended cars swing side-to-side as they travel along the track. Up to four children or two adults can fit in each car. To date (Jan 2013) there are three Air Force coasters in the world; two in Europe, one in India.

This traditional steel coaster was designed as a traveling model similar to the S.D.C. Hurricane coasters. Only one ever had a permanent installation – Windstorm at Old Town in Florida, USA. It operated from 1997 to 2014 before being relocated to Adventure Park USA in Maryland and was renamed to Wild West Express.

The Zamperla Family Coaster 80STD is a traditional steel family coaster without inversions. With over 30 operating at parks the word over, there’s a very good chance you’ve ridden or at least seen one.

As the name suggests, the Zamperla Powered Coaster is a traditional steel kiddie coaster without inversions or a lift hill, as the train is powered by electrical current to circumvent an oval track. There are two variations with a single or double helix, as well as custom models such as Buffalo Coasters and the Dragon coasters mentioned at the top of the page.

In addition to the coaster types listed above, Zamperla also produce Air Race, Hawk, Disk’O, Discovery Revolution, Power Surge, Turbo Force booster, vertical swing and drop tower thrill rides as well as family friendly Windstarz, Tea Cups, Ferris Wheels, carousels, log flumes, river rapids, interactive water rides (similar to a Splash Battle) and dozens of kiddie rides. For a comprehensive list, check their website (link below).
In 2005 Antonio Zamperla was the first Italian to be entered in the IAAPA Hall of Fame, the roll of honour of the great personalities of the theme park entertainment industry.