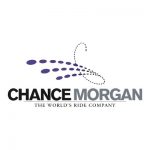 Chance Manufacturing was incorporated in 1961 and six years later began producing Starliner Trams. Chance Rides built their first Ferris Wheel in 1967 and the company’s first coaster was the Toboggan, a portable ride popular in the 1960s and 1970s. In 1970, Chance acquired the assets of the Allan Herschell Company, a Wild Mouse and kiddie coaster manufacturer. However, the company found more success building carousels, starting in 1971, and their Ferris wheels and stopped production of their coasters for nearly two decades.

In 2001 Chance Rides acquired the assets of D.H. Morgan and a decade later Chance Morgan reintroduced the Chance Rides brand name in celebration of the 50th anniversary of its founding.

D.H. Morgan was founded in 1983 by Dana Morgan, the son of Ed Morgan, a co-founder at Arrow Dynamics.

The company was originally created to produce carousel rides, but their first order was for new trains for the wooden coaster Giant Dipper at Santa Cruz Beach Boardwalk. This coaster train business took off and D.H. Morgan soon filled their order books with train manufacturing business. Eventually this side of the business was sold to PTC (Philadelphia Toboggan Coasters).

As well as the successful train production business in the 1980’s, D.H. Morgan also produced a fair number of carousel rides and antique cars rides.

In 1995 Gilroy Gardens asked D.H. Morgan to produce a “mine train” ride for them. Arrow Dynamics had a wide range of these rides already and D.H. Morgan manufactured Quicksilver Express for Gilroy, which looks very similar to the Arrow Dynamic design. However the coaster sat for five years before it was installed.

In the mean time D.H. Morgan had been requested to design and manufacture Hyper Coasters for Cedar Fair among others. Of the half dozen manufactured, Chance Morgan only officially produced one Hyper Coaster (Superman el Último Escape at Six Flags Mexico), the others were all under the D.H. Morgan banner.

When it opened, Wild Thing was the third tallest coaster in the world following the two Arrow Dynamic Hyper Coasters – Big One at Blackpool Pleasure Beach in the UK and Desperado at Buffalo Bill’s Resort & Casino in Nevada, USA.

They may look like Arrow Hyper Coasters, but Chance Morgan are now the only people to produce this style of Hyper Coaster. They tend to be very traditional out and back designs, between 150 (46m) and 300 feet (91.5m) tall.

Even the trains look similar to their Arrow counterparts, however Morgan trains tend to offer a better ride as they do not suffer from the accordion effect that the Arrows do at the top of airtime hills.

The company showed their versatility with Phantom’s Revenge at Kennywood in Pennsylvania, USA. The park wanted their Arrow “looping hyper coaster” to be redesigned, with the inversions removed. D.H. Morgan redesigned the ride and ever since the coaster has been very well received.

Like their Intamin and Mack Rides counterparts, the Chance Rides Hyper-lite is essentially a miniature version of the Hyper Coaster.

The Chance Morgan Family coaster is a steel ride for small spaces and lower thrills, the most well known example being Santa Monica West Coaster at Pacific Park in California, USA, which is small enough to fit onto a pier. It is the most photographed and filmed coaster in the world and has appeared in over 500 movies and television shows, as well as dozens of commercials.

For many years, Chance Rides produced the “Toboggan” coaster. A lighthouse shaped lift hill (inside of which the tiny cars go up vertically) with track that spirals down around the central column. Chance rides no longer make these coasters and there are very few in permanent locations. If you’re unlucky though, your local traveling fair may have one.

The only other coasters Chance Rides have built are Freedom Flyer at Fun Spot America, Steel Lasso at Frontier City, as well as Eagles Life in the Fast Lane and Shake Rattle & Rollercoaster at Hard Rock Park, which are all licensed Vekoma rides. In 2012 Chance Rides and Vekoma discontinued their agreement to produce rides together for the North American market and all future coasters will be produced under the Chance Rides name.