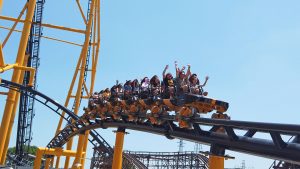 July 13, 2019 – Towering over the park, Steel Curtain opened at Kennywood with the queue line stretching as far as the eye could see. This one-of-a-kind S&S inverting coaster is not only the largest the manufacturer ever built, it’s also the tallest coaster in Pennsylvania at 220 feet (67m), its 9 inversions are the most of any coaster in North America, and it holds the world record for highest inversion at 197 feet (60m).

Built on the site of the former Log Jammer water flume ride, the coaster is part of a new themed area called Steelers Country. As the names suggest, everything in the new section of the park is themed around the local Pittsburgh Steelers football team. The coaster’s color scheme matches that of the legendary NFL franchise and many current and former team members were on hand to be among the first ride.

The long list of inversions include a Drachen Fire Dive Drop (aka Fake-out Inverting Drop), a Banana Roll, a Sea Serpent, a Top Gun Stall, a Dive Loop, a Corkscrew and a Cutback. Steelers Country will also feature the End Zone Cafe as well as the Steelers Experience, a one-of-a-kind indoor, multi-level facility that includes Terrible Tower, a climbing attraction.

See what our members are saying about this thrilling coaster in our Forum discussion.