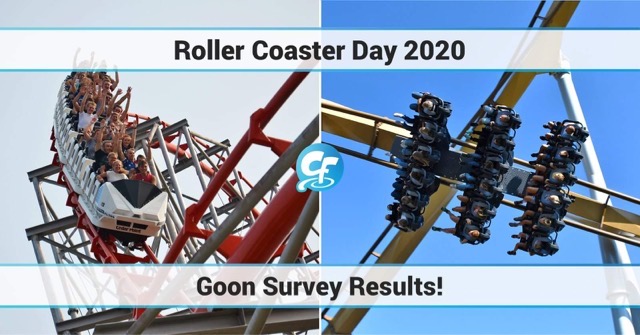 August 16th, 2020 – Happy Roller Coaster Day! We recently asked our followers to complete a survey about what they like about roller coasters and how they enhance their hobby. Thank you to the 230 or so people who responded to the survey – it really helped to collect an interesting set of results! We’ve digested the results and put our thoughts below each chart. You may interpret the results differently from us and, if you do, we’d love to hear your thoughts. If you can’t ride a roller coaster today, we hope these stats will entertain you…and if that fails, there’s more Roller Coaster Day content on our social media!

The best coasters are made from what material? 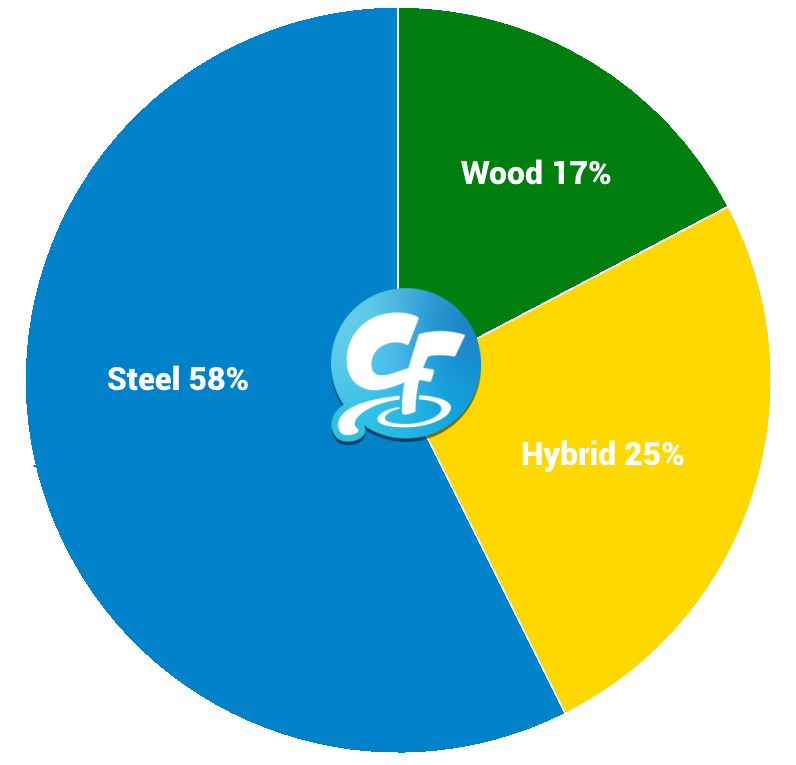 Sorry, coaster traditionalists, but it looks like the love affair with wooden roller coasters could be over. We thought the three options would be more or less evenly split, with steel edging out in front. It could be assumed the arrival of hybrid coasters, and their versatility with inversions and design, is making traditional wooden coasters less popular. By a great margin, enthusiasts think that the best coasters are made from steel.

What is the basic coaster measurement you like the most? 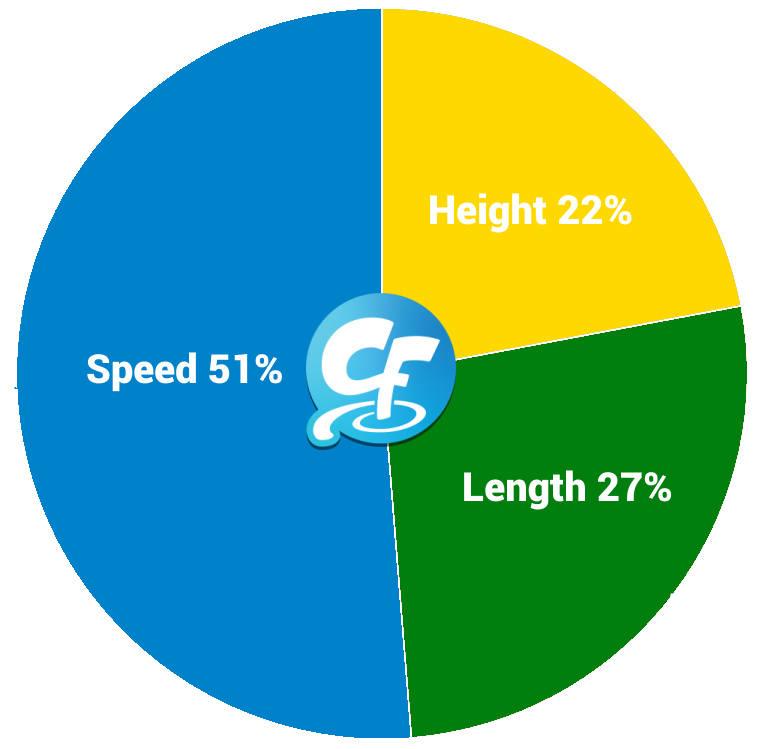 Scream if you want to go faster! Bigger is not always better! Speed is by far the most important basic element for coaster riders. All three elements are essential for a good ride, but going fast is what makes most of us tick. Could it be the feeling of being out of control that people like the most? Which brings us on to our next result…

What’s the best thing about a roller coaster? 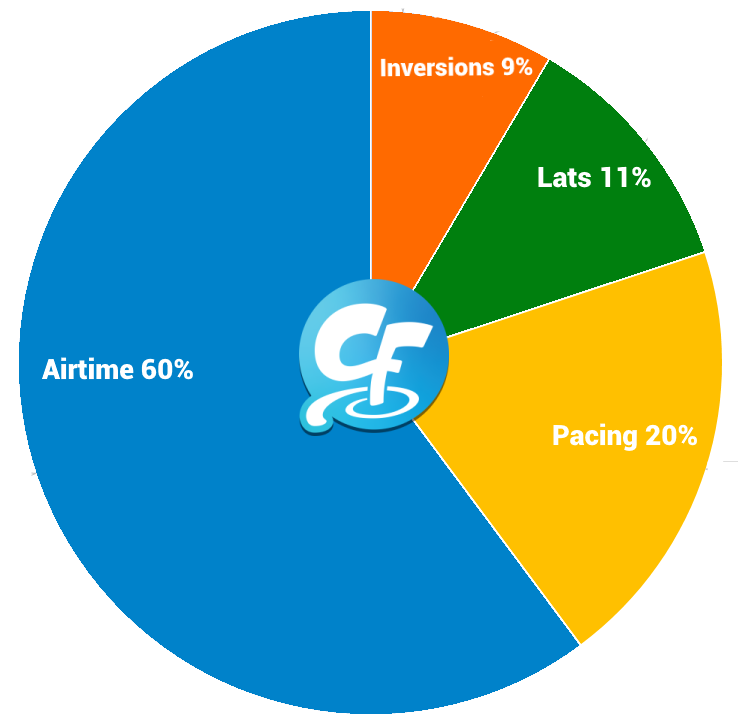 Airtime smashes it! Only around one in 10 people think that going upside down is important. We thought that figure might’ve been higher as inversions usually create memorable coaster moments, but being thrown up from the seat gives most riders the best feeling. It’s those floaty and ejector moments that keep us coming back for more.

Does it matter if a coaster is record breaking? 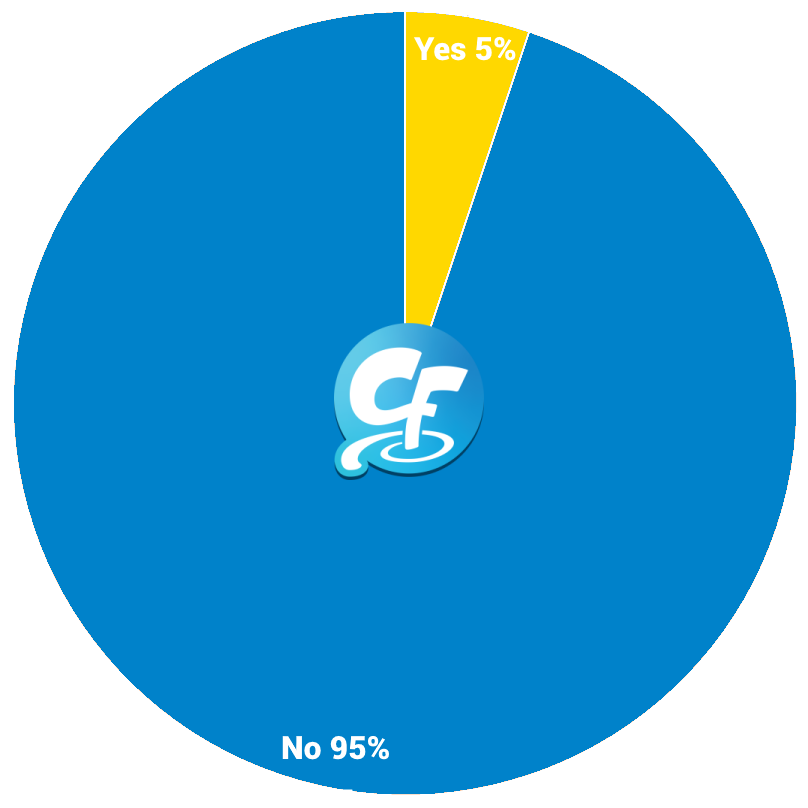 Very decisive result! Although a record or two may help the park sell a ride and get easy press coverage, the overwhelming majority of riders do not care if a coaster is a record breaker. Sure, it’s always nice to say you’ve been on the tallest/fastest/longest/oldest/whatever cred, but ultimately it doesn’t matter. A ride needs to be solidly good, not gimmicky!

How important is it for a coaster to be themed? 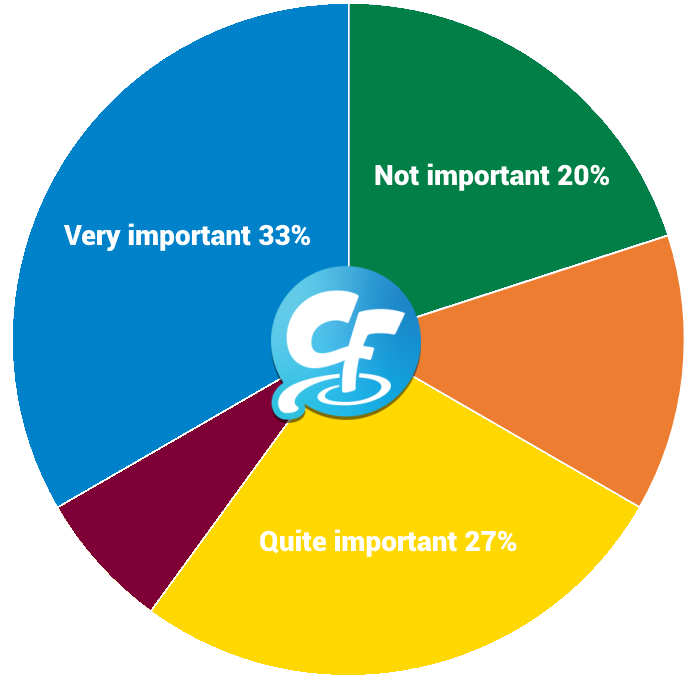 On the whole, goons like their roller coasters to have a theme. Nearly two thirds of riders consider a theme to be “quite to very” important. Most of us go to theme parks for the overused “e” word (escapism, and there’s a question for next year!), so being immersed in a different world created by sights, sounds and smells, is part of it for most park goers. Although 1 in 5 people don’t mind if a ride has a theme or not; they just want to ride!

Which continent has the best coasters? 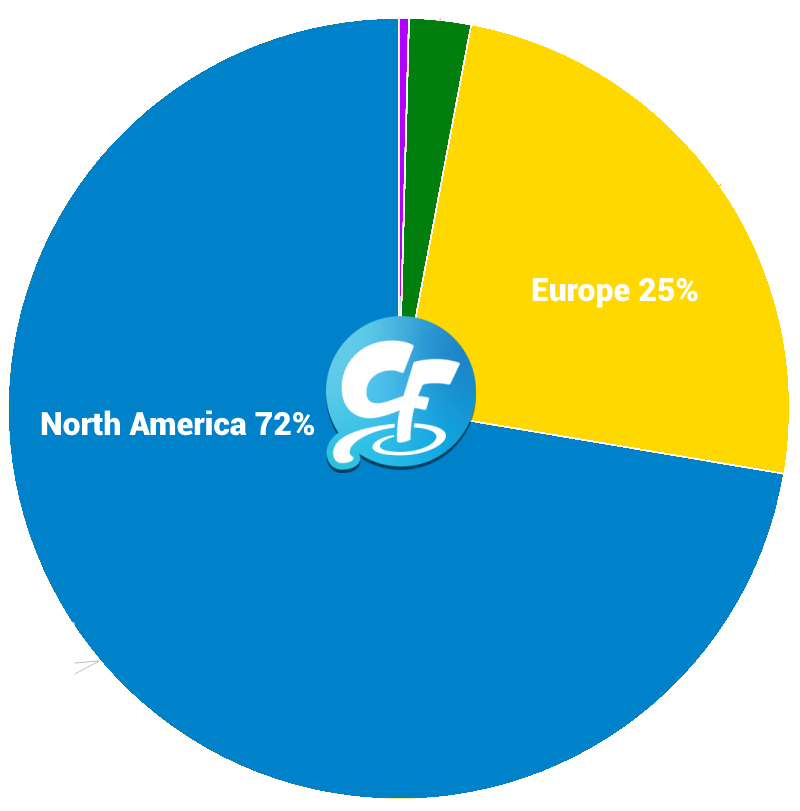 The green segment is Asia, purple is South America. Absolutely no surprise whatsoever. North America – the USA in particular – has for many decades been considered to be the place to go for the most exciting creds. With parks like Universal, Disney, Cedar Point, Canada’s Wonderland and Six Flags, North America was always going to come out on top. And guess where most people’s “bucket list” coasters are… 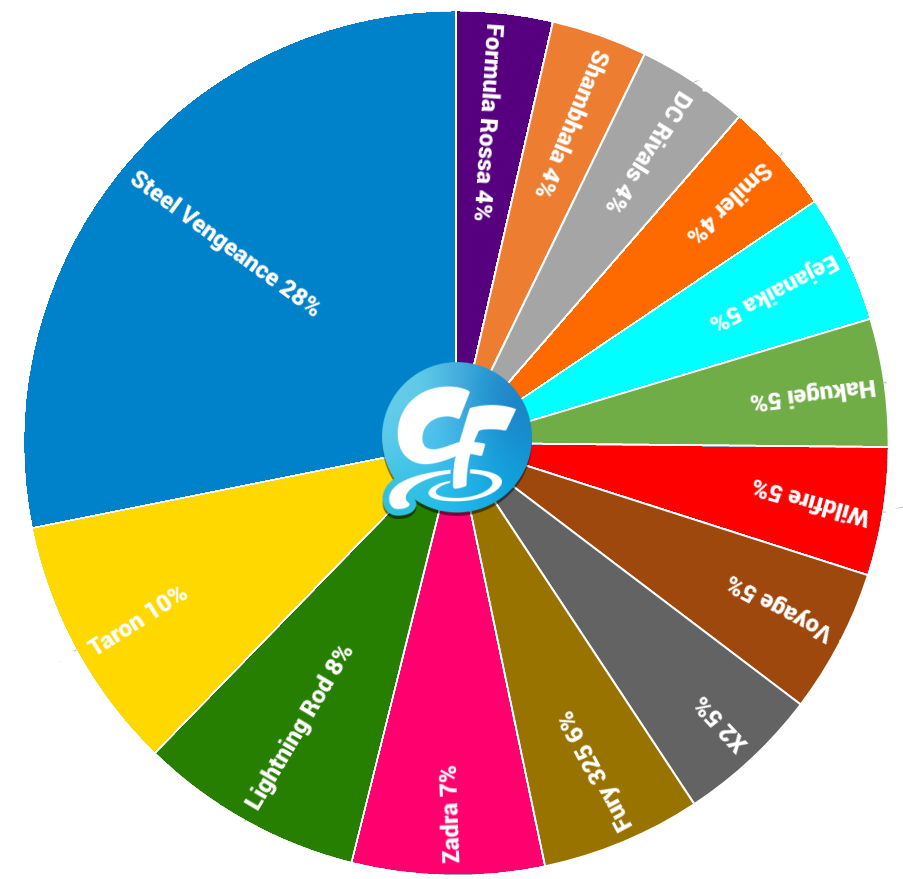 We had loads of different answers for this one so, to make the chart more readable, we only included coasters with more than 5 votes. The results above said  North America is the continent with the best creds and it seems it’s where most bucket list coasters are located. We’re surprised that 28% of people still haven’t ridden Steel Vengeance! RMC coasters are fan favorites, polling 41% of the votes (Wildfire is the cred at Kolmarden). 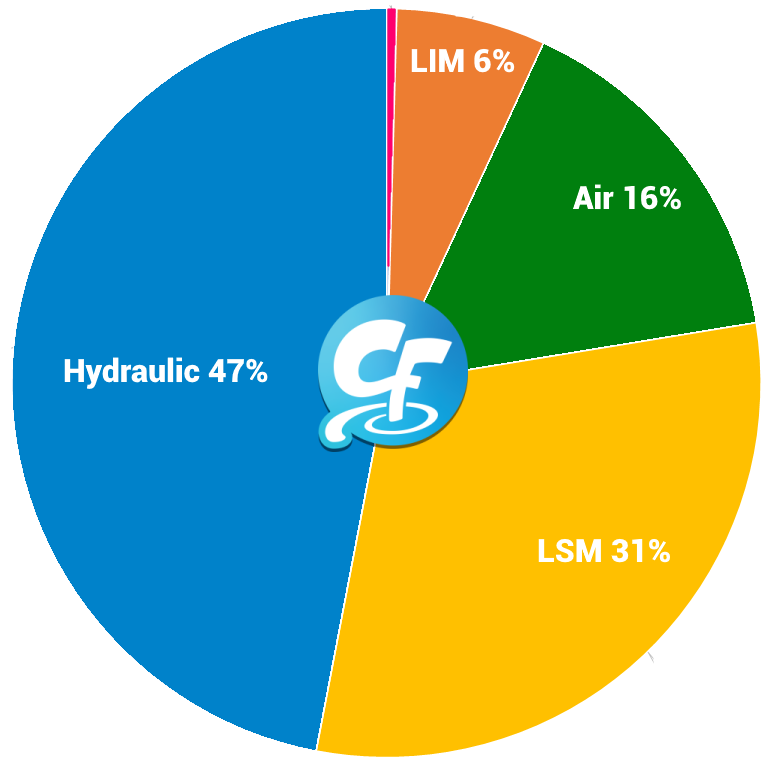 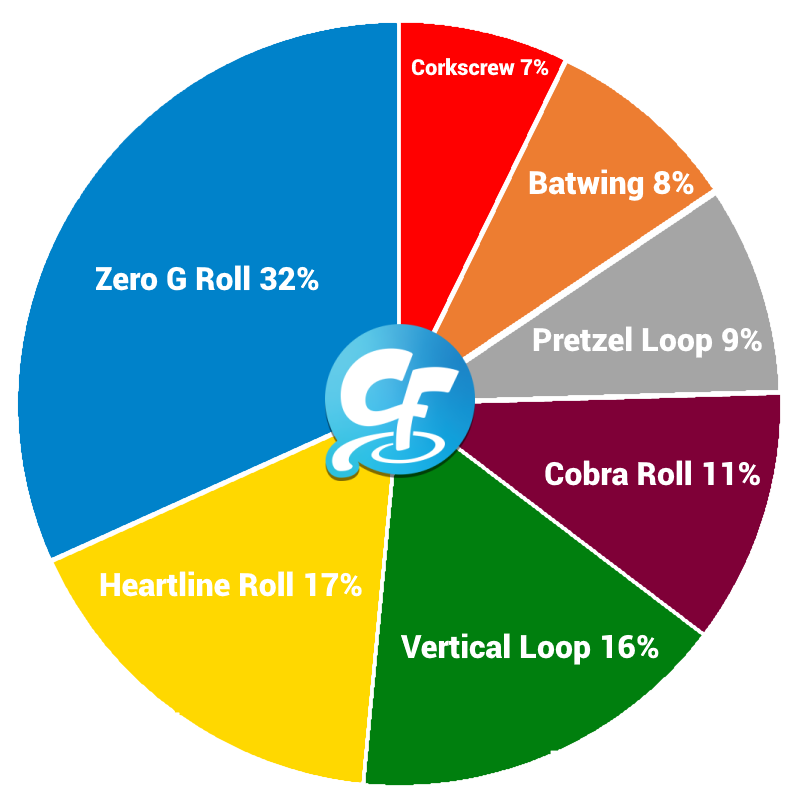 Even though just 9% of respondents considered inversion to be the best coaster element, we still love to go upside down. The Zero G floatiness is the clear winner, proving once again throughout these results that the physic characteristics of a coaster is more important than anything else. A good showing for some of the more intense Batwing and Pretzel loop inversions, too. The traditional inversions, such as the vertical loop and corkscrew, also get a thumbs up. Some entries were elements rather than inversions so they have been removed, and we’ve only included inversions with more than five votes. Shout out to those who nominated “That THING on Untamed”! 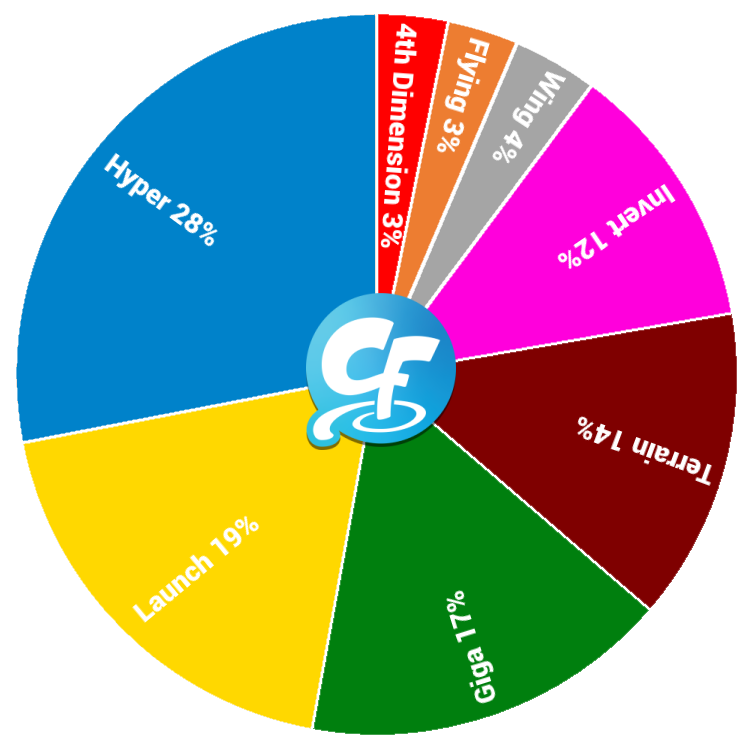 Hyper – those amazing airtime machines – wins over Giga, confirming the “basic measurement” result above, that bigger is not always better in enthusiast eyes. Terrain coasters is one type we didn’t expect to see so high! Again, we filtered out those with fewer than five votes to make the chart clearer, and we also consolidated ride types such as the different type of launch coasters.

Where is the best place to sit on a coaster? 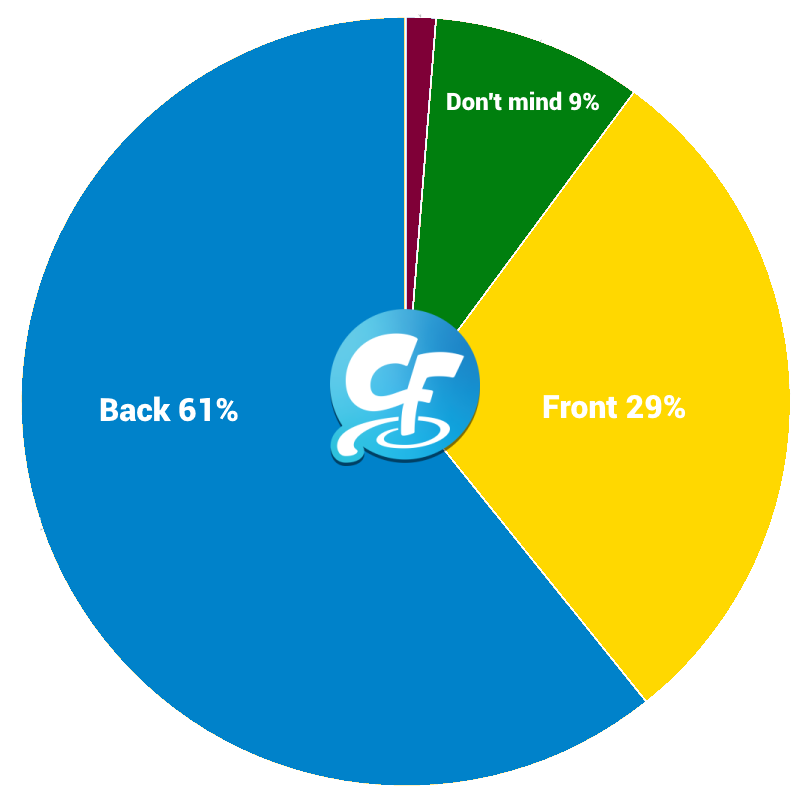 If you want airtime – which most people do, see above – then the back seats is where you’ll most likely find it. Interestingly, people who voted for “wooden coasters” as the best material type overwhelmingly voted for back seats. The purple slither is “middle seats”. We do like that nearly one in ten people don’t care where they sit-  they must just want the cred!

How many different theme parks do you visit every season? 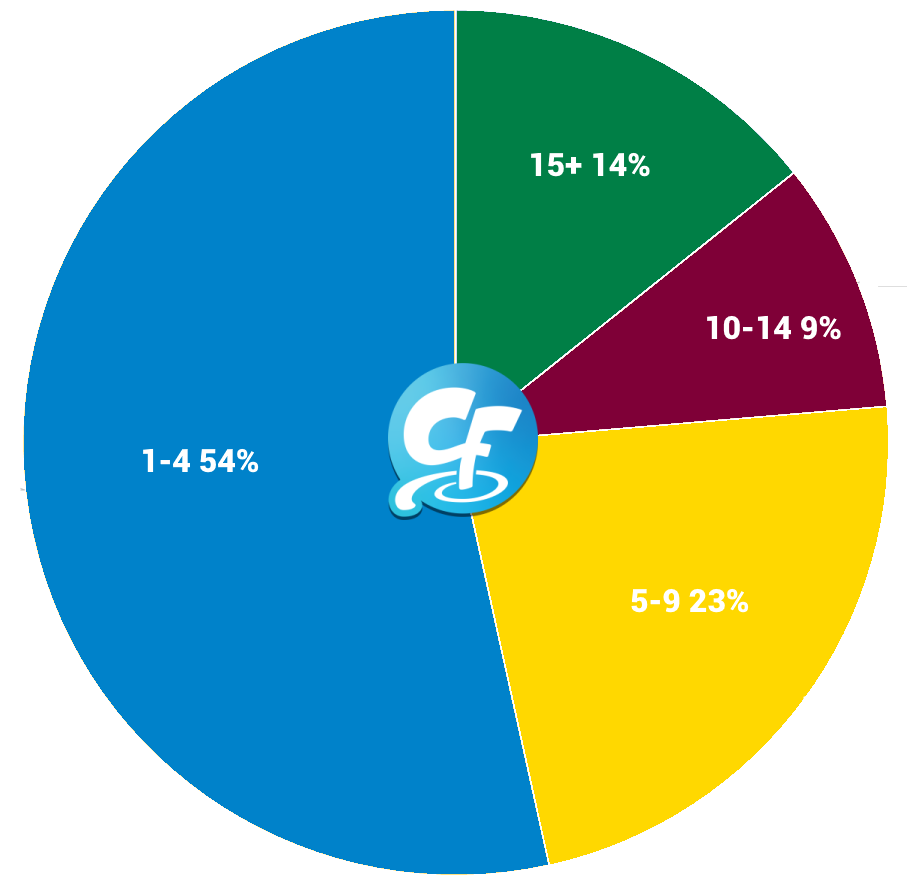 We salute the hardcore 14% who can’t get enough of theme parks! We’re quite surprised that nearly three quarters of people visit fewer than 10 different theme parks a year, and that half visit no more than four! We thought that the “5-9” bracket would be the clear winner in this category. Why is this? Are multiple park visits too expensive? Is it difficult to travel to them? Or are people simply cutting back on trips? This is a question we’ll definitely repeat and expand upon next year. Or maybe the best value is a season pass and loyalty to a particular park…

Do you own a season pass? 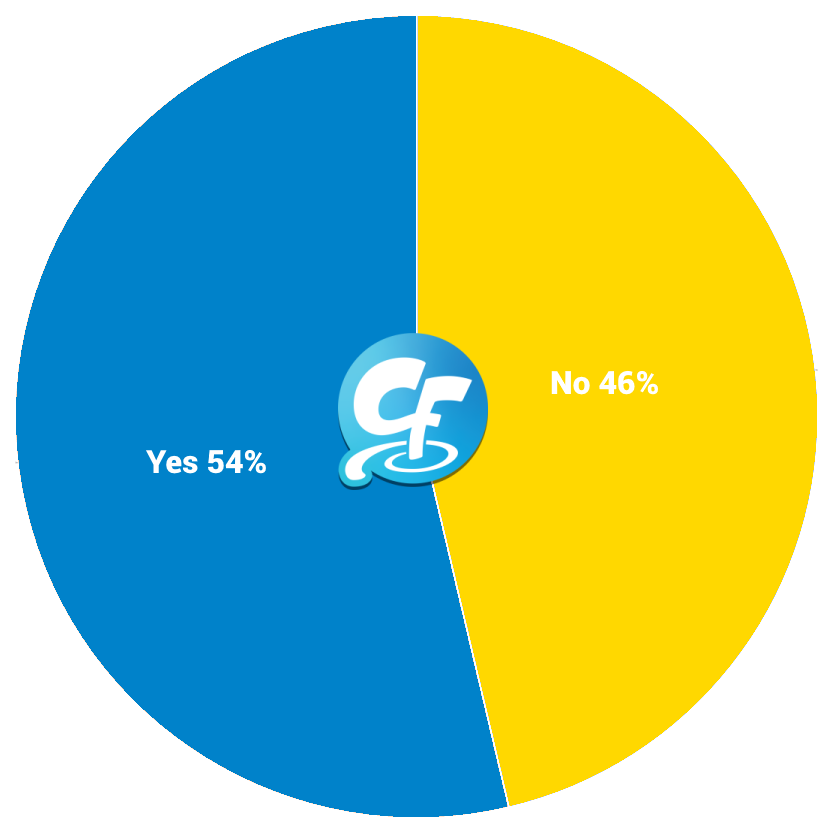 Hmm, nearly evenly split. Although most people own a season pass, a considerable percentage don’t. Season passes offer great value if they cover several theme parks or you can easily visit parks on regular basis. 54% of people who said they own a season pass said they only visit 1-4 parks a year. Park loyalty, convenience and cost are presumably the major factors in this.

Who do you typically visit theme parks with? 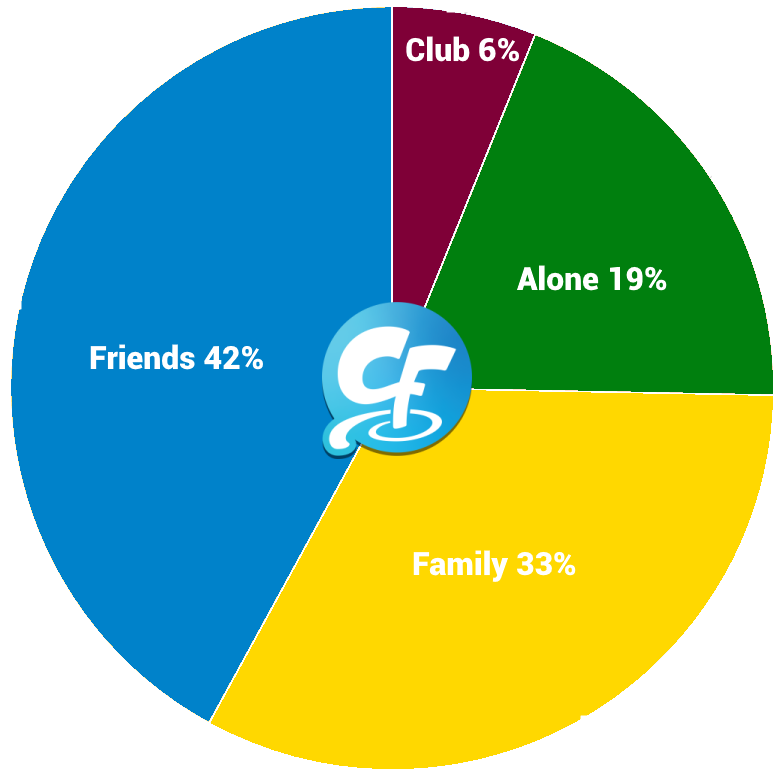 It’s pleasing to see that over 80% of people visit a theme park with somebody else, because we think this hobby is best enjoyed when shared with others. It’s nice to see that, although it’s a small number, clubs still offer an opportunity for people to meet up and enjoy parks. Clubs are where you’re most likely to make new theme park friends, so we could be cheeky and merge the two! And there’s nothing wrong with visiting parks by yourself…you can smash out the rides you want to do!

Have you ever run to be first on a roller coaster? 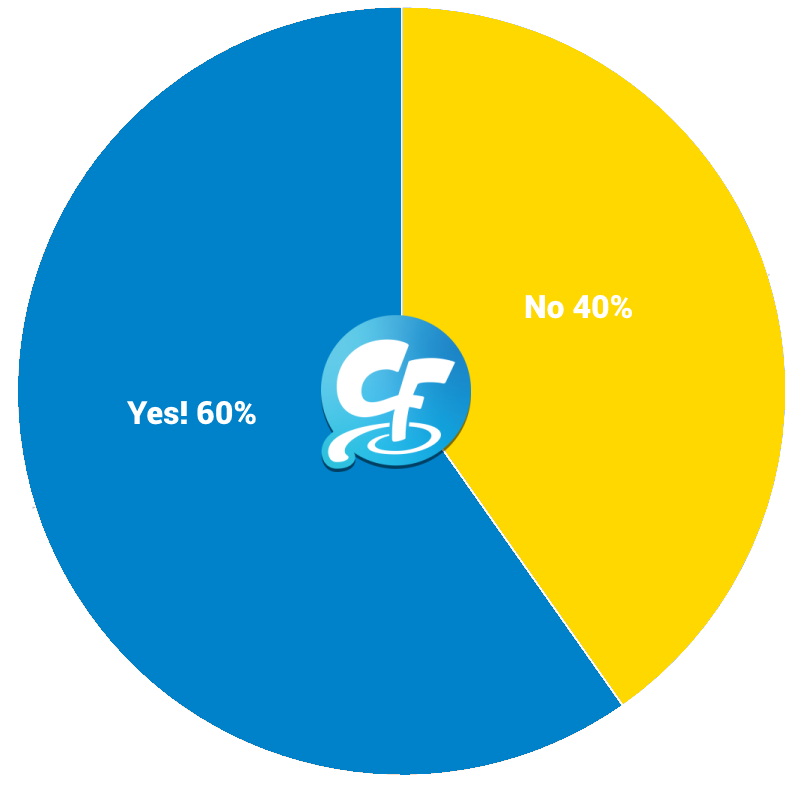 There may be a cultural aspect to this question, and we make no apology for sounding stereotypical here, but running to rides seems to be more prevalent in the USA than elsewhere. It would be interesting to have a nationality scale associated with this poll to prove this theory. 40% of people say they’ve not run to a ride but we’d bet our bottom dollar they’ve all slightly increased their pace and taken shortcuts!

What’s your favorite type of souvenir? 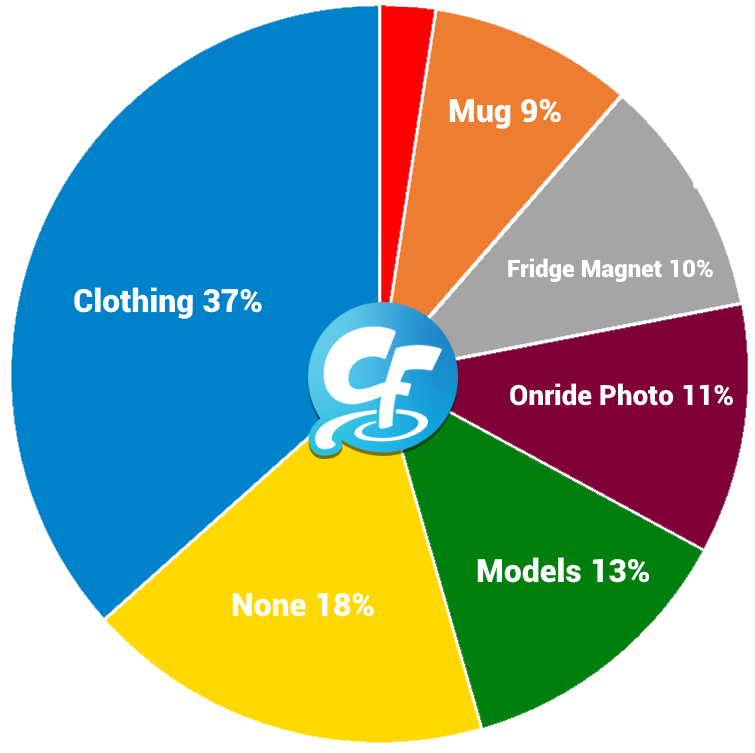 Ok, hands up. We know we missed out “pin badges”. Sorry! Clothing is by far the biggest winner here. There probably isn’t a goon who doesn’t own some kind of theme park related apparel. If you add up the stuff that you could use every day, such as a mug or a t-shirt, and then the displayable things such as magnets and toys (the red wedge), there is roughly an even split between the two types. All tat brings back memories! And while we’re here, here’s a quick plug of the CoasterForce Store where you can buy t-shirts, mugs, and even a pair of CF socks! 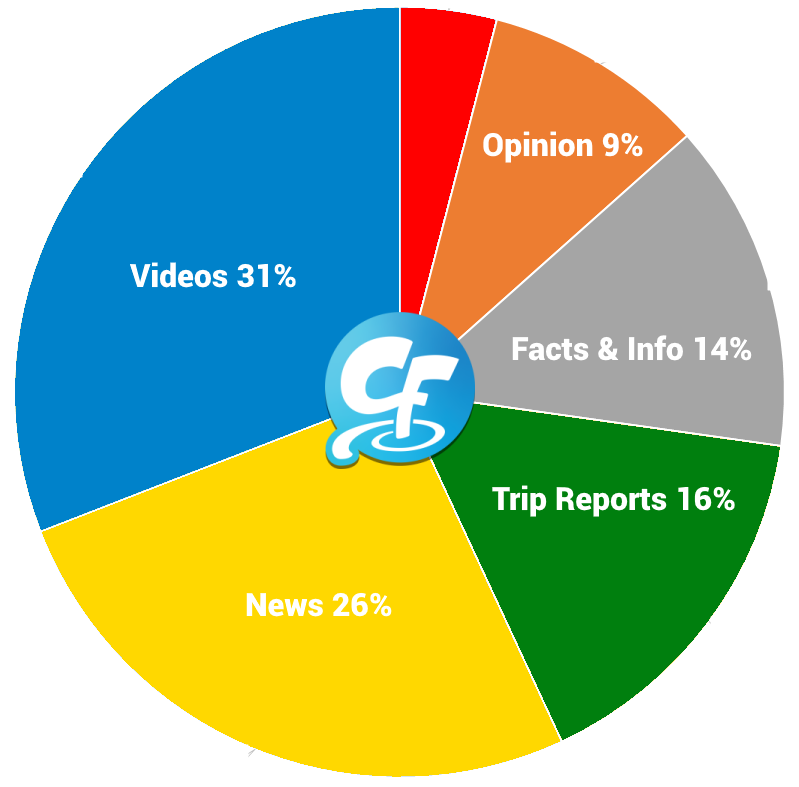 A mixed set of results. Let’s group the results into categories to see if there’s a trend. Factual (News, Facts) totals 40%, Media (videos, photos – red segment) totals 35%, and User Generated Content (Trip Reports, Opinion) stands at 25%. Factual information is what most people crave. User generated content is below what we predicted despite the number of goons actively sharing their trips and thoughts on social media. 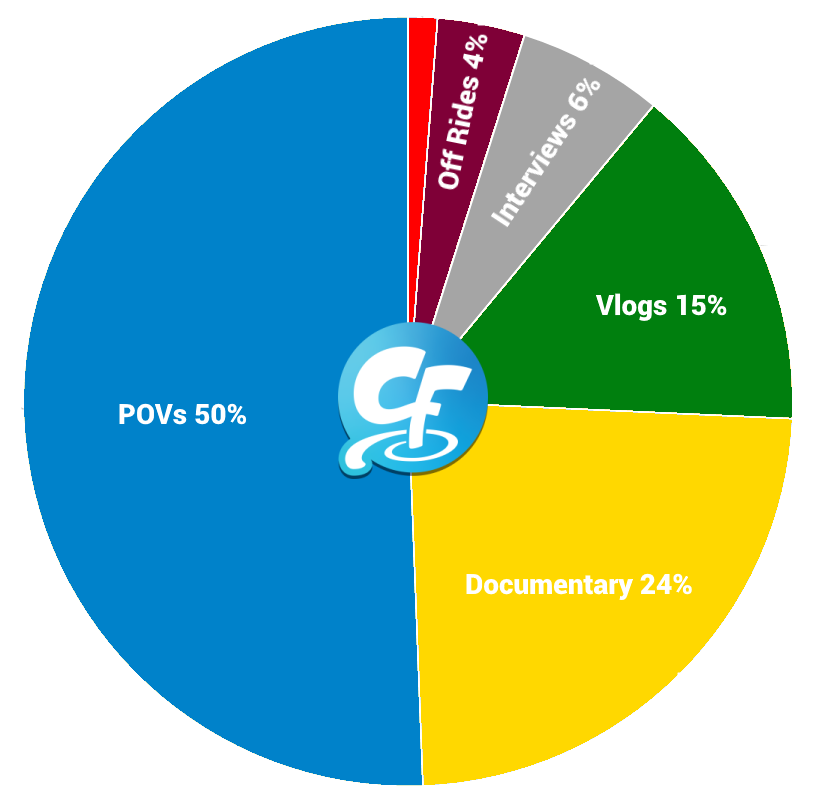 No shocks here. POVs are by far the most popular type of content on the CoasterForce YouTube channel, so this is what we expected. Vlogging is a seemingly upward trend, but it doesn’t rank as high as factual and educational content. The red section is “camera trickery”. 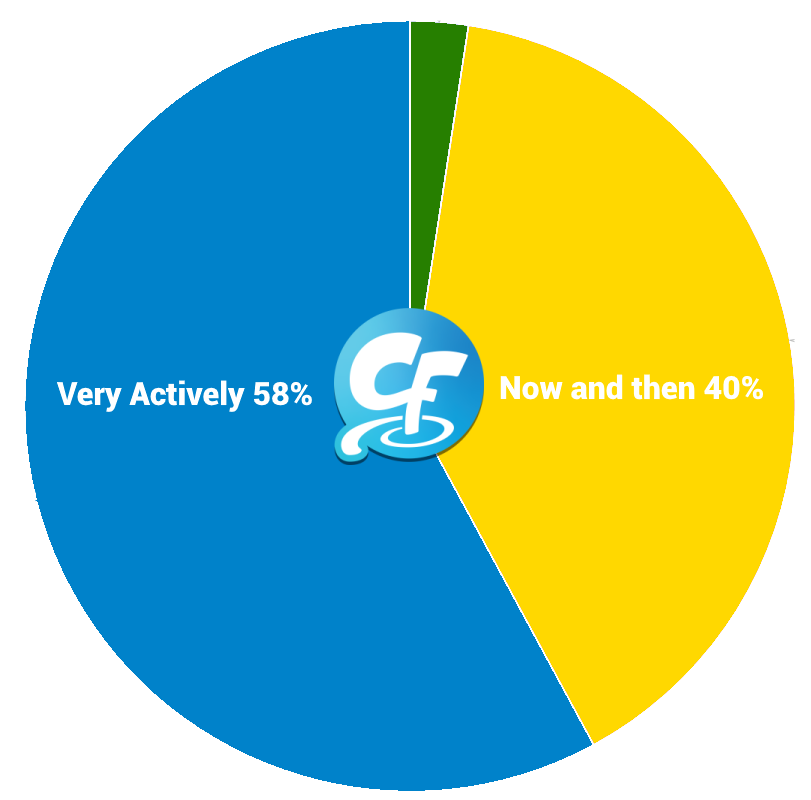 It’s not just about riding roller coasters – people like to read and watch them being built, too. It’s always been exciting to see a new coaster rise out of the mud, especially one that’s your favorite type or at a top park – 98% of goons agree! You can follow and discuss worldwide coaster construction on our forums. 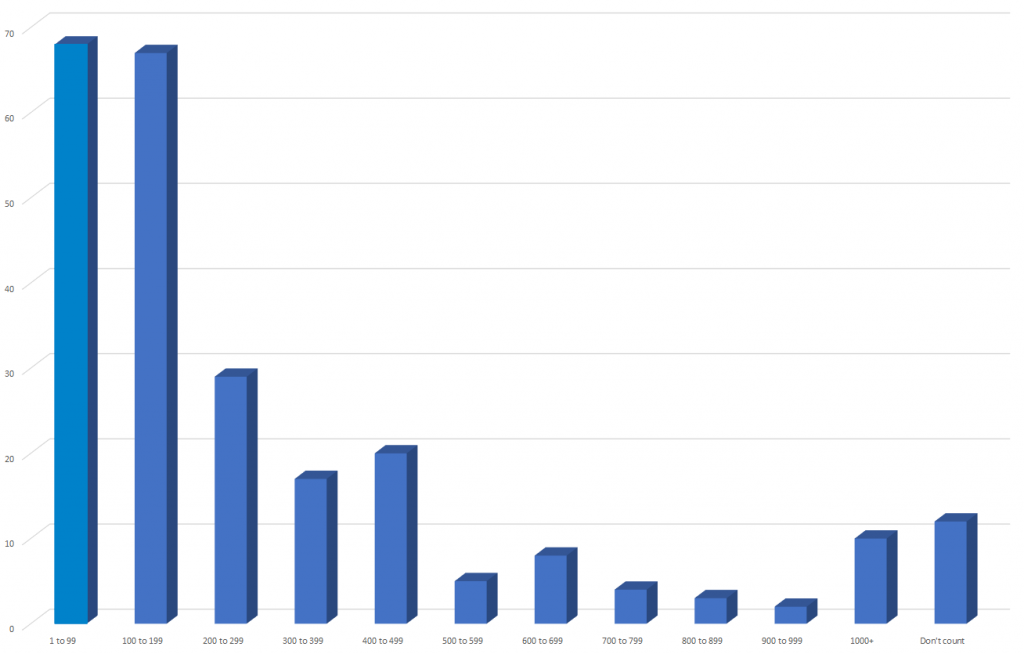 We’ve presented this by number, rather than percentage. A lot of people have a coaster count under 200, possibly due to lack of opportunity to travel or they may be new to coaster enthusiasm. The jump between the 900s to over 1,000 ranges is cool – there’s certainly a group of die hard coaster counters out there!

What do you think of the results? Do you agree with our insights and comments? Please let us know in our discussion topic or tag us on social media!