We are celebrating our 20th birthday! We’re quite proud and very grateful that during the last two decades, CoasterForce has, in some shape or form, been part of your roller coaster life. We’re celebrating our big birthday milestone with a look back over the past 20 years and giving away loads of theme park tat! Click the headline for more information

This is not your typical “best roller coaster” survey! We want to ask you what you love about roller coasters and what you enjoy the most about your hobby! You have until August 14th to submit your answers and we’ll reveal the results on Roller Coaster Day, August 16th! Click the headline to take our Roller Coaster & Fandom survey today!

GaleForce, the 125 foot tall S&S triple launch coaster opening at Playland’s Castaway Cove this summer, was topped off today. This is one of three new coasters opening at the park along with a SFB Visa Group spinner called Whirlwind and a 50 foot tall E&F Miler family coaster named Wild Waves that will circle around GaleForce twice.

Dollywood went ahead with the scheduled Lightning Rod media event today in spite of the coaster’s delayed opening announced last week. Dolly Parton made an appearance to welcome guests for the 2016 season, answer questions from select members of the media and perform a musical number.

The park also confirmed that the delay is due to safety and optimal performance concerns from Rocky Mountain Construction, the ride’s manufacturer, surrounding the world’s first launched wooden coaster.

Busch Gardens Williamsburg announced today that the park will build a GCI (Great Coasters International) family wooden coaster scheduled to open in 2017. The announcement came during the park’s Passholder Preview Day event. The coaster will be 74 feet tall with a top speed of 48 mph and have a Viking theme featuring nine airtime hills.

The name hasn’t been officially announced as the coaster will be the first “crowd sourced” ride giving fans the opportunity to shape various experiences for the coaster including the ride’s name. Fans will have until 1. April, 2016 to choose either Viking Raider, Invadr or Battle Klash as the name by visiting this webpage.

Kings Dominion held a media preview event today for Delirium, the park’s new Mondial Revolution rotating pendulum ride. The 75 foot tall attraction swings riders 115 feet into the air at a 120° maximum angle and is scheduled to open to the public next week.

The huge swinging ride seats 40 passengers and is one of only two located in North America, the other being Psyclone at Canada’s Wonderland near Toronto, Ontario.

Universal Studios Hollywood will bring the Walking Dead AMC TV series to life with this frightening zombie attraction that is scheduled to open this summer. The walk-through dark horror maze will be a year round experience and will be located in the former House Of Horrors, but little other information has been released.

Today Six Flags announced that the New Revolution at Six Flags Magic Mountain will be one of nine coasters in the theme park chain that will be getting the Virtual Reality treatment. There will be two different VR experiences: an alien invasion and a Superman themed encounter. The other coasters featuring the alien battle experience are: Shock Wave at Six Flags Over Texas, Dare Devil Dive at Six Flags

Over Georgia, Ninja at Six Flags St. Louis, Steamin’ Demon at Great Escape and Goliath at La Ronde.
The Superman experience will be featured on Superman Krypton Coaster at Six Flags Fiesta Texas, Superman The Ride at Six Flags New England and Superman Ride of Steel at Six Flags America.

The much anticipated Flying Aces coaster opened at Ferrari World Adu Dhabi today. The Intamin wing coaster is the second of its kind following Skyrush at Hersheypark and has many similarities like the accelerated lift hill, over-banked turns and ejector airtime hills.

However, it also boasts a record breaking 170.6 feet (50m) tall non-inverting loop that features a barrel roll at the top!
The nearly 207 foot (63m) tall, 75 mph (120 km/h) coaster is themed around a famous Italian World War I pilot with a bi-plane styled train. The barrel roll was just one of the many simulated bi-plane maneuvers, which includes numerous, quick 90-degree twists and turns.

CoasterForce4 days ago
We were invited to ride and film #Phoenix at Deno's Wonder Wheel Amusement Park during testing. What we weren't expecting was how great the coaster is already running and taking the rides with the construction workers, who had just finished laying the first layer of asphalt around and under the coaster.
Check out the on-ride video we posted on our Youtube channel: https://youtu.be/_iKD2UQuNGM

CoasterForce @CoasterForce
4 days ago
We were invited to ride & film #Phoenix @WonderWheelPark during testing. What we weren't expecting was how great the coaster is already running & taking the rides with the asphalt workers.
Check out the on-ride video we posted on our Youtube channel: https://t.co/iZ58U6chBR https://t.co/S3RLyJSBkj
View on Twitter 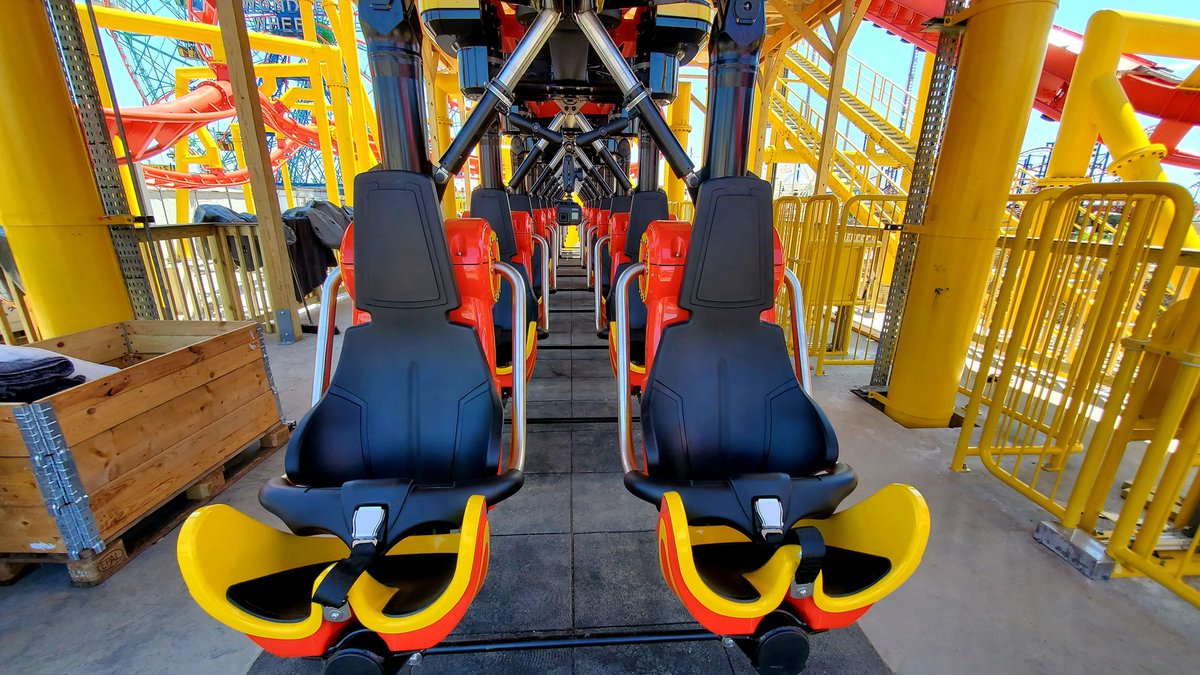