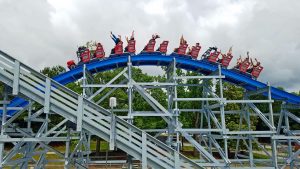 Originally constructed by the Dinn Corporation, Georgia Cyclone opened on March 3, 1990 and in 2012 approximately 30 percent of the coaster’s track was replaced with RMC’s Topper Track to provide a smoother ride experience. Georgia Cyclone closed on July 30, 2017 to begin the conversion construction.

Twisted Cyclone is RMC’s 10th I-Box track conversion coaster and the seventh for a Six Flags park, with two others currently under construction at Walibi Holland and Nagashima Spa Land in Japan.

See what our members are saying about Twisted Cyclone in our Forum discussion.