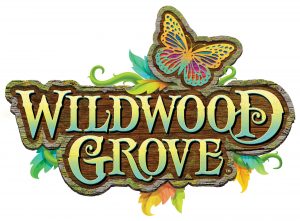 August 4, 2018 – Dolly Parton presided over the announcement of Wildwood Grove, the largest expansion to ever open at Dollywood in its 32 year history.  Featuring eight attractions that will debut in 2019, the expansion finishes the company’s commitment of spending $300 million on the park over a ten year period and does so four years ahead of time.  It will be the first themed area added to the park since Wilderness Pass opened in 2008.

The largest new attraction to be added is the Dragonflier, a Vekoma suspended family  coaster that’s a clone of Orkanen at Fårup Sommerland in Denmark.

A wide selection of family rides will include Black Bear Trail, a “Pony Trek” ride from Metallbau Emmeln, a set of Larson Flying Scooters named the Mad Mocking Bird, and a trio of new rides from Zamperla including the Sycamore Swing, a traditional pirate ship, Treetop Tower, a Samba Tower featuring gondolas themed as giant acorns, and Frogs & Fireflies, a small Jump Around kiddie ride.

Another attraction will be Hidden Hollow, a large climate-controlled indoor play space with climbing structures, slides and a variety of games. Wildwood Grove will also have a new restaurant, Till & Harvest, featuring “Southern inspired, Southwest-fresh” items on the menu.

In order to create the desired grove-like atmosphere for the area, Dollywood is spending nearly $1 million on 400 trees and 1,000 shrubs.

See what our members are saying about this huge expansion in our Forum discussion.