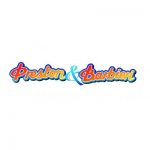 The first coaster created by Barbieri was Cosmic Coaster, a Wacky Worm children’s coaster at World’s of Fun, Kansas, USA. Cosmic Coaster opened in 1993 and was originally called “Wacky Worm”. The park changed the name in 2001.

The first coaster to be built by the then-newly formed Preston & Barbieri was another Wacky Worm at Sofia Land in Bulgaria.

The Double Race Coaster is a racing/dueling type coaster. Using a Möbius loop track, two trains leave the station side-by-side on seemingly separate tracks. Throughout the ride experience, the two trains race alongside one another and duel on occasion. One train will typically beat the other back to the station dependent on the load weight of the entire train. Due to the Möbius loop track, the trains appear to have switched sides when they return to the station. Preston & Barbieri’s first Double Race Coaster, Nitro, opened in 2010 at Dennlys Parc in France.

The remainder of Preston & Barbieri’s coaster production is of the family and kiddie variety most suited for young children. The first Family Coaster to open was Aile Treni at ParkAntep in the Netherlands.
The Coaster Mini is a smaller variation of the company’s Family Coaster, typically found in indoor Family Entertainment Centres or in park areas for young children. The first Coaster Mini, Stampbanan, opened in 2013 at Liseberg in Sweden.