Really like the look of those cars! Very good effort from Mack and SDC there.

I guess I forgot to post these photos. Here are photos from inside the maintenance bay/queue line
http://www.midwestinfoguide.com/2017/11/time-traveler-construction-sdc_12.html 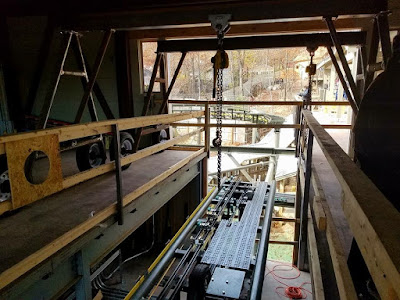 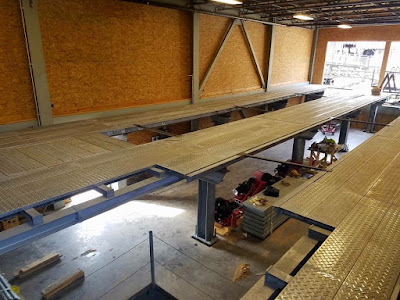 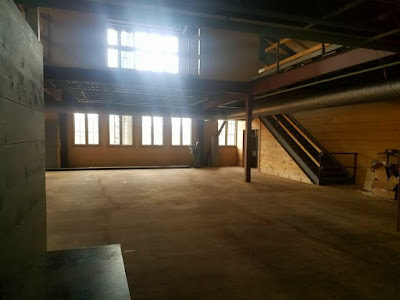 New photos from Wednesday. Progress on the shop
http://www.midwestinfoguide.com/2017/11/time-traveler-construction-sdc_22.html 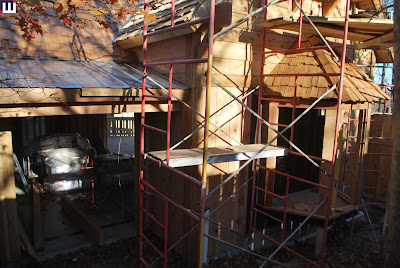 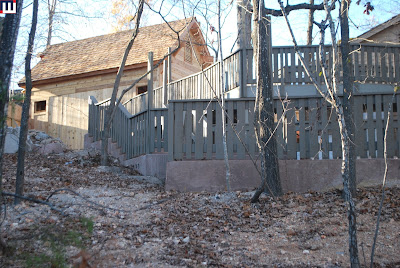 Remember when we talked about the braking mechanism for the spinning? The big round plate with the holes could be a round eddy current brake as I suggested. Did anyone take a closer look at it?

Great to see that the trim takes every ounce of fun out of that drop, as expected. Well, at least for the first and second car, anyway...

Staff member
Social Media Team
We knew it would be trimmed on the first drop, but, Jesus Christ, that's a harsh trim.

I don't personally think that the bit after the drop looks particularly slow. I don't know about any of you, but I reckon that the trim on the first drop will sort of function like the trim on Takabisha's first drop and terrify people by holding them over the Ozark mountainside.

On a side note, I'm struggling to visualise what this ride will feel like to ride. The only spinners I've ridden are Spinball Whizzer, Dragon's Fury, Primeval Whirl and Cobra's Curse. I know full well that it won't feel anything like the first three, but I reckon the spinning sensation on this could share some similarities with the spinning on Cobra's Curse, what with them both being made by Mack and sharing a similar track design, which is a good thing as I think Cobra's Curse is an underrated family coaster. What do you guys think?

Yeah this is definitely opening at the beginning of SDC's season in March (I think?)

Yeah, you're all on drugs if you think this looks slow in the back:

Antinos said:
Yeah, you're all on drugs if you think this looks slow in the back
Click to expand...

I don't disagree, but I still don't think it (the coaster) looks that good.

2. Why are the water dummies wearing robes?

3. As lovely as I think the Time Traveller logo is, I ****ing hate how two thirds of these videos is just the logo. I'd rather then just stop the video at 8 seconds.
Last edited: Dec 22, 2017

You are also on drugs if you think that drop "doesn't look that good."

CoasterMac305 said:
You are also on drugs if you think that drop "doesn't look that good."
Click to expand...

I think the coaster "doesn't look that good". Sorry, I should have been clearer. Edited for clarity.
B

Social Media Team
It looks decent in the back, but, come on, in a park with Outlaw Run already ejecting guests down a much better drop I'm going to need more than that to impress me.

How do you know Outlaw Run will have a better drop? For all you know this could be much better.

^ But only if you're in certain seats? I'm not sold at all. Not yet, anyway.
I know it's not open and it's yet to be ridden, but nothing about this coaster is making me want to desperately ride it.
Last edited: Dec 23, 2017