Wildfire in the fog today, one of the best. 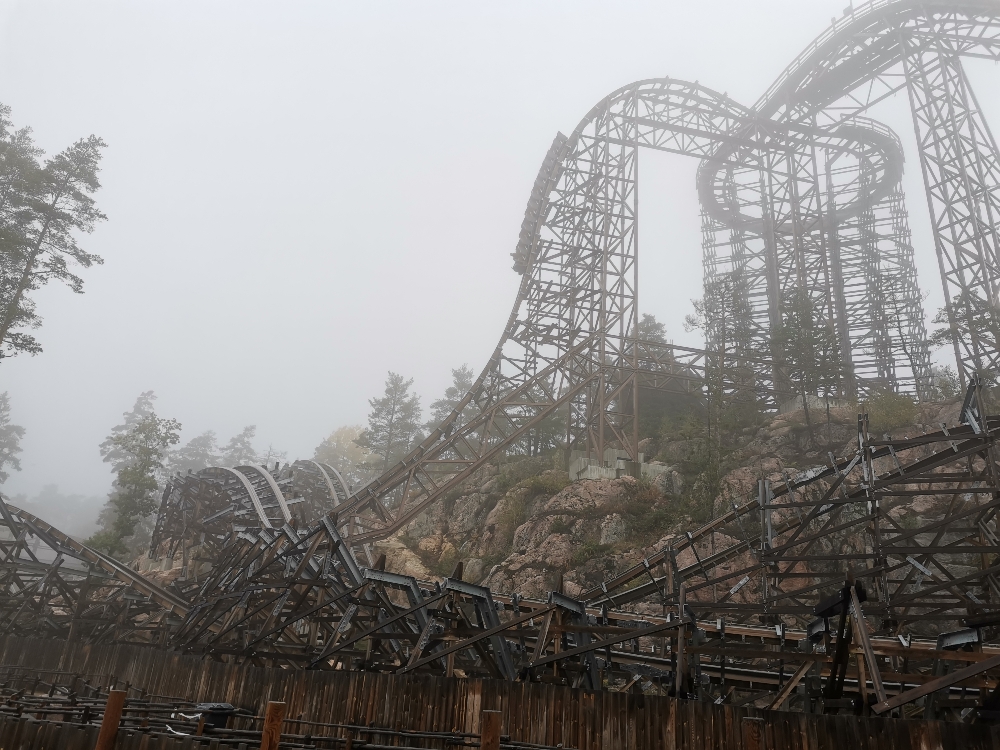 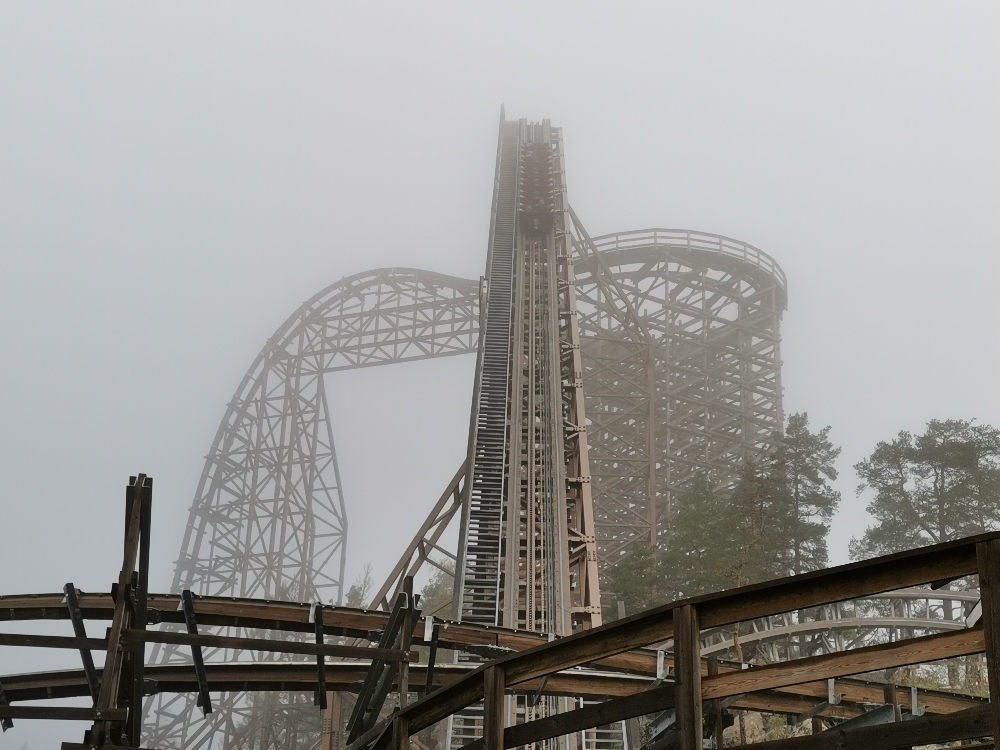 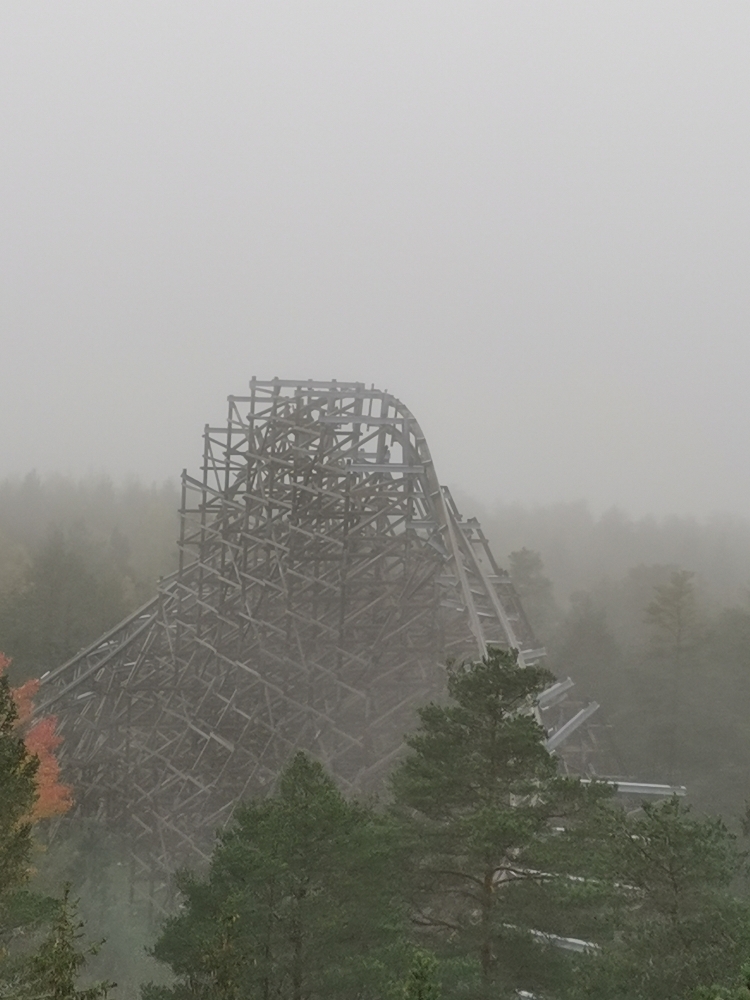 Just when I thought I’d be having an entirely coaster-free 2020, I managed to visit Nickelodeon Universe in New Jersey today for the first time. Indoor parks usually feel sterile to me, but going in with very low expectations meant I wasn’t disappointed. The park charges $63 for a mere four hours (two shifts a day, with cleaning in between), so I chose the early shift to avoid the crowds — and it worked, as I was the first one in the park and managed to get zen rides on four out of the five coasters in the first half hour. Shellraiser, though, was down all day and opened up with only 18 minutes left in the session! (With me on the first train.)

Some random thoughts:
—Slime Streak is better than the equivalent coaster at the Minnesota park.
—The park offers crazy hang time for those into that (Sandy’s, Shellraiser, disc ride).
—Sandy’s Bucking Bronco is fun, with a unique layout, but a little rough.
—The biggest surprise of the day was Shellraiser, which I rode in the front row. A fun layout, but extremely rattly. Not a mild rattle that slightly disrupts the aesthetic experience if you notice it, but a major rattle that makes enjoying the coaster a challenge. The fact that this is the case with a coaster this new is really a worry.

Overall, though, I had fun, and got five credits in an otherwise cred-free year.

Orion at Kings Island was my last new credit! I rode it on July 8th and got 2 rides on it, and I thought it was fantastic! My first ride was great, but my second ride I thought was a better experience. The "wave turn" provides such a unique sensation of airtime and I loved it! Each airtime moment is different from one another. If there's one downside, I'd actually say the helix, which I didn't think provided any forces at all.

Very, very impressive as an overall package. Went in completely blind having avoided all reviews and spoilers, it did not disappoint.

Vekoma have completely nailed it with this ride system and I'm sure we will be seeing a lot more of these pop up in the next few years. As expected, the ride is smooth as glass - there are moments the ride whizzes over your head and you don't even notice, it's completely silent.

Got 3 rides in and found each of them suprisingly intense. It's very forceful in places and your body weight is pressed down into the restraints which can be uncomfortable. They're very hard compared to those found on the B&M versions.

Didn't get a front row but the back row was excellent, the ride goes on forever. Great addition to a world class theme park.

Staff member
Moderator
Social Media Team
Have you ever ridden a roller coaster for the first time at night, and it seemed way more fun than it should have been? That was the Big Dipper at Camden Park for @Antinos and myself when we did a Saturday marathon trip.

We arrived ~9 PM at the park, with a pretty dark night ride in store. Overall Camden Park is one of those trolley stop parks that seems to have been lost in time, only sporting a few modern additions over the last few decades. The Big Dipper is no exception, a relatively middle-of-the-road design for it's 1958 vintage - complete with NAD train and manually-operated braking; not much, if anything, has been tweaked over the last 62 years!

Having absolutely zero clue what the layout was, we climbed aboard and set sails on the layout. When the lift hill begins to physically warp the train; you know you're in for some ratchet ride. Overall the ride's simple dips and drop were pretty enjoyable (largest drop is only 35 ft.), but with the old-school train design and non-restricting lap bars, you are quite literally standing in your seat! A very favorite moment was when the train entered a tunnel - which @Antinos and I didn't realize was on the ride. While it was a simple turn and drop, we were cackling with laughter having zero clue exactly where the train was heading.

Hey, it's the little things this year that make life worth living. Even super sketchy woodies built in West Virginia.

I finally got down to Nickelodeon Universe and the last cred I got was TMNT Shellraiser. Every ride at the park I rode front row and by myself. Shellraiser is definitely the best there but I did also really like Sandy's Blasting Bronco a lot. I haven't watched any POV's for a while so I had pretty much forgotten what anything did there and I completely forgot there was a launch on Shellraiser. The launch was good, the drop was fun, its cool to say I've been on the steepest in the world now. I loved all the inversions. It was definitely a super solid ride. However both this and Shredder both had some rattling moments to them and Shredders nonstop spinning on the break run really messed with my head but overall I loved the place and it was fun to basically have an amusement park to yourself. I also started vlogging and filmed it if anyone wants to check it out!

I managed to get down to West Midlands Safari Park today and get my first ever ride on some of their coaster credits, which was nice; always good to get a +2 for the count!

Monkey Mayhem was... well, a pretty typical Reverchon spinner, really. I've done 6 of them now, and I'd unfortunately have to say it was probably the roughest one I've done yet, but I did like the monkey-themed cars!
2/10 (1 star)

Rhino Coaster was perfectly fine for what it is. The only other 335m Rollerskater I've done is Flight of the Hippogriff at Islands of Adventure, and it rode pretty similarly to that, to be honest, if possibly a little smoother. Hippogriff does unsurprisingly have the theming advantage, however, although I wouldn't have expected WMSP to come anywhere close to Universal's theming with their substantially smaller budget.
4/10 (2 stars) on overall spectrum, but a perfectly fun family/junior coaster.