peep said:
I don't understand why they didn't clean the tile roofs on the buildings, they look so gross. Takes away from any lick of paint they've given the rest of the buildings. Everything about this looks cheap and tacky and I don't get why it is getting so much praise on social media. In fact, why is this even in the "Yay Merlin!" topic?
Click to expand...

Just to add a bit more negativity, the boats are also still the same and look tired. The actual ride its self is very dirty. 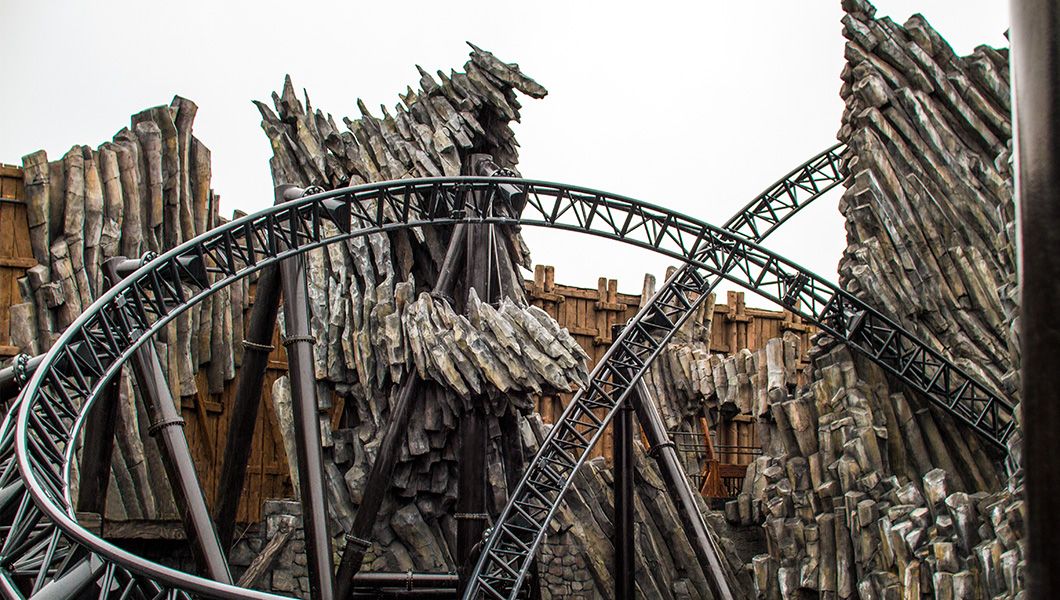 Oh wow! I never even noticed that! But now you've said it, I can't unsee it!

ATTACKHAMMER said:
Myself, Ian and Jordan went to the press day today.

The ride area is quite nice and vibrant:

When you go down the main drop the tiger skull looks quite naff.

Worst thing about the re-theme is this though:

Think it looks dreadful, proper half arsed job only salvaged by the actual tigers. The garish orange buildings with the same grotty roof tiles is just a complete contrast to what could be a very nice area. The drop doesn’t look too bad but honestly think that bodged dragon head cover up sums up this project.

FFS. Looking at the photos, what doesn't look bodged looks garish, and a lot of the atmosphere and character that the area had just seems to be gone. I don't know how best to describe it - it's almost as if the whole area is now a poor imitation of its supposed theme, rather than being anywhere close to immersive.

MouseAT said:
Damn it, in typical Merlin fashion, they've managed to take something else that was a bit worn but otherwise pretty decent, and make it worse. They've done it with Duel, they've done it with Dragon Falls, and I hate to think what's next.
Click to expand...

Chessington's Mine Train and XNWO? I suspect I could go on...

FFS. Looking at the photos, what doesn't look bodged looks garish, and a lot of the atmosphere and character that the area had just seems to be gone. I don't know how best to describe it - it's almost as if the whole area is now a poor imitation of its supposed theme, rather than being anywhere close to immersive.
Click to expand...

To be fair, I personally think Duel's latest TLC is an improvement. I'm not saying it's perfect, but I don't think it's fair to say it is any worse than it was before. The TLC has made the ride feel much fresher, the new music is much more atmospheric atmospheric than the old, the new lighting – whilst it still need some adjustments in some scenes, notably the screaming heads scene and the flying bats scene where the mechanisms are now lit up, it's actually pretty good in creating a spooky atmosphere. Some of the scenes have been improved massively because of the Towers Loving Care renovations, and whilst the ride as a whole is certainly not perfect, with further adjustments, I think they could probably get pretty close to that.

Another PR trick where Merlin jump on the coat-tails of a news story, but fair play to them this one's fun and might make some difference:
https://www.manchestereveningnews.c...oland-northern-rail-train-manchester-14774184

Went to Chessington today and had a really decent time. I was a bit anxious what with it being a weekend but the most we queued was half an hour and in six hours we got on all the major rides bar Tomb Blaster and Kobra as well as some shows/feedings and zoo mooching.

The ride line up is actually very good for a park of its scale. Dragon's Fury is the perfect family coaster, really toes the line between being intense with some airtime and not being too intimidating for kids. Vampire is showing its age and shuffles round the track in places but it's long and that dive into the tunnel feels fast and exciting. I'd ride this over the SFC at Paultons any day.

Tiger Rock is really good too, love the lighting and loud music in the station, it's a great atmosphere in there. The layout is pretty average but there's always something to look at and the effects in the tunnel are fun.

Can't really be arsed to run through all the rides but on the whole it's a nice selection. Also the park is small which I love, can't stand walking 5+ minutes between attractions. There's light theming and nice buildings which make it a pleasant park to be in. The soundtracks are fantastic too, especially Tomb Blaster and Black Buccaneer.

I came here as a kid a lot in the late 90s and early 2000s and yes, the place is an absolute state now compared to how it was back then. The lack of new rides in the last ten years or so is really worrying and the African homogenisation of the park is very bland compared to the stark contrast of differently themed areas the park used to have. Operations aren't great either, the queues all move very slowly, the Fury one is particularly agonising. The highest throughput rides I went on today were Tiger Rock and Gruffalo which were probably only getting 800pph tops. Even Legoland has some rides that can achieve over 1000pph and that park is awful for queue times.

While the park is a shadow of its former self and has serious flaws there's still some fun rides and a pleasant atmosphere. I know it's very on trend to hate on Chessington but on balance I do quite like the place. Maybe that's just nostalgia though.

Lot of action in the "WTF Merlin" thread recently.

How about this for a bit of YAY Merlin then; out-think-the-Roper-mentality-before-it-gets-messy?

Can't see the old biddies making so much noise it will upset the rollercoaster riders.
I've got it wrong again haven't I?

and after a quick search...

Hardly surprising Merlin are saying "bad idea" - I mean come on!
Darker purple area is where the planning application is for!

Link to plan RU.18/0703
(lot of documents on that planning site related to this - can read all the objections from Thorpe's lawyers and stuff, seems this has been going on for quite some time, crickey!)
Last edited: Apr 10, 2019

I'm just going to post the same thing I posted on Thorpe Park Mania, after having had a quick flick through...

It's very close to a major back of house service road used by the park, as well as the island behind Stealth/Swarm which will probably have a new coaster put on it the next 20 years (hopefully..)

It has been discussed since last summer, and is clearly a bad idea given it's proximity to the park and it's service roads. I wouldn't be keen to live there; why would people needing a retirement home want to?

Quotes from Thorpe's representative taken from their letter of objection letter to the council...

We also note that Merlin met the applicant in the initial stages of the application and has been seeking a further meeting to discuss the issues raised in this letter. While Merlin very rarely comments on applications and always seeks to take a positive and direct approach to engagement with local landowners/developers to overcome potential issues, their concerns about the significance of these proposals for Thorpe Park’s future mean it must protect its position.


It is therefore concluded that the proposals do not comply with national policy or guidance, nor are they considered to align with RBC’s emerging Local Plan. The evidence submitted in support of the application appears insufficient and ultimately down-plays the significance of the noise impacts and associated effects. We therefore consider that the applications should be rejected as a departure from planning policy.

It further mentions that the noise assessment carried out by those planning the retirement home (which says the noise levels would be fine) were carried out improperly, and probably understate the amount of standard noise. That could cause major issues if the development went ahead.

Quite interesting reading (well just skimming really) some of that correspondence ; one side is all "come on you know this is just bat-**** crazy, the OAPs are gonna complain to high-heaven about noise day in day out let alone if we put in a planning permission for a new gift shop" and the other side is "well we know theme-parks are noisy but what if we took noise readings at night or from similar theme parks (and we could not find anyone else to sell the land to)".

If it really doesn't comply with local/national policy it should get thrown out but it depends how lenient the local authority is because there can be exceptions. Hard to know without knowing the local authorities' past actions and specific local/neighbourhood plan policies.

In short, it could go either way (disclaimer I've not actually read all the documents, just the posts here).

Edit: Had a look at some documents. The local residents society has also objected citing its location in the green belt which is a considerable point and that the site is metres from flood risk areas. IMO enough evidence exists for it to be rejected if the council want to do so but it could still go through depending on how the council views these kind of projects.
Last edited: Feb 14, 2019

Councillors will just end up being given a few extra free tickets to some concerts or sports events and a bit of extra wining and dining and it'll get granted.

davidm said:
(and we could not find anyone else to sell the land to)".
Click to expand...

I was thinking that but surely Merlin must have thought about purchasing that piece of land if anything just to protect their investment and stop anything silly like a retirement home being built there. Would make a nice hotel location too.. Would have made a hell of a lot more business sense than DBGT