With a new Star Wars film coming out in just a few days, this seemed kinda timely.

Currently my list looks like this, but expect an update once I've seen Rogue One..
1. Return of the Jedi. Always been my favourite, this one. Most fans diss it due to Ewok hatred, but I quite like them. And the climax, where they fly inside the Death Star to blow it up, while Luke dukes it out with Vader and the Emperor? Awesome.

2. The Force Awakens. Yeah, the new one. I loved it. Felt right at home from the very beginning. Instantly connected with the new characters, and as the old timers were gradually reintroduced it just got better and better. Exciting, inventive, bags of energy and lots of fun. Who cares if the plot is an almost exact rehash of A New Hope.

3. Revenge of the Sith. The dark one. I just like it. Some good actiony bits.

4. A New Hope. The original one. Still firmly in 'love it' territory here, but I have to admit it's starting to look a bit dated now, a bit... unpolished.

5. The Phantom Menace. The one with Jar Jar. Yep, I like this one too. Took a while to warm up to it, but it's got better with age. And the pod-race!!

6. Attack of the Clones. Now we're getting to the ones I ain't too fussed on. This was disappointing. Every time it started to get good, it quickly petered out again. And the lovey dovey stuff between Padme and Anakin was just awful.

7. Empire Strikes Back. Controversial, but nah man, this one's just boring. By the time I saw it, the fact that Vader was Luke's father was common knowledge, so the ending held no big surprise for me. And nothing gets blown up.

ESB at the bottom - you clearly need mental help!

The correct order is:

That's it. There are only six films as far as I'm aware. I heard there was an Episode II but if there was I have completely eliminated it from my memory...

^I just don't get why people dig ESB so much.
It's everyone else who needs mental help, I'm the only sane one.

Staff member
Administrator
Moderator
ESB is the best written, best directed and with the best story. It's also the darkest and the absolute pivotal moment in the original trilogy (whether you knew what was what or not).

Witchfinder is close, but ROTJ is awful, although the eyeball creature things in TFA are almost as bad as Ewoks. Oh, and Rey spending the first half of the movie going "GLEEEEEE - I'M IN STAR WARS!!!"

Also, Episode II I thought got a bad press. It has some utterly deplorable scenes, but I always thought it was an okay middle film. I hated Revenge of the Sith - it had one job "convince us why Anakin turned to the dark side and became Vader". It failed, miserably.

So I always held Episode II higher, as they're both essentially the same film. Anakin is by degrees sulky, irritating and obnoxious while he and Obi-Wan do stupid action things to move one CGI set piece to another in a pretence to a plot.

Then I rewatched Episode II as part of a binge session and it's abysmal. Really, really bad. Watch it next to ROTS and it's clear just how utterly dire it is. Like a really, really, really bad film - not just a bad Star Wars film. I also have a soft spot for TPM due to the Jedi duel, which I think is one of the best individual set pieces of the entire lot - though probably only due to the music. It's ruined though by Lucas doing the same split action bollocks that ruined ROTJ. Stick to a plot and scene and follow it through, don't have three action scenes happening at the same time and divide attention - it dilutes them all.

So the actual list is:
ESB, ANH, TFA, ROTJ, TPM (just - but it's bad) and ROTS (because it failed to do its one job). Witchfinder is right, 2 is best just forgotten.

Can we also include other stuff?

In terms of novelisation of the films, I love the original - really gory and fun. The Force Awakens novel also expands on the film a little. The others are close to the film material, but without the crap CGI, so are better than all the prequels.

See, that was easy

Why is Return so bad - its just awful ; remake the end of AHN (yes yes I know Abrams did that too, but at least that was a few films later), add the "family surprise" bits of ESB and throw in some teddy bears too for the merch (before they realised people would buy anything, it didn't have to be a fluffy teddy bear for crying out loud). Clones has the odd redeeming feature (theres a shot of a platoon of clone troopers walking away from the camera blasting away (just after they downed the starship in the Battle of Geonosis) that might be the highlight of the prequels) but far too much horrible CGI. Still better than Jedi though.

Anyway Rogue One on Thursday, expect it'll drop in the middle somewhere ; can't be as bad as the prequels can it? I like what the director has done visually in his films so far (even if Godzilla was a bit of a mess story wise) so should look good at least.

And theres this of course ; DO NOT WATCH, YOU HAVE BEEN WARNED 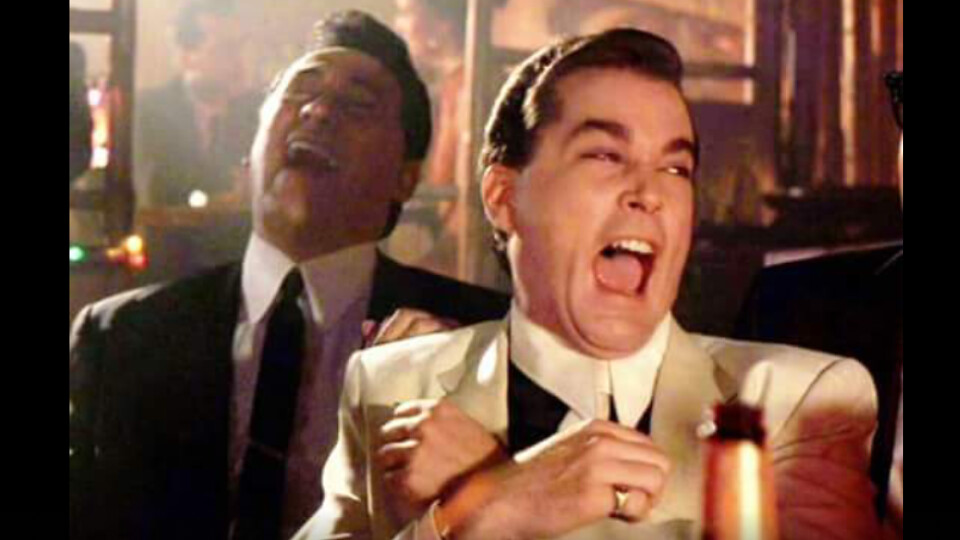 furie said:
Then I rewatched Episode II as part of a binge session and it's abysmal. Really, really bad.
Click to expand...

Yup, just gets worse every time you watch it... I stopped after 4 times I think. I've had the BluRay box set for years and still haven't touched the disc for Epsiode II!


furie said:
I also have a soft spot for TPM due to the Jedi duel, which I think is one of the best individual set pieces of the entire lot - though probably only due to the music.
Click to expand...

Agreed - for all it's bad points, TPM has the best Jedi Duel in the entire saga to date (closely followed by Anakin vs Obi-Wan to be fair) and the Pod Race scene was fantastic at the time, though it has dated somewhat.

Lego Droid Tales and Rebels were the two things that gave me confidence that Disney know what they're doing with the franchise. Whether it'll last remains to be seen, but Droid Tales' piss-taking of the prequels was enough for me to give them the benefit of the doubt.


davidm said:
And theres this of course ; DO NOT WATCH, YOU HAVE BEEN WARNED
Click to expand...

I'd rather watch that than Episode II. All of Chewie's relatives can act better than Hayden Christiansen!

Like most sane people, I also rank ESB as the best one by far, but I prefer AOTC to TPM, as the only thing I enjoyed in TPM was the epic Lightsaber battle;
ESB, ANH, TFA, ROTJ, ROTS, AOTC, TPM

This condensed version is well worth watching instead of slogging through all three prequels, although it does cut TPM down to just the lightsaber battle which fits me perfectly.

The Empire Strikes Back - It has the most going for it overall. Fantastic film.
Return of the Jedi - I love it from start to finish. I really don't mind the Ewoks and I don't see why some people don't like this one.
Revenge of the Sith - I love this film more than most. Loads of memorable quotes and moments and epic lightsaber battles
A New Hope - I guess not being nostalgic about it does influence my opinion, but it just seems a bit slower and less enjoyable than the ones above, which is understandable considering its age. The other two of the original trilogy have aged better imo. Still great.
The Force Awakens - I seem to love this less than most. It felt a bit "been there, done that" and I didn't like most of the characters. The villian is a wuss. Still a decent film.
Attack of the Clones - Pretty crappy, but overall just slightly better than the Phantom Menace.
Phantom Menace - Poor acting, lame story, it's only somewhat saved by Darth Maul's epicness and the last lightsaber fight.

Until you posted this, I didn't realise it was Howie! I read it briefly on my phone and responded to the posts - I didn't look at the author. I just assumed it was ATI or somebody.

Now I have concerns for anyone over the age of 40 who spends a lot of time in Telford - do you feel okay Dave?

^ I don't go to Telford anymore with work, so I've escaped that odd-inbred-teddy-bear-fetishness luckily.

1. Empire Strikes Back- arguably one of the greatest films ever made. I really have no issues with the film (which is rare for me). Every aspect is fantastic.
2. New Hope- has a good amount of prevalent problems (acting can be pretty poor at moments), but it is just so iconic and memorable. I can't help but love it. It has a special feeling to it that many films don't have.
3. Force Awakens- I was torn between this and Return of the Jedi, but I have to go with Force Awakens. I just blew me away when I first saw it on the big screen, and I can't forget the excitement I had in the theater that night.
4. Return of the Jedi- This was my favorite as a little kid. However, it is a lot worse than I remembered upon rewatching. The whole Ewok subplot just angers me, and it is a huge portion of the movie. Other than that, it is an enjoyable Star Wars movie with a few fantastic moments.
5. Revenge of the Sith- not nearly as bad as the other prequels but not good either. I find it perfectly alright. Acting seemed better, and the story at least seemed to have something to do. Still not a good movie (pretty poor honestly) but a masterpiece compared to the other two
6. Phantom Menace- a bit of guilty pleasure for me. It is awful, just absolutely awful, maybe even one of the worst films ever made, but there is something so baffling about it that I can't help but be entranced by it. It is such an interesting watch, and I would highly recommend checking it out. It is just amazing how poor the film is. Amazing.
7. Attack of the Clones- I can't even remember the plot of this movie, and I've seen it many times. So boring and, worst of all, just simply unmemorable. Nothing about it is good, nothing.

The one where Luke finds out his parentage.

The new one with the annoying robot and the space map jigsaw.

The one with the fish thing that talks in a silly voice. I'ma nota gonna watcha that one ever againa.

There endith my thoughts on Star Wars.
(I'm more of a Firefly lady)

^Uhm... yes.
Well, second only to Buffy.
Your point being?

I don't think it's an exaggeration to say that Firefly would never have existed if it wasn't for Star Wars...