1. Untamed. It's just the best.
2. Goliath. It's just the second best.
4. Joris en de Draak. Either side is really fab, it's just loads of fun and great in the dark.
4. Baron 1899. Love the theme, looks great, and more dive machines need zero-G rolls.
5. Fenix. This is a lovely ride in a lovely area. Best thing Toverland has done apart from moving the entrance.
6. Troy. Last time I rode you could tell it needed a bit of work, but it's still a great coaster.
7. Dwervelwind. Also very much up there in the lovely stakes. And some fabulous OBA.
8. Gold Rush. Short and sweet. Those 3 launches are a good laugh,
9. Dragon Fly. I really, really like this ride. How they squeezed this through a forest is just awesome.
10. Rodelbaan. Lots of points for uniqueness, and it beats Vliegende Hollander to the final spot because the coaster part of its ride is better.

If only Vliegende Hollander had a better coastery bit it would have made it. Also I’ve never had a good ride on Lost Gravity which is frustrating but I can only judge on what it was like for me.

1. Untamed, Walibi Holland - yh, duh
2. Troy (Troy) - haven't ridden it since I think 2018? But it was still awesome, especially at night as DesTroy!
3. Baron 1898 - short, sweet and to the point with some of the best theming on a coaster in the world (I said what I said).
4. Gold Rush - a really fun, infinitely rerideable no messing about coaster. Underrated in fact.
5. Joris en de Draak - sooo fun, again infinitely rerideable, awesome soundtrack. Shame about the dragon.
6. Lost Gravity - Adore this ride, absolutely mad, fantastic elements and transitions with lovely accented airtime here and there.
7. Dwervelwind - just so, so magical. I enjoy a spinning coaster anyway but the theming and IMAscore soundtrack is beautiful.
8. Platform 13 - can't believe we haven't seen this mentioned yet! Incredible theming pre-ride, a fun launch and layout, what's not to like?!
9. Goliath - there was a time when this was in my Top 10 and it's still a really great ride that packs a punch with a butt-load of what I like to call 'old-school' airtime.

And a final 10 depending on what we're talking about here...
10a. Vliegende Hollander - if we're going 'ride experience' then it's VH all the way, one of the most atmospheric and immersive rides in the world.
10b. Fenix - if we're going pure coaster, it's Fenix. Even if I don't particularly rate/remember it.
H

Has something happened to the dragon?!

Heth said:
Has something happened to the dragon?!
Click to expand...

She do be dead...last I heard they'd given up on fixing it and it now just kind of...sits there?

Honourable mention to Vliegende Hollander which is one of my top 10 favourite RIDES of all time.....like, in the WORLD! but thought I'd leave it out as I class it more an experience/dark ride!

I've been trying to get to Toverland and revisit Walibi Holland for a few years now but my Wedding then Covid got in the way.

I'm holding out hope of making it this year, but currently Netherlands are not allowing UK visitors in without quarrantine

Out of interest, has anyone got any suggestions for next month’s poll?

I did wonder about doing Australia, as I’d certainly love to do it, but I was only unsure because I don’t know how many CFers have actually been to Australia or live in Australia; have many on here been, or are there many who live in Australia? I only say that because if only a handful of CFers have actually been to Australia, then it’s not the most fair poll to do, as it excludes a large percentage of the site’s membership.

Ditto with a lot of Asia as well; I’d love to do the Asian countries at some stage, but I’m unsure if I could get a large enough sample size of people who’ve been to Asia or live in Asia.

If there’s a decent sample size to work with, however, it’s certainly a suggestion I’ll look into!

I have 15 Australian creds and I've hugged two koalas

(I know I go on about it a bit, but a) it was fab and b) I don't have many obscure creds worth bragging about!!)

Yeah we should def do Japan at least too, CF isn't that basic.

Sorry; I think I underestimated the amount of people on this forum who’ve been to places like Japan and Australia!

Which would you like to see in September; Japan or Australia?

Matt N said:
Sorry; I think I underestimated the amount of people on this forum who’ve been to places like Japan and Australia!

Well, I've been to Australia, but not yet to Japan, so my vote goes for that. But I can't think of that many members that have Australian creds and regularly participate in these polls. Maybe 6 or so altogether?

Matt N said:
Sorry; I think I underestimated the amount of people on this forum who’ve been to places like Japan and Australia!

Japan, so that I can mention that I have ridden Hakugei for the millionth time

I think we could all assume what would at least be in the top 10 Australia coasters given its has only approx 30 to choose from including a wooden mouse and a Mack hyper.

Japan has got over 200, including the non inverting stand-up with an airtime hill that bounces the restraint (and yes Hakugei). You'd have to leave some of the good ones out.

Serena said:
Japan, so that I can mention that I have ridden Hakugei for the millionth time

I love David’s video of you two riding it.

Right then; it's 1st September, and the results of this poll are in! And they're extremely intriguing; the top 10 certainly contained a few surprises, for sure!

If you need a recap on how I calculate these rankings; basically, I take the mean ranking of each ride and divide it by the number of people who included it in order to work out a final score, similar to what the site team does for the overall poll each year.

Overall, 21 CoasterForce members ranked 28 different roller coasters, and the results determine that the site's top 10 Dutch rollercoasters are as follows:
So that's CF's top 10 Dutch coasters, by my reckoning! An interesting list, don't you think? Let's dive a bit deeper into the results!

Firstly, in contrast with any other region I've polled so far, we can ascertain that some of the Netherlands' most revered coasters are made of wood or have some element of wood involved with them; in a first for these polls, the entirety of the Netherlands' top 3 comprises of wooden and hybrid coasters!

Also, there's a very wide range of manufacturers; no manufacturer has more than 2 coasters in the list, with there being 2 GCIs, 2 B&Ms, 2 Vekomas, 1 RMC, 1 Mack, 1 KumbaK and 1 Intamin!

So that's CF's Favourite Dutch Rollercoasters! I hope you enjoyed the poll! Here's the spreadsheet, if you're interested in how I did all of this: 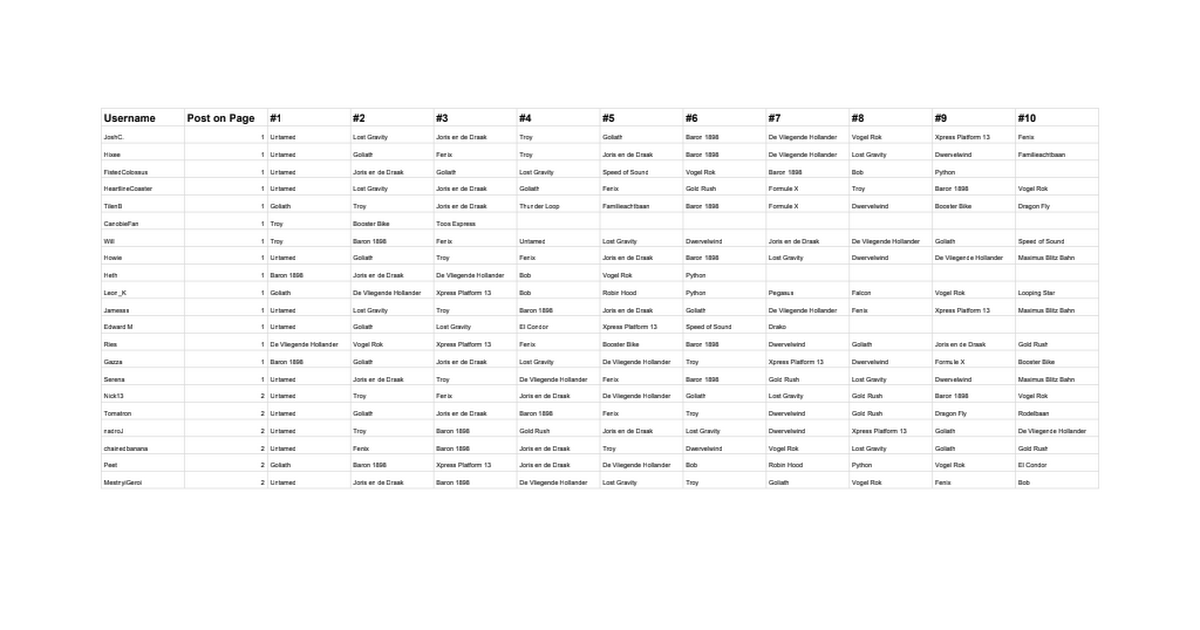 In terms of this month's poll, be on the lookout for CoasterForce's Favourite Japanese Rollercoasters; the topic for that one will appear shortly!
Last edited: Sep 1, 2021

Staff member
Administrator
Moderator
Social Media Team
The age stat is interesting - just goes to show how well the parks in the Netherlands have been doing the last decade.