Such a bizarre line up! Why on earth anyone would decide to put one of those horrendous SBF tower rides in is beyond me let alone the wildwind. Whens CF live turkey happening?!

Have we got any turkish speakers on the forum?
Theres a loads of news articles which seem to say the project has been cancelled.

The State Council decided to cancel the ankapark July 24, 2015 |

Ankara Metropolitan Municipality Atatürk Forest Farm State Council for the project which was built on land Ankapark "stop," he said

The Council of State 14th Department, Atatürk Forest Farm (AOC), which allows the construction ANKAPARK in the land "Atatürk Forest Farm Zoo Renewal Area" of about July 30, 2012 and June 24, 2013 dated two Ministers has canceled the decision of the Council.

Chamber's decisions, the Chamber of Architects, the Chamber of City Planners, Landscape Architects Chamber, Chamber of Environmental Engineers and Agricultural Engineers of the Chamber, the Council of Ministers, 5366 No. Deteriorated Historical and Cultural Assets Preservation by Renovation and Prime Minister for annulment on the grounds that it is contrary to the Law on Yaşatılarak Use , they filed a lawsuit against the Ministry of Environment and Urban Planning Ankara Metropolitan Municipality it reported.

Decisions on about 29 hectares of the existing zoo, "renewal area" of the area is declared to be 217 hectares specified.

This area "of metropolitan open space and metropolitan domestic agricultural land" in the decision noted that the nature, 5366 by Law No. structures can perform the set objectives, the total area of ​​just that remained in the area of ​​the old zoo constituting 13.3 per cent, no building will be renovated on with it 188 hectares in the field of "renewal area" had been declared as given.

The current zoo land, due to the hold worn and face losing their property, renewed protection and to be used yaşatılarak "renewal area" adoption of the resolution referred not seen unlawfulness, but, outside of it, and the structure without land, "wear out, holding face losing its properties , the place to be rebuilt and restored "it was noted that the adoption legally not possible.

Also, on this land, Atatürk Forest Farm Organizations Act supplement Article 1 declared to be a permitted human activities that allow for the physical intervention in dispute resolution law reproducibility does this reasons, "Atatürk Forest Farm Zoo Renewal Area" of the relationship The cancellation of the decision of the Council of Ministers was transferred.

Defendant, overturned and has the right to appeal the decision of the Board.
Click to expand...

This seems like an odd decision with so much on site and already built including an Intamin 10 looper.

Anyone able to shed a little light on this?
S

The SBF Visa Tower Launch and the Interpark Wild Wind are possibly the worst coasters you could probably buy. The only time I had serious backpain after riding a coaster was on a Wild Wind.

If the project in cancelled maybe they can sell the Intamin 10-looper to Vialand in Istanbul and scrap the rest... :wink:

Vialand look like a very nice park. A colleague from work visited and said its a blast. They plan to expand in upcoming years. And they only bought premium rides from Intamin, Zierer and Vekoma.

This news is only about the zoo and not the park itself. It would really be weird if it got cancelled at such a late stage in construction.

When it comes to news in Turkish, it helps to check the German forums a bit. There's bound to be someone who knows Turkish and can translate.

Three more coasters have been 'found' at the park: 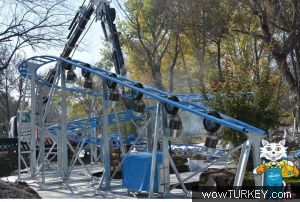 And two more that have been added to rcdb, but I can't find any pictures of. Beijing Shibaolai Space Trip (clone of Flitzer/4 Man bob from Zierer) and what's possibly going to be a Zierer Force 190, once built.

And for some reason the promo flyers they are giving out show photos of Skyrush. Quite obviously a coaster like it isn't getting built, but interesting nevertheless, since they have so much to show that is actually going to be built there.


PS: The sources I've found also mention a Maurer X-Coaster (Skyloop?) and Technical Park Rock'n'Roll. To add the Jet Ski coaster koppen mentioned, this just might complete the coaster selection the park will end up having.
Z

According to the pictures in the brochure they also have Colossus. :/

Zac said:
According to the pictures in the brochure they also have Colossus. :/
Click to expand...

Look on the previous page, they built a clone (well...almost one). Maybe they chose Skyrush as it's the same colour as their 10 looper?

Apparently the bad coaster selection this park will have has gone to even worse. VHCoasters (roomraider) has just posted this on their facebook feed:

Apparently they are now adding Beijing Shibaolai Magic Coaster, which is a knock-off of Maurer Skyloop. Just great! Think that must be a first, a chinese knock-off outside of china/eastern asia!

Nah, there are some built in North America /Central America.
(Mexico, Cuba, Honduras, and such)

^ There is also one in Georgia (country, not state), a few in Russia, one in Czech Republic, one in Dubai, one in Argentina, one in Tanzania and one in Angola.

This is a prime example of concept being impeded by a decreasing budget :lol:

Staff member
Administrator
Moderator
Social Media Team
This place keeps getting more and more ridiculous, with new coasters constantly being added as "under construction". The current count stands at 14 coasters!

The 10-inversion will be, I'm assuming, the newer model, which is excellent. The Intamin family launch should be along the lines of Juvelen/Jet Rescue, so at least 2 of those coasters will be decent amongst that absolute slurry of s**te.
P

Haha, that is an insane amount of coasters.

^ I agree, it's just silly. There are also footers laid in for the possible 15th coaster, which might turn out to be a Zierer ESC. At least that can be speculated from some old blueprints and the layout that could follow those footers. The unknown family coaster is a small ride from Preston&Barbieri (looks similar to some L&T built coasters) and the unknown thrill coaster looks like a Fabbri spinner (lift hill in 2 parts, mouse layout).

Some more updates from the park as yet more coasters go vertical. 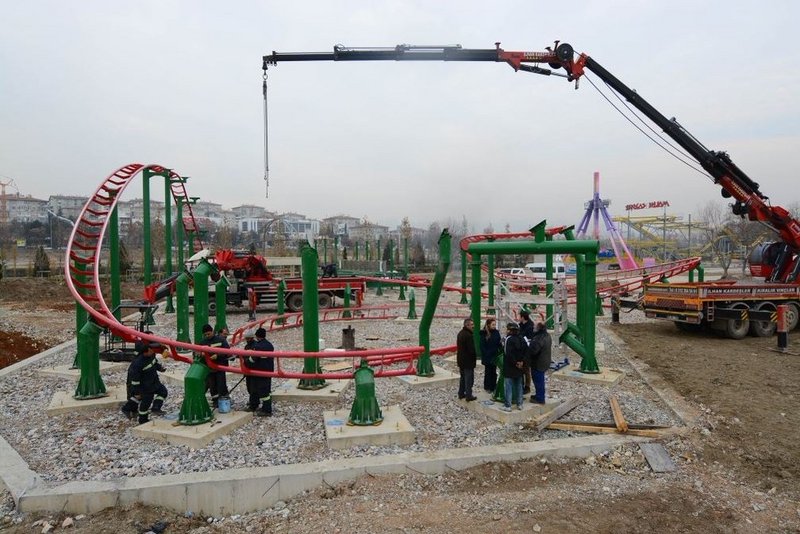 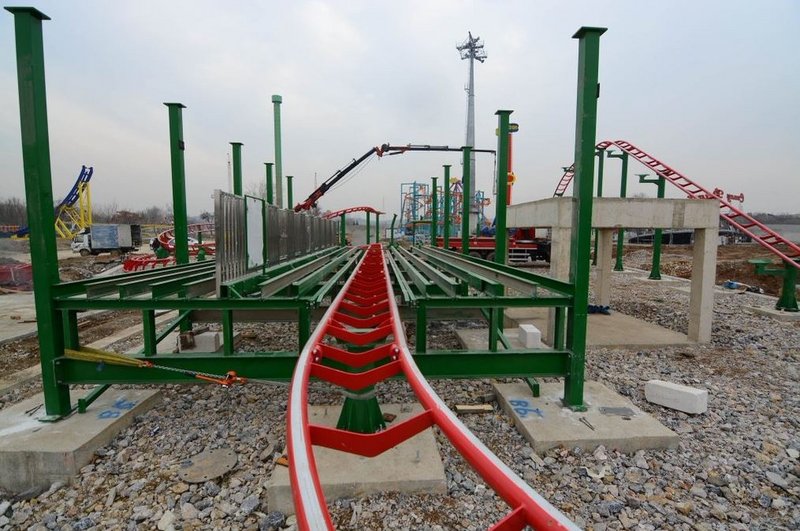 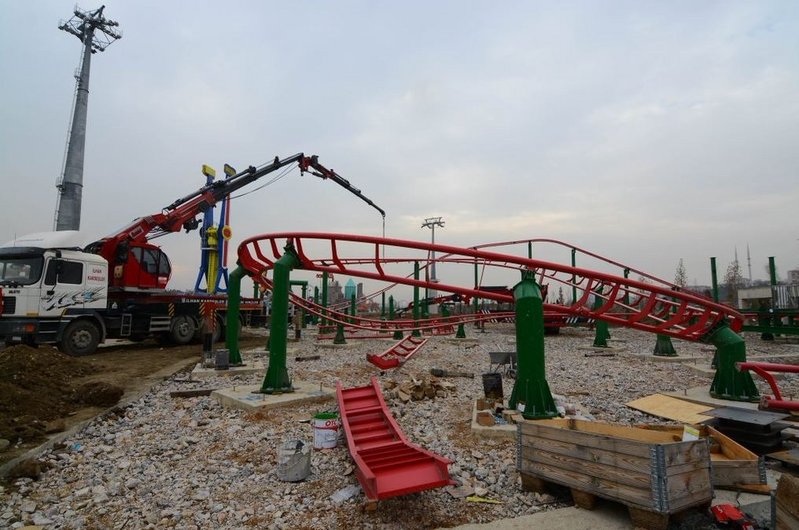 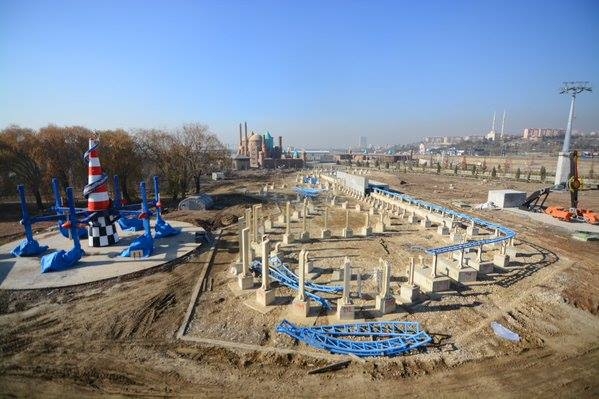 And the BSA built Sky Loop is going up too 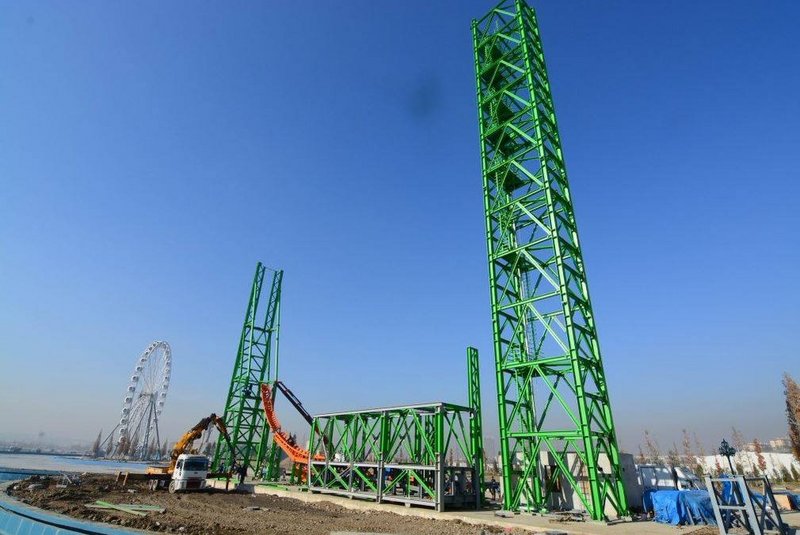 We knew about all these already so it's still 15 coasters.

Is that an Air Race I see?

This park will either be a hit or a miss. But considering it's a majority of clones, I wouldn't think too optimistic. Though for the area, it'll be great.
S

They have some great rides but most are just crap. They are surely only aiming for the numbers. Why would you buy these Chinese knock-offs and poor Italian coasters - for the money they could have built 2 more amazing coasters like from Mack or RMC - but no: They go for massive backpains... =D>

The "Air Race" looks like a Zamperla alright - but could easily be a knock-off from China or Eastern Europe. Guess we have to wait and see till a TR showing us the manufacturers plaque. Or ask Zamperla for confirmation :wink:

Seems like the 'main' part of the park has opened.