The rumor says there will be a Intamin 10-inversion coaster, Jetski coaster and something similar to Divertical.

So far there have only been two Zamperla coasters on site, but track for the 10-inversion coaster have now arrived. Hopefully the two other Intamin rides is also happening!

Seems like the new version of this coaster is a hit for Intamin with already 4 sold ones.

*Edited to correct title format and embed the video. ECG

Wow. Turkey is having a sudden theme park boom, starting with next to none to having three in the space of as many years. It's great to see.

That new divertical-water-mega-ultra-splash-whateveritscalled looks amazing and something I need in my life. It also appears to have one of those tower coaster things that were in RCT3.

Why is the animation on most of those rides so unrealistic?

Still, I'm intrigued. A lot of it just looks randomly plonked and the scale of some of the things in that video must be wrong?

Judging by those construction pics I assume they're aiming for a 2015 opening?

Sent from my C6903 using Tapatalk

According to RCDB, the three coasters for this park (so far at least for 2014, but I think it would be pushing it to hope for any more at this early stage) are an Intamin 10 Inversion, a Zamperla spinner and a a Zamperla Volare.

^ I believe that rcdb only listed the coasters that are already on-site. Others will probably be added when the park will offically announce their rides or when some parts would be spotted on-site. Otherwise, I can't really imagine why they'd bother including the other two Intamins in their promo video.

It would be great if the park could open as "complete" as that video shows, but I don't see it realistically. Outside of a Chinese chain, it's pretty much unheard of for a park to open with six coasters.

I'll be very happy if I'm wrong though.

I think it'll do an Adlab's Imagica and open without some of its attributes being complete. It's not exactly irregular, even Oceak Kingdom did it.

Staff member
Administrator
Moderator
Social Media Team
^ Adlabs and Ocean Kingdom's "later" coasters were literally just weeks behind park opening though, and were announced, as far as I remember, at pretty much the same time as the coasters that opened earlier.

I just can't see a new park opening with six coasters, or even having these extra three appearing within opening year.

I hope it's not the case, but I just don't know that the concept video is particularly accurate, especially when aimed at a Turkish market with little to no coaster experience. Does accuracy matter in that regard?

Again, are they getting two completely different ferris wheels? Why doesn't it show the Zamperla Spinner and Volare (unless I've missed them; I only watched it through once)? If people want to look at the video as an accurate representation of what this park is getting - and I understand why people would like to think that - you can't ignore the aspects that don't suit what you'd like to see.

Again, I hope I'm wrong; this park could be amazing if the video's accurate. Sorry for reserving judgement though.

They sure have been hauling ass with the construction here! 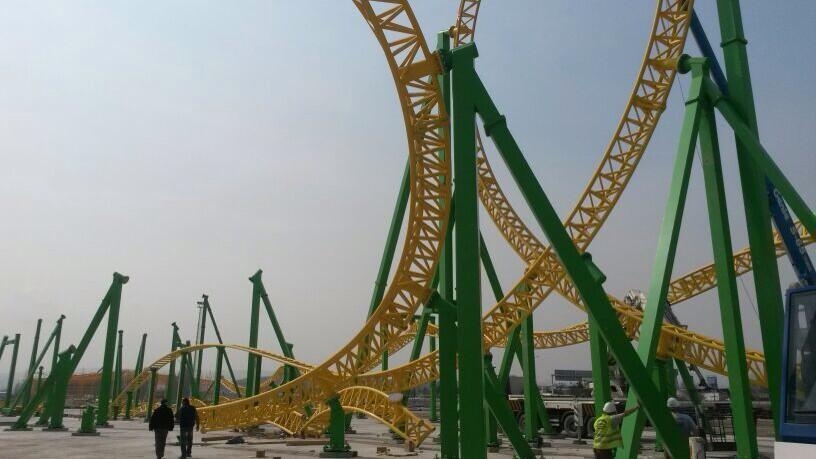 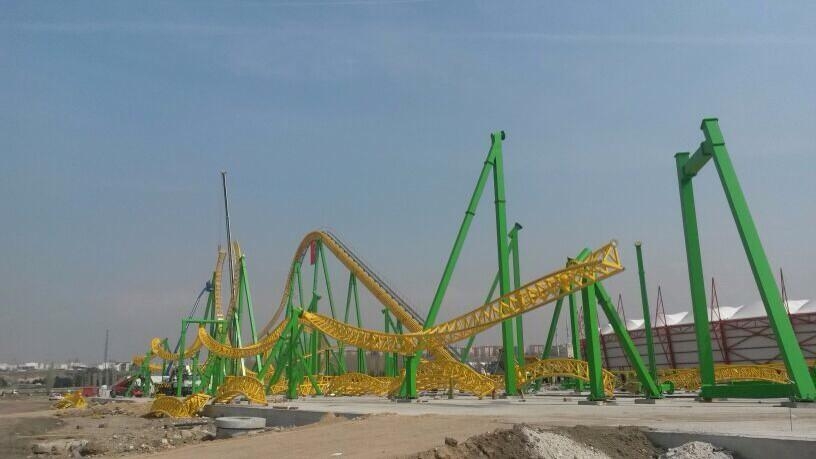 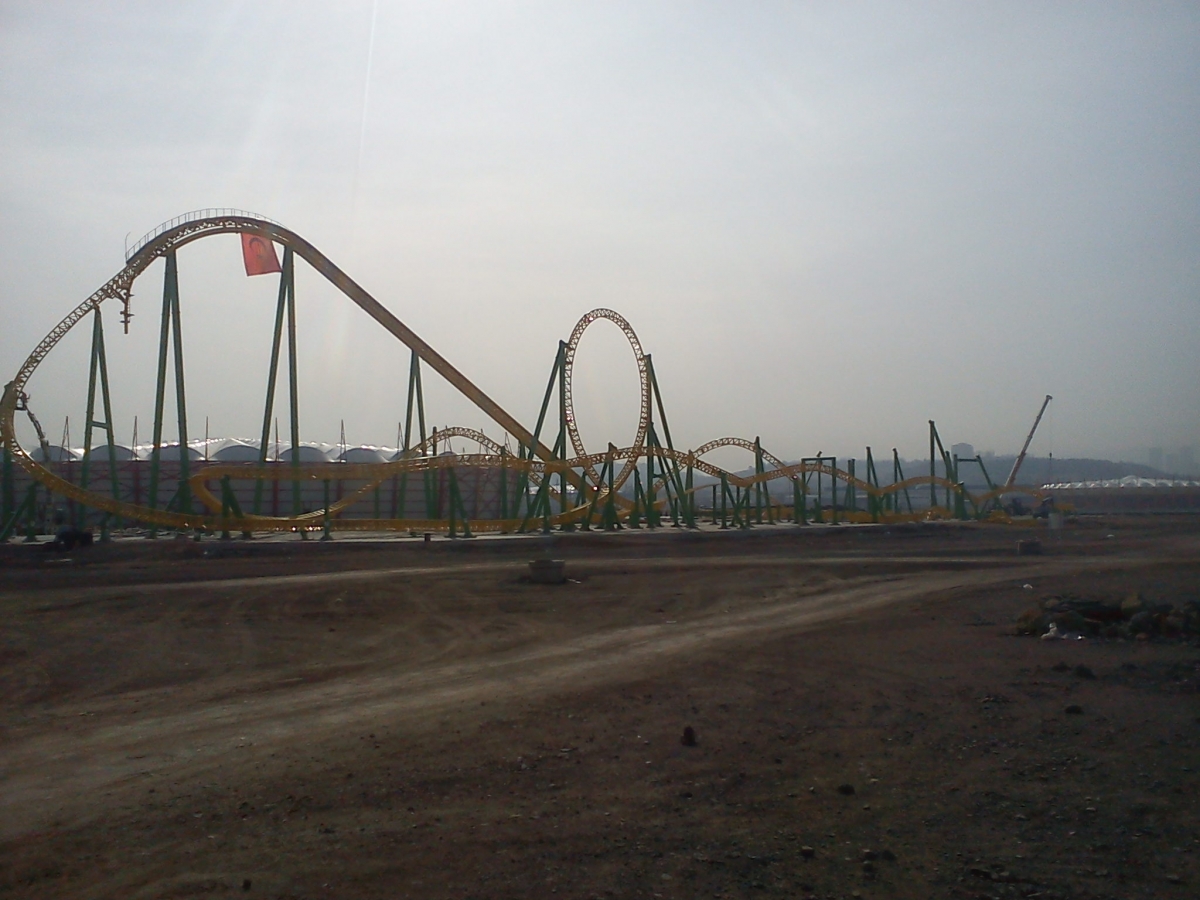 The looper is now done!

If one should believe this park plan, then the jetski coaster should also be built for the opening, but not the Divertical/Giraffica type of ride. That still dosen't men s**t though.

According to the following article (http://emlakkulisi.com/ankara-ankapark- ... cak/366598) the park will open with as many as 14 coasters! That's an insane number, if you ask me.

8 of them have already been erected, with 2 other Intamins (Jetboat coaster, like the one in the Australian Sea World and Water Coaster in the lines of DiVerical) more or less certain to join them. And what a wacky coaster selection that is!

2. Intamin 10 inversion coaster that has already been widely reported

6. Spinning Mouse (rcdb reports it being from Levent Lunapark, other sources say Zamperla)

What an awful lineup of coasters so far (except the Intamin looper which should be great). The last one is like that thing from RCT. It just looks so disgusting </3

The 'Divertical' and Jetboat coaster could be good as well I suppose, but this park has clearly gone for quantity over quality. Still, 14 is a lot of coasters to open with. I think that's the most in Europe?

CookieCoasters said:
What an awful lineup of coasters so far (except the Intamin looper which should be great). The last one is like that thing from RCT. It just looks so disgusting </3

The 'Divertical' and Jetboat coaster could be good as well I suppose, but this park has clearly gone for quantity over quality. Still, 14 is a lot of coasters to open with. I think that's the most in Europe?
Click to expand...

Yeah, I can only think of 3 parks in the world that has more.

CookieCoasters said:
What an awful lineup of coasters so far (except the Intamin looper which should be great). The last one is like that thing from RCT. It just looks so disgusting </3

The 'Divertical' and Jetboat coaster could be good as well I suppose, but this park has clearly gone for quantity over quality. Still, 14 is a lot of coasters to open with. I think that's the most in Europe?
Click to expand...

Yeah, I can only think of 3 parks in the world that has more.
Click to expand...

RCDB confirms this - it'd be tied with Carowinds, Kings Dominion and Kings Island. Europa Park would be the next closest European park, with 12.
http://rcdb.com/r.htm?ot=3&nm=na&ar=316 ... &order=-29

It's actually quite impressive that they're opening with so many, but then again from what they've got so far it's only really the Intamin that looks any good.
P

That is an insane number of coasters to open with. Its like they chose to build all of the cheapest ones they could find though.

12 coasters is insane! But as said before, a terrible line up. It reminds me of Canada's Wonderland(or SFMM). Lots of creds, but most of them are terrible.

^ Are you seriously comparing CW (or even SFMM?!?) with this? The only 'cheaper' rides at CW are the Volare and that Mack Mouse, while this park is filled with cheap rides, which are more or less usually even of traveling nature (apart from the 3 Intamins). I won't even start on SFMM, who has more B&M coasters than any other park in the world. Sure, not all the coasters are world class, but at which park that has more than 10 coasters are?

And one more thing people, Ankara theoretically isn't in Europe, since it is located in the Asian part of the country.

^I was referring to the quality of the ride experience(SLC, Arrow LoopScrew, Boomerang, Volare, etc), not cheapness.

Also, Great Adventure has the most B&Ms at 5, versus the 4 at SFMM. Goliath is Giovanola.
B

Social Media Team
This place is ridiculous, I love it!

I love how they could have just got a few like, decent, coasters for the money, but they were like, nah, fill it up with **** so we have loads of creds.