Sorry, but most coasters do this, same as buildings, they've got to have a little "Give" in them, and be slightly flexible, otherwise they'd just tear themselves up. I can't be arced to put it into "proper" terminology, so that's the best that you're going to get.

Yes actually I did, but since the only statement you made that had any relevance to the question was "The middle section won't wobble because it will be supported by both pieces of track, which are supported, on either end" and the other 5 and a half sentences were referring to how you would build the coaster, it appeared that you had missed the point.

What the hell are you talking about! It is the weight and pressure from the train that causes the track to move or 'wobble' when the train runs over it, therefore in an instance where the angle of descent is steeper (especially approaching vertical) of course there will be less pressure on the track since gravity is pulling the train towards the ground and not into the track, until the drop bottoms out.
Of course the footers and supports hold the track in position, but the question here was about the track movement between two supports, in these sections it is down to the track to hold its position, thus B&M having the box spine for structural integrity.

I'm sure many of the points I have made here will strike you as obvious but since you seem to assume that I don't have any common sense or basic knowledge in Physics it seems fitting to treat you with the same amount of respect.

If you want to discuss it further you can PM me so that we don't take up any more space on the thread.
B

Social Media Team
Alright ladies, plug the flow up and move on.

Just to remind everyone what this topic is about.

UC, genuine question here.
I didn't understand because pretty much all B&M Hyper's have another support in the middle of the drop and they don't wobble at all (or at least in a noticeable manner)
Diamondback is the only B&M I've noticed do this.
I completely understand the idea of the arc being built ....
and I understand that its normal Diamondback's track to wobble like that, because there is no support in the middle of the drop. But most of the time, B&M's don't do that.
In Diamondback's case, the reason there isn't a support under the middle section of the drop, is because there is a pathway right underneath it.
In Shambhala's case, there is another roller coaster underneath it.
While I know its normal if the track isn't completely supported like that for it to wobble, I still think it looks a little creepy and was just wondering if we could assume Shambhala to do the same thing. You can only notice it when you look closely or at the bottom of the drop, really.
And that video of Rattler .... my goodness it must have been an extremely rainy day hahaha. It looked like jelly!

The reason I had mentioned the angle of descent is that on a steeper track angle there would be less force exerted from the train onto the track, and therefore obviously less to be transferred onto the supports and footers. The original comment was regarding the middle (steepest) section wobbling as the train travels down it. I still believe this would be minimal, the wobbling seems to be caused as the train travels along the curves at the top of the lift hill and at the bottom of the drop, when the full weight of the train is forced onto the track making the entire structure move together, thus in the steepest section when the forces applied are minimal, so too would be the wobbling effect?

I'm not referring here in any way to the 'wobbling' effect, but i'm not understanding why the angle doesn't affect the force on the track at all. I understand that the weight of the train doesn't change, but what i'm trying to say is, on a vertical drop, the vertical track doesn't hold the full weight of the train, it simply needs to hold the wheels in a straight line so the train doesn't tip over, the train itself is practically in freefall, which is why I believe that in this scenario there is less force exerted onto the track, thus why companys like gertslauer use birail track even on their beyond vertical drops, because the forces exerted on the track at that stage are not strong enough to require tri track even though the train is travelling at speed.

On a steep but non vertical drop, there would surely be more force absorbed by the track and supports, because the track angle prevents the freefall scenario and actually starts taking the weight of the train?

Ben said:
Alright ladies, plug the flow up and move on.

Just to remind everyone what this topic is about.

It's such a shame when construction topics reach that point where everyone all-of-a-sudden becomes an expert in mechanics, dynamics and statics.

To all the people arguing about other members' understanding of physics: please let us know exactly what your level of education in these topics are. Being an MSc in Mechanical Engineering, it really makes me angry that y'all argue about facts which are (mostly!) all wrong.

I'm not going to correct anyone here — that's not the purpose of this topic — and I don't want to read about people arguing over who 'knows' the most about physics here either. What I want to hear is news about the construction of Shambhala.

On a side note, how **** sexy is Shambhala's drop going to look! Can't wait for the helix turnaround to start taking shape!

iblamefish said:
On a side note, how **** sexy is Shambhala's drop going to look! Can't wait for the helix turnaround to start taking shape!
Click to expand...

This pretty much comfirms that the area is still going to be called 'China'.

UC said:
^You're not the only engineer around here, buddy.
Click to expand...

Didn't say I was.

Just seemed like a lot of GCSE physics to me. More than happy to be proven wrong

iblamefish said:
On a side note, how **** sexy is Shambhala's drop going to look! Can't wait for the helix turnaround to start taking shape!
Click to expand...

This pretty much comfirms that the area is still going to be called 'China'.

We kinda knew it was going to be called China? Nobody mentioned it changing the area's name...

Also, that picture of the drop is at an angle, so you can't actually determine the drop's descent angle until you're at parallel to the drop!

Here is the link to a video uploaded by PortAventura on their official Facebook page.

Great shots and it sumps pages and pages of construction up in one minute!

Shows some shots from inside the park. That's what we want to see <3 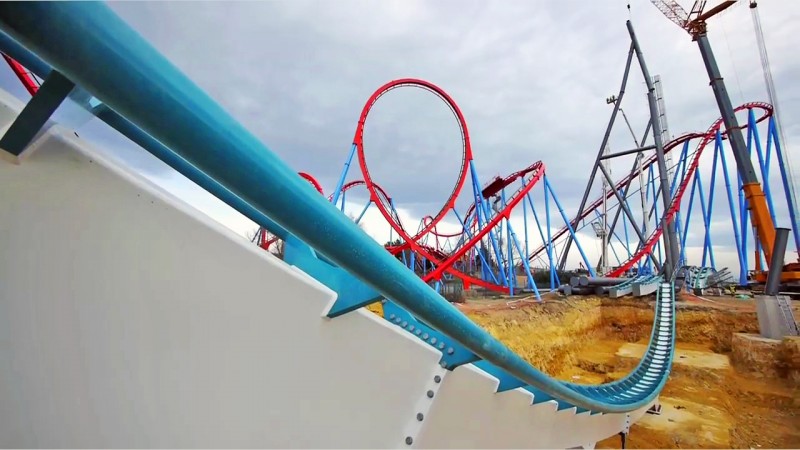 Bottom of the drop. Close up.

The changing skyline of China. :angel:

To whoever questioned how good the skyline of that area would look; it'll be immense.

Smithy said:
To whoever questioned how good the skyline of that area would look; it'll be immense.
Click to expand...

Although blurry, here's a good surprise: