Antinos said:
Two magnetic trim brakes are clearly seen in that footage. Correct me if I'm wrong, but I think the magnetic brakes are fixed and always trim. Despite that, this still looks to be the fastest paced B&M hyper yet.
Click to expand...

Antinos said:
Two magnetic trim brakes are clearly seen in that footage. Correct me if I'm wrong, but I think the magnetic brakes are fixed and always trim. Despite that, this still looks to be the fastest paced B&M hyper yet.
Click to expand...

They do not. The lower magnetic plates are able to move, disabling the Eddy currents and therefore the braking effect. The trims are always turned off in early testing.


You can hear the brakes resetting as the magnets return to their normal, braking position using hydraulics (kind of like on Intamin launch coasters but flipped around).
Last edited: May 9, 2020

Aaron Smith said:
Would you feel the trim of a magnetic break like you do from a friction break? I would have to assume a magnetic break trim wouldn't be as noticeable as a friction break. I know Nitro has a trim after the second and third hills. If they've been on I haven't felt them but I could definitely feel the trim on Mako.
Click to expand...


CrashCoaster said:
They do not. The lower magnetic plates are able to move, disabling the Eddie currents and therefore the braking effect. The trims are always turned off in early testing.
Click to expand...

For education's sake - it's Eddy. But close enough.

I've never seen that video before, how interesting. They do make one hell of a racket! How curious.

Hixee said:
For education's sake - it's Eddy. But close enough.
Click to expand...

Eh I was close enough.

Staff member
Administrator
Moderator
One thing that strikes me as fairly odd about this coaster, and I've taken fairly long to notice it: As far as I know, Candymonium makes Hersheypark the first park with two conventional Hypers, but I thought it was warranted because of the size difference between it and Skyrush. I mean, several parks have a Hyper and a Giga already, and in this case one might not be a Giga but a little bit smaller, enough to justify having two-

... wait a second, Candymonium is only three meters taller than Skyrush? And goes 2.5 kph faster? Granted, it is 300 m longer too, but it still feels pretty identical in size and scope to Skyrush. Sure, the ride experience probably differs quite a bit, but still ... it's as if two different manufacturers were contracted to design the coaster using the same specs.

Hmm, come to think of it, that could have been a neat origin story for Candymonium:
Herhseypark Boss: "So, have you sent out the design tender for our new coaster?"
Intern: "Yes, sir! I found the file on the shelf on the left, made copies, and sent it to all the usual manufacturers. I think you had got the date wrong, however. It said "project 2012" on it.
Boss: "You dolt! It was supposed to be the shelf on the right! The left shelf is our archive! You've mailed out the old design tender documents for Skyrush! And there's no time to make a correction either. Oh well, we'll have to shelf the multi-launch looper project for 2020. It'll be nice to have a spare Skyrush in case the first one breaks down, I suppose."

Hershey park also has Wildcat, Lightning Racers, and Comet which are all wooden coasters and so are the same thing.


You're thinking with an enthusiast head, not a GP head. Nobody in the general public are going to look at Skyrush and Candy and say "Those coasters are almost exactly the same height and speed!! They are the same!!!!!" For one thing, Skyrush may have the tall lift, but the rest of the ride is very low to the ground, concentrating on quick turns and extreme airtime. Candy is a huge coaster, far bigger and taller (the layout as a whole has a lot more 'tall sections') that concentrates on long sweeping weightlessness.

Also, I could have sworn that I heard that Skyrush was originally intended to be a ride with a wider appeal, and it was not intended to be anywhere near as intense as it turned out; it was only due to some mistakes in design that the ride turned out like it did. I seem to remember reading a press release where Hersheypark wanted to emphasise Skyrush’s “fun for the whole family” appeal, and the emphasis on the choice between winged seats and standard seats to make it appeal to younger riders and those who don’t want a really scary ride. I don’t know about you, but to me, that doesn’t sound like Hersheypark intended it to be arguably one of the most intense airtime machines ever built.

As a result of its extreme intensity, while enthusiasts tend to love it, I often hear from Hersheypark locals and other people who’ve been that Skyrush rarely has a queue because non-enthusiasts are absolutely terrified of it. The thing to remember here is that theme parks appeal to a far, far wider demographic than just enthusiasts, and if one of your rides only really appeals to enthusiasts (and not even all enthusiasts, at that), but has the vast majority of your visitors so terrified of it that they don’t want to ride it, then that is a problem. As John Wardley said, theme park designers don’t want to scare people on their rides. They want to entertain as many people as possible. Even though Skyrush entertains the enthusiasts, the majority of their guests are seemingly too scared of it to want to ride.

In terms of how this relates to Candymonium, I think Hersheypark could have wanted it in order to offer a hyper that’s more accessible to a wider demographic than Skyrush. While B&M hypers are still thrilling enough to make most enthusiasts like them, they’re also not so intense that they put off the less seasoned coaster rider in the way that Skyrush might. So my point is; while many enthusiasts may see this as a pointless addition that will just pale in comparison to Skyrush, I think it should be a really good ride for a wide demographic.

Dare I say it, but I think Candymonium could be a far bigger crowd pleaser than Skyrush if you’re talking about a general demographic.

Plus - Skyrush is yellow, Candymonium is brown - that's all the differentiation you need for most people.

There’s also the fact that Candymonium provides the sustained airtime that Skyrush lacks. B&M hypers can provide amazing hills that have you out of your seat for up to 5 seconds in some cases, and the airtime is still really quite strong!

While Skyrush’s magnitude of negative forces is apparently insane, I get the impression that it’s not sustained for very long, instead being in more abrupt pops of a second or less.

Matt N said:
While Skyrush’s magnitude of negative forces is apparently insane, I get the impression that it’s not sustained for very long, instead being in more abrupt pops of a second or less.
Click to expand...

I'd say Skyrush is actually somewhere in between - that's why it's so nuts. Not only is it a big pop of ejector (think the RMC bunny hops), but the hills are big and it bizarrely IS sustained across most of the hill.

I think the difference will be that Skyrush does fly through it's layout, lots of fast corners, hills, low to the ground, the intense airtime, etc. Candymonium is very, very different in this regard. I think people will notice that as the biggest difference.

Second to the colour, of course. That's going to be the biggest differentiator for most people.

Matt N said:
Dare I say it, but I think Candymonium could be a far bigger crowd pleaser than Skyrush if you’re talking about a general demographic.
Click to expand...

This will likely be the case, especially with Candy being the first ride you see when entering the park. It may even draw some of the peeps away from Skyrush, which would be awesome for me lol. Let Candymonium deal with the crowds while I go marathon Skyrush.

Yeah, Skyrush is a VERY niche ride, and does not ride like a traditional hyper coaster. Recall the photos from early in construction when we realized that the first hill is less than half the height of the lift. The ride experiences couldn't be more night and day, which allows Hersheypark to get away with building two hyper coasters next door to each other.

This whole conversation makes me very sad I was spited by Skyrush after one of the construction vehicles for Candymonium drove into a footer, feels about as bad a spite as you can get ?

I agree that they’ll be viewed completely differently, and with its position at the new entrance I think it’ll really look like the park’s headline coaster. Despite Skyrush’s size it didn’t look as imposing as you’d expect for such a landmark coaster. Though saying that, obviously I didn’t see it running...

Matt N said:
I seem to remember reading a press release where Hersheypark wanted to emphasise Skyrush’s “fun for the whole family” appeal, and the emphasis on the choice between winged seats and standard seats to make it appeal to younger riders and those who don’t want a really scary ride.
Click to expand...

Honestly, I think that above all else was the key mistake. If they'd just chose standard T-bar trains, it'd probably be much more widely praised by the GP, and universally praised by enthusiasts...
Last edited: Jun 27, 2020

Back row POV of candymonium looks like a great hyper to me.

Staff member
Administrator
Moderator
Social Media Team
Is... is that a MASSIVE trim after the turnaround? @CrashCoaster - you always seem to care most about trims, do you know? 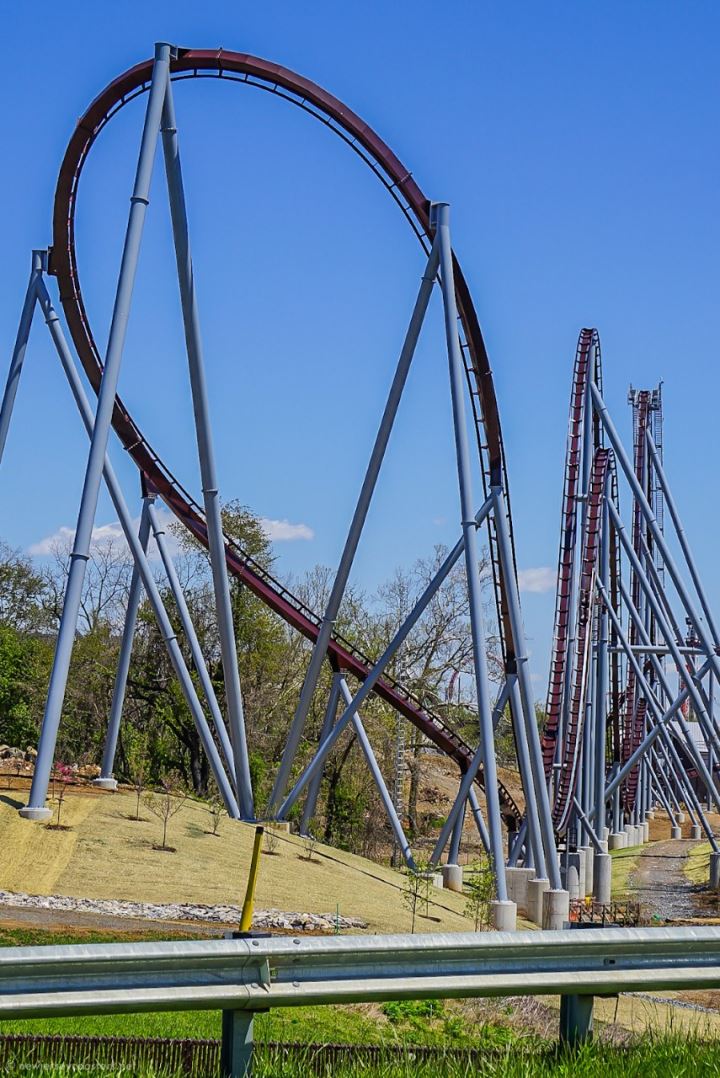 What is this big white thing in this image? Have I just missed this somewhere else in this thread...?