was due to see the levellers last friday, but listened to a couple of their albums instead - They played a triple encore of "this garden" which was great!

Will said:
The fruit of 45 minutes fighting with the website on Friday.
View attachment 7697
Almost 13 years since I last saw them and wasn't sure I ever would again. Am I a bit over-excited? Yes, yes I am.
Click to expand...

*bump*
Typically, this has been rescheduled to June 20th; the day BEFORE the provisional date for the lifting of Covid restrictions. Sigh...

Will said:
*bump*
Typically, this has been rescheduled to June 20th; the day BEFORE the provisional date for the lifting of Covid restrictions. Sigh...
Click to expand...

Yep, 2 MCR gigs and Rammstein a few days before the 21st it's been too long since we last saw MCR together Will......

Ahh I just saw that Rammstein have postponed their next tour to 2022....

....but that has allowed me time to book a hotel in Cardiff and a ticket to the stadium.


A while to wait though.

Just grabbed a ticket to see the 'phonics in the Summer - hoping Neal will sort his life out and do the same...

Music events?! What brave new world is this?

Bumping this thread since I saw my first metal show since the pre-Covid era on Monday. Deicide/Kataklysm/Internal Bleeding/Begat the Nepheleim/2 local bands whose names I didn't catch.

It was a ton of fun. Kataklysm is one of my favorite bands (even their stupid stuff is like pizza, it's pretty good even when it's bad). I walked away with a day's worth of tinnitus and bruises all over my body from the mosh pit. Still have a ton of bruises on my chest and biceps as of today.

I'm very glad the death metal shows are back - I'm strongly considering seeing Goatwhore this Sunday, and I think Black Dahlia Murder is going to be in town 2 weeks from now

Had an apt gig advert yesterday!

Being in a crowd that large was surreal enough but the performance after an 18 month break; even more so. 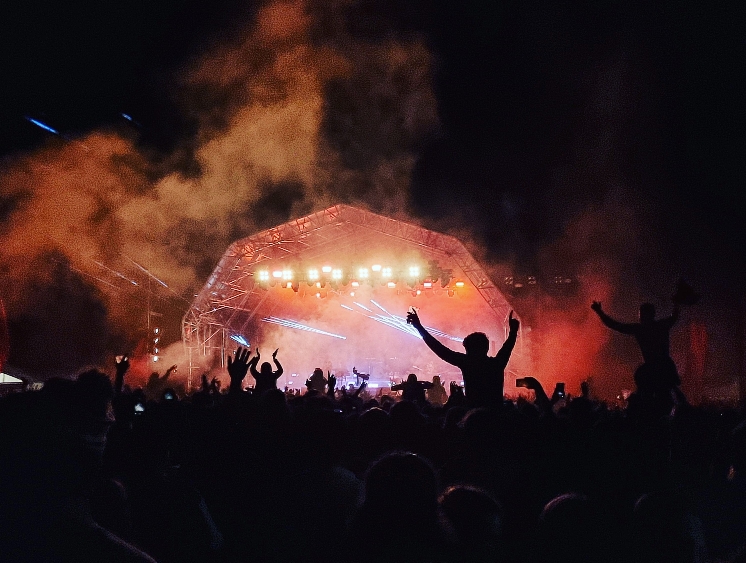 I went to a proper concert tonight!

Well, none of that proper modern music, Britpop 90s throwback stuff - double-header with Sleeper then The Bluetones (both playing their debut albums in full). 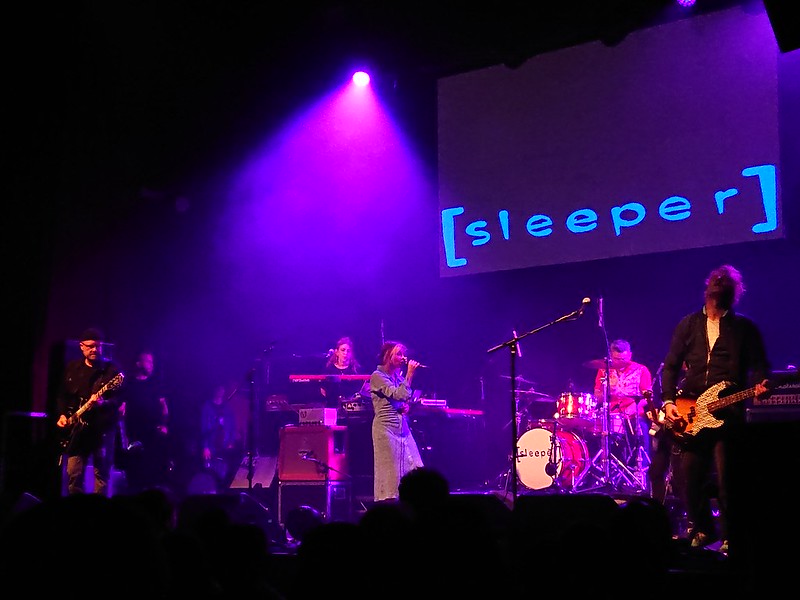 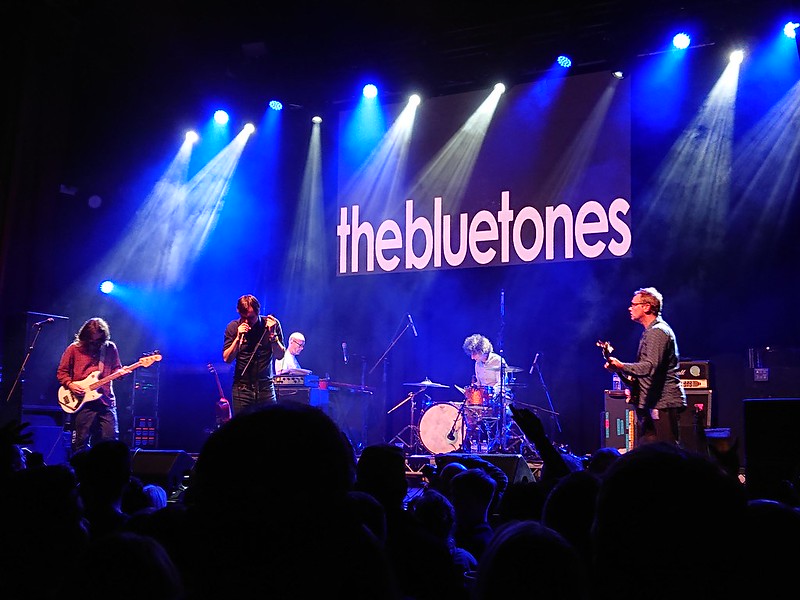 Had seen The Bluetones a few years ago and liked that, never really listened to much Sleeper (apart from in the last week to catchup) but they were very good too, took a little while for them to warm up I think (they were on first) but by the end of their set they were right on form. Bluetones had a few technical issues with guitars and lights at the start of their set, but recovered - very good. That Mark Morriss is a witty chap too.

Covid wise ; once inside the venue* you'd never had known anything was up. Lets hope all that vaccine business pays off then.

(*Indoors, medium sized venue, not packed full (seen it proper packed in the past) but still pretty busy) 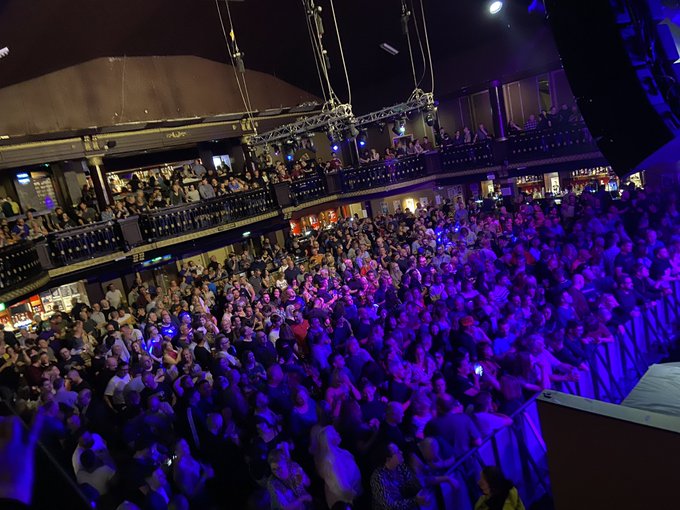 Not technically a gig or tour but I'm going to this thing in September and I can't wait!

^
I think my recommendation takes the credit for that

I'm excited to hear there's a sequel to the Silver Scream album if it's anywhere close to the first [And a track called F.L.Y to my amusement]
Slightly annoying that they'd go through the hassle of coming to the UK and then proceeding not to play any proper gigs though.

I still haven't got back to one - ended up selling my 'phonics ticket as the idea of going to Scarborough and back in a day was just too much. With both my favourite bands releasing albums in the next two months, I'm kind of hoping some dates get announced
Last edited: Aug 17, 2021

Will said:
^
I think my recommendation takes the credit for that

I'm excited to hear there's a sequel to the Silver Scream album if it's anywhere close to the first [And a track called F.L.Y to my amusement]
Slightly annoying that they'd go through the hassle of coming to the UK and then proceeding not to play any proper gigs though.

I still haven't got back to one - ended up selling my 'phonics ticket as the idea of going to Scarborough and back in a day was just too much. With both my favourite bands releasing albums in the next two months, I'm kind of hoping some dates get announced
Click to expand...

Yh I would say so haha!

And they're playing a few festivals here I think? The thing I've got tickets to says 'special guests' will appear and they're in the UK around that time so I'm hoping maybe we get a sneaky set or at least a song or two? Who knows.

Will said:
Slightly annoying that they'd go through the hassle of coming to the UK and then proceeding not to play any proper gigs though.
Click to expand...

This was exactly my thoughts, there's got to be more to it.
Hip To Be Scared feels like a promising start though!

So the Ice Nine Kills thing was a bit...weird?

Essentially it was £18, and the description said something about music video premier, special guests, food & drink, exclusive merch. So...not too descriptive but sounded fun and price tag some indication that it should've been something of an event? It started at 9.30PM, we got in about 9.45PM, and there were a few photo ops (accompanied by some of the worst 'scare actors' I've ever seen bless them) then a bar selling themed cocktails and a merch stand (that only took cash...why it's 2021). We sat down and there was a live feed from the lead singer basically saying 'sorry I couldn't be there, I hope you enjoy the thing'.

The thing was essentially the three music videos for the new album, one of which was indeed a premier (for Rainy Day, based on Resident Evil, very good I'd recommend checking it out). This was then intercut with some scenes tying it together in a bit more of a narrative. And that was it. At 10.30PM the lights came on and it was over. £18 for 45 minutes of...something I guess?

My theory is there's been COVID shenanigans as the band were supposed to play Slam Dunk festival last weekend and ended up dropping out. I feel like they did intend to show up, the lead singer at least anyway, but that didn't quite happen. It was all very weird.

That said, I had a fun time dressing up spooky and getting into the spirit of the season and the venue was stunning, so swings and roundabouts.

^
Shame that ending up being a bit ''eh?' - given they played a festival in Ohio this weekend, it's almost certainly down to travel restrictions and probably a bit soon for US artists to commit to anything here

Not big on Rainy Day - I'd say that compares to some of the weaker tracks on the first Silver Scream. Still excited to have the rest of the album for long drives to scare attractions in the coming weeks

In happy news, I've secured a rather expensive ticket to see Dream Theater in April - will also be my first time in Newcastle upon Tyne!

Enter Shikari tonight at Ally Pally was super lively. I've seen them a few times in the past and always left unfulfilled due to weird setlist choices but tonight they got it so spot on. Towards the end when they switched from Mothership into Solidarity my jaw was on the floor. It was so good to hear them play the heavier more trance focused stuff.

Had a mosh and a jump around in the pits for the first half then got exhausted and slinked away to the side to recover. Felt amazing blowing off steam at a gig after 2 years of absence. I imagine I was far from the only CF-er there tonight, what did everyone else think?
P

Last month I went to see the amazing Daði Freyr in London. This show was postponed from April 2020, part of me is glad it was because he's written even more great tunes since and it made for an incredible night. It all felt like one big party, although there seemed to be a LOT of people talking at the back/bars which was kinda rude.

Then last weekend I went to Brixton Academy to see Alestorm! This was my second time seeing them and it was just as much silly fun as last time, just in a bigger venue. I felt like the doors opened pretty late at 7pm and it felt like the first band started playing as everyone was only just making their way in, felt a bit bad for them. The queue for merchandise was insane but some people introduced some inflatable balls into the mix and it made time fly by. It was quite cool seeing Gloryhammer live, I've only listened to them on occasion so I'm not overly familiar with all of their tracks but they were good and the group next to me were having the best time of their lives. There was quite an epic singalong to Bohemian Rhapsody just before Alestorm came out which was really awesome. Their set was perfect and they had quite a lot of friends come out to join them for certain songs which was fun.

I've impulsively booked to see The Rasmus in October.

Yes, they have more than one song, yes, they still exist. I went to see them with Tarin in 2019 (they were one of the first 'heavier' bands either of us discovered) and they were a lot better than I expected, though admittedly, I'm not a huge fan of their most recent album - or their first three for that matter...
Last edited: Dec 30, 2021

I HATE the Dear Happy album with a passion, but the year her first album came out, she reminded me that life was worth living.

Don't think I'll be hanging around outside for a picture and an autograph this time though, I could probably paper a small wall with them.