I don't think so, the park-website says it's two trains:

Not familiar with Toverland so I didn't realize they put a lot of effort into their theming, so seeing photos of this new area looks really impressive. 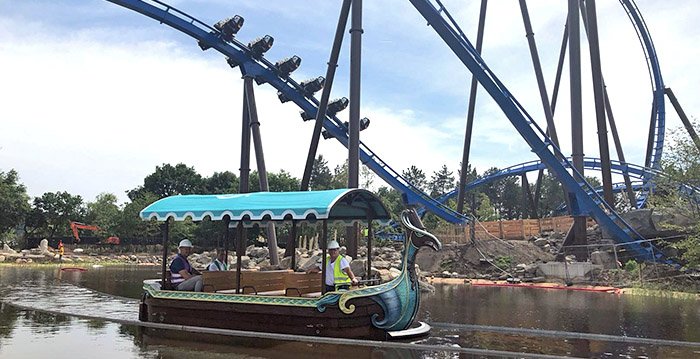 Some more images of Merlin's Quest testing from ToverlandFansite on Facebook.

Notice the member of staff in the water pushing it from behind.

It looks so amazing. Really looking forward to experiencing this area this summer! Toverland is just outstanding.

I've having looked at the park for a month and they've just pulled all of this out of their hat?
Colour me impressed!
Am really happy for Toverland for the expansion and additional attractions, I'm sure they'll keep the competition up and healthy in the NL and surrounding parks. <3

Well it is currently still a construction site. I'm sure it will be fine come opening. And either way you don't get wet on this ride or come into contact with the water.

What Kenny says, plus it could be dye to hide the underwater construction stuff?

It was just filled and it takes some time for all the dirt to settle. Remember how brown the water under Lech Coaster was when it opened? Now it looks normal.

NeoXIII said:
it could be dye to hide the underwater construction stuff?
Click to expand...

I can't believe how quick they've done that.

Plus, the water has sediment in it that will eventually settle on the bottom.

As I've said before, I had fears this project wouldn't be completed fully on time. And I did have fears Merlin's Quest simply wouldn't be ready at all. But they've really blazed through getting that complete, and the theming is coming along incredibly.

Super excited to be doing this in a month's time!
H

This is all looking so lovely! It's great to see a small park get such a solid, well themed addition.

JoshC. said:
As I've said before, I had fears this project wouldn't be completed fully on time. And I did have fears Merlin's Quest simply wouldn't be ready at all. But they've really blazed through getting that complete, and the theming is coming along incredibly.

Super excited to be doing this in a month's time!
Click to expand...

I mean, construction sites are kind of similar to cleaning up a messy house. You're busy all day, and whatever you do just appears to make everything look even worse, but then finally, during the last 20 minutes, everything suddenly seems to make sense. Messy places just look "messy" to the human eye, no matter how far it already has progressed to becoming a tidy place.

Same with this project. The landscaping that had to be done and the entire groundwork required to even make progress that's visible to spectators/outsiders is enormous, and that is also where most delayed openings originate from: lack or improper execution of that very important, but also "invisible" groundwork.

Also factor in the spectacular choice of manufacturers in B&M and Mack. If you want to get things being done and running well, it's not going to get any better.

I wonder what's in the cave?! oooooooooooo.

New small changes in the rest of the park towards the opening of Port Laguna and Avalon:

The Magic Forest has been transformed in recent years into an Austrian section including the bobsleigh track Maximus' Blitz Bahn. "The original English name therefore does not quite cover the load," says a spokeswoman. "That is why the area is called Wunder Wald, completely in style."

The Troy Area also changes name. That part gets the name Ithaka. "Ithaca is the legendary island of Greek mythology", the spokesperson knows. "The name change gives us the opportunity to further expand Troy's story in the future." There is already a horse track in the area called Horses of Ithaca.

EDIT:
Coincidence or not but Troy Area's new name Ithaka, refers to an island which is the home port of Odysseus, who was quite a important character in the myth of Troy.

This name change can be a first step to expand the Troy Area, now Ithaka, with a wish that has been long on their wish list: a Mack Supersplash, called Odysseus.
Last edited: Jun 12, 2018

Phantasiastisch said:
This name change can be a first step to expand the Troy Area, now Ithaka, with a wish that has been long on their wish list: a Mack Supersplash, called Odysseus.
Click to expand...

Looking at how fast they're adding new stuff to the park recently, I'm sure it'll be at the park for next year or 2020 for sure

Phantasiastisch said:
This name change can be a first step to expand the Troy Area, now Ithaka, with a wish that has been long on their wish list: a Mack Supersplash, called Odysseus.
Click to expand...

Sounds like a decent idea. They have a lot of water stuff going on already, including all of their playgrounds. For little kids, it's almost mandatory to bring swimwear, even though they don't even have a pool/waterpark.

I guess they'll now keep expanding every 2 or 3 years. My thoughts about what I expect to happen in the next few years:

2019: Refurbishment Booster Bike (@Fluorineer: Toverland's response makes me thinking that they're actually busy with the future of Booster Bike, behind the scenes, but that they just don't wanna say it yet.)

2023: new area around the second lake and their first hotel (2023 was announced as opening year for a hotel by Caroline Kortooms herself, in an interview a few years ago).

I really don't see an Odysseus ride happen actually. there isn't really a lot of room anymore in the vicinity of Ithaka. Even if they were to remove the rope course they would still not have much room to fit a new path connection in between all the theming, rides and queue for Troy. Also, Scorpios already kinda covers the load when it comes to attractions themed to Odysseus. I mean it technically isn't themed to Odysseus specifically, but that connection comes naturally when you add a boat ride to en area themed to Troy. Although I really like the Troy area I can't see them adding anything major to it anytime soon. I imagine their next big project would be another new themed area with most likely a family attraction. It would probably make sense for this to open in 2021 since it will be the park's 20th anniversary by that point.
You must log in or register to reply here.
Share:
Facebook Twitter Reddit Pinterest Tumblr WhatsApp Email Share Link
Menu
Log in
Register
Top