I love the little worm on Oscar's hat.
The trackless all terrain dark ride looks the coolest thing I've seen so far.

Go on Ian, buy one. You know you want to.

....and because who wouldn't wanna see photos of things that have already been posted! Haha

I thought M&V was finally gonna announce launched wooden coasters. I'm a bit disappointed but also a bit relieved at the same time.

I didn’t bother posting anything from their announcement. For those who didn’t hear, they will be exclusive distributors in the USA for SBF Visa and Fabbri.

Not going to lie, it was a pretty weak show. All the big announcements were in Day 1 (as usual) and the rest of it was nothing new or virtual ****ing reality. It was fun to walk the floor (walked about 25miles in four days) and make connections, see some strange stuff and basically indulge in goonery but, on the whole, it was a bit poo news wise. Although I did see several park owners chatting at different booths and hear a few words of gossip (which I obviously can’t post in public).

ICYMI, here’s my round up: http://coasterforce.com/iaapa-2017-round-up/

Is 40ft really the biggest rapids drop? Doesn't feel like it should be.

Highlight for me has to be the Time Traveller train.
Otherwise I agree, doesnt look like much interesting was going on.

The Steepchase horses look so gooood.
My favourite thing from IAAPA this year though has to be the Virtual Reality flying simulator...just the fan in the face, it's amazing.

Staff member
Administrator
Moderator
Social Media Team
Yeah, the bird simulator was fab. So redic! I stopped in my tracks and exclaimed “what the ****?!” The company behind it is Birdly if anybody wants to research further!

HeartlineCoaster said:
Is 40ft really the biggest rapids drop? Doesn't feel like it should be.
Click to expand...

I know for certain when Phantasialand's River Quest opened it held the title for the tallest drop (for the first drop). Not sure if it still holds that record but the drop is 36 feet tall.

^I feel like Jurassic Park USS should be at least that. It's ridiculously intimidating for a rapids.
Can't find any decent stats though. Just the film wiki saying 'The vehicle is unloaded from the elevator and descends one of two ramps out of the building at a height of 40 feet'.

Got any pics of the RMC booth? - one of my Wildfire pics was used on it. Cool. 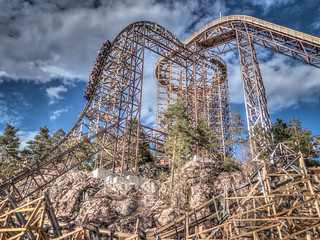 (I have found a TPR pic online of the booth, was in the top-left corner of the display, pretty big)

EDIT : and I think the cover of the RMC brochure at the show had it on too. Super-cool!

EDIT2 : can see it in canobie's tweet (top-right bit)