That could easily open in May, look at how Etnaland was built, they were FAR from complete a mere month to few weeks from opening.

Staff member
Administrator
Another update on Theme Parks Italia with loads of photos. The park is scheduled to open to the public on July 8th.

ECG said:
The park is scheduled to open to the public on July 8th
Click to expand...

No specific opening date as yet been announced, as stated in this article on Le Monde the park will probably open in July. But I would wait for an official announcement on the official channels

Staff member
Administrator
According to theparks.it, the park will be opening with only eight attractions running and is scheduled to open on July 20th, so like Rickwally says - better to wait for an official announcement.
They list seven of the eight attractions as follows:
1)Roller Coaster
2)Multi motion dark ride
3)Super splash
4)Family drop coaster
5)Free fall tower
6)Panoramic flight simulator
7)Immersive tunnel
They go on to claim that due to the park's remote location and lack of public transport, the owners also believe that most of the park’s guests will come from the nearby outlet retail mall and will only spend a few hours in the park after shopping, so they don’t plan on making the park a full day’s experience.
Both Rainbow Magicland and Miragica (near Puglia) also used the same nearby outlet retail mall model and continue to struggle to draw in large numbers of guests, so it will be interesting to see what happens here.

ECG said:
the park will be opening with only eight attractions running and is scheduled to open on July 20th
Click to expand...

Staff member
Administrator
Ride testing and other photos from themeparksitalia along with a poor quality video of Super Splash testing.

Rumours are saying that all but the simulator (Soarin' style) will be opening with the park. The website has been redesigned and it's very horrible to use. http://www.cinecittaworld.it 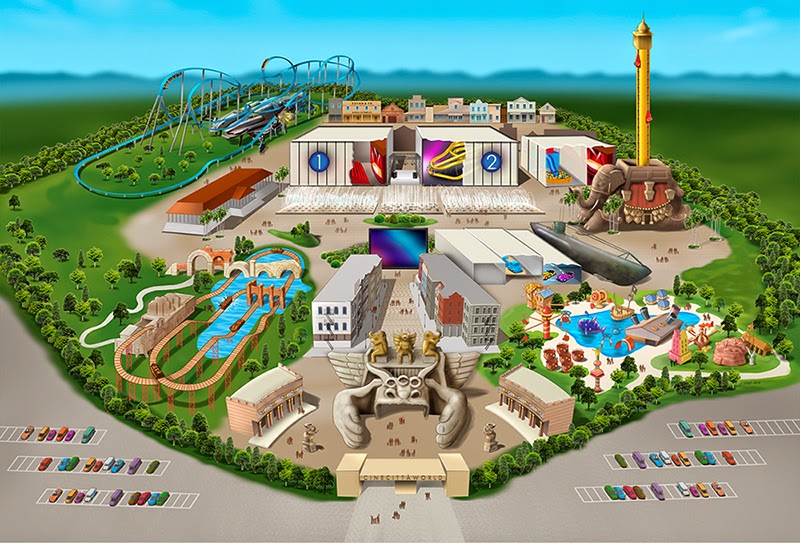 Some posters for attractions/areas and google translated descriptions:

The air is full of notes, singing and dancing. Are you in New York in the '20s. The musicians practice at every street corner. There is a singer with a voice of heaven, that he really wants to live and let live: comes from far away, but here has known true love. He performs in the same room where a group of dancers is trying a number of hi-hat. On the singer has set his sights a gangster: he wants for himself. Will it succeed? Go to the barber: he knows everything, even how to make you go down in history as desired.
Click to expand...

Welcome to Cinecittà World. The giant Moloch, opens her arms to you. It has the appearance of a demon scary because it is made of magic. Challenge the huge mouth, past the screen, hard to swallow. You'll find fantasy, fun, danger and adventure. You'll travel through time, continents, planets. You will become a gladiator, an explorer, a gunslinger. The film will open the door and you'll have access to their secrets. Enter the world of cinema: you will finally be the hero, the protagonist, the director.
Click to expand...

A show will be performed here just as the gates open.

You are in a border village, the railway has not yet arrived and the only law is the voice of the guns. The beautiful saloon would like strangers passing you forget to continue and remain with you forever. Tick ​​the inevitable argument: someone turns the table and do not want to pay. The sheriff rushes, but the opponents are many. Too many to one. Unless ... Discovered in the village at the right time and you can join at the end of the story. You will have an amazing soundtrack music of Ennio Morricone.
Click to expand...

Another 3 or 4 shows will take place in this area as well as a bunch of game stalls and bars.

After more than four millennia, the ship Altair back on planet Earth that humans had abandoned in the late 22nd century. In fact, at the end of the XXII century, due to intensive exploitation and short-sighted, the planet had become sterile. Humanity, reluctantly, he decided to abandon it in order to survive and founded new colonies in space. Now the human race is going back to basics. But come find some surprise: the Earth is a new world and lush, and is inhabited by a new sentient race. Who are these beings? They come from outer space or have evolved independently? But above all, they are now the aliens, or are we?
Click to expand...

This is where the big 10-inversion Intamin is. Another show will also take place in this area.

Against the backdrop of the famous naval battle of Actium, and the love between Antony and Cleopatra, is celebrated epic story of Marcus Octavius, commander of the notorious Legion II. Recalled by Antonio to fight at his side against Octavian, during the final battle will find himself alone against the enemy betrayed by his own allies. The blood of Rome dyed the water of the Mediterranean in fratricidal battle that marked the birth of an empire.
Click to expand...

This is where you'll find the supersplash.

The Second World War has been the scene of numerous battles for land, air and sea. But the most epic battles were fought in the darkness of the abyss, where some submarines were known for legendary exploits. Among these, the crew of the Eagle IV, code-named the Royal Ship Submarine Torelli, survived throughout the war, serving in three different Marine but always standing for courage and loyalty to the enemy. We enter the beautiful eagle IV and discover life to the "below" the sea, we will be protagonists of a battle that we will become legend.
Click to expand...

An attraction which I assume will be the same as what they have up at the other Italian movie park.

In 1958, the large theater was closed after the shooting of a film about the Divine Comedy, a film that was never finished turning. During production, many cast members have disappeared into thin air and no one ever knew anything about their fate. But this story does not scare dismal Leto certainly the commissioner in charge of the case reopened and re-enter the theater to make appropriate inquiries ... Are you brave enough to accompany him inside the set cursed? Be prepared to face an incredible journey ... to the last circle of hell!
Click to expand...

Darkmare is the Intamin drop coaster. It's all indoors and there are rumours of lots of screens and effects (potential to be awesome imo).

"Who will go up on top of the big elephant, you can steal the sapphires of heaven and return to earth with fame and fortune." This is the enigmatic phrase shown on an old map that has come from India to Professor Lewis. 's Venture we, together with the young English doctor, in the mysterious jungle through the doors of the Erawan Shrine, the legendary elephant. On his back we will find the fabulous treasure ... but a deadly trap has been built on it and the drop will be much more risky than the climb!
Click to expand...

Want to know what goes on behind the scenes of a set? Get on the tram that takes you in the warehouses of Cinecittà, where they are stored costumes, dummies and the remains of scenografie.Ti will guide a keeper. The glories of the past are piled next to each other. A pharaoh is courting a match girl, driving the chariot is a robot, the megaphone of Fellini is in the hands of an ape. It's just ... You see? Is there anyone that moves: who is it? Something comes to life on the other side. What happens? Keep Calm, please!
Click to expand...

This is the tram ride with the 360 degree screens, similar to Kong 360 at Universal Hollywood and what Movie Park Germany are just about to open.

This is for the kids area with a bunch of flat rides and that. Is it just me or is the bottom bit of the poster rather creepy?

The film is made of special effects. Have you ever hoped to be able to get into a pinball machine and turn endlessly like a ball? Now, you can. We were able to make a real tiny Formula One track and we lined up on the start of the toy car. It will be the most spectacular race has ever seen. Put on your helmet and fasten your seat belt. Watch out for lane changes of the opponent, curves, tunnels, and light poles ... Come on, push on the accelerator, you have to reach the finish line before the others!
Click to expand...

Never heard about this one, then it got interesting...


Some Italian goon said:
In this set turns a science fiction movie about car racing in the near future. You will find yourself in a real circuit for a competition without rules. Buckle up and get ready to enjoy. themed path with lights and special effects aboard cars themed retro / futuristic electric propulsion dedicated to all the children but also to the pilots larger.
Click to expand...

So you'll actually be riding in go karts while shizz is going on all around you! Sounds cool.


That should be enough info for this second! Apparently VIPs are currently visiting the park over the next week so I assume we'll start to hear more about it soon.