It seems like there is still missing a support

Jackson said:
I can't see the images. Can you link them a different way?
Click to expand...

It's useless, I'm Bumblebrick on Instagram. I took the photos leaving the park.
T

For those interested, here are the pictures in high definition.
Link: https://flic.kr/s/aHskQtGdz4
B

Be_coaster said:
The drawings of how the completed track should look like were nice but I guess they can be tossed in the bin as these new supports are discovered
Click to expand...

like always with phantasialand , they always are comming out of nowhere with new things
S

Personally, I think a walkway will go over the the entre of inversion#1 to Launch#1. Would make a lot of sense.

Tobi posted this image on PhantaFriends of track going on the 1st overbank.

And according to Tobi's estimates/calculations there is currently around 1167m of track; and therefore F.L.Y. is now the longest Flying Coaster in the world. He thinks there is about 70m to 80m left to be installed.
T

I have the feeling that after the first launch, there will be a reversal. But on the other hand, there is one right after ... And two inversions almost in the same place, it seems a lot.
M

I'm wondering how there still can be discussions about the rest of the track. The supports make it so obvious but for those who still didn't figure it out:

And just for a reminder the whole layout:

How will the connection in the red circle be used then? If you follow the track, Just before the roll, there is another support that is currently unused...

Those supports can't be completed yet because the concrete isn't poured.

Do we have any idea of the speed this might launch to?

Given they have a balls-to-the-wall, very intense launcher over a couple of walls in Klugheim, I’m expecting something not too much faster than Air. I don’t think this is a bad thing at all given the seating position, the almost-constant turning, and the expected close interaction of scenery, paths and indeed other track which will all act to heighten the sense of speed. Saying that, I wouldn’t rule out PHL just dialling up the speed because they’re absolute mavericks, but curious if we know anything on that yet.

Thanks all for the great updates so far!

The mysterious door 1...Curious to see how many doors will follow.

Be_coaster said:
View attachment 4938 How will the connection in the red circle be used then? If you follow the track, Just before the roll, there is another support that is currently unused...
Click to expand...

More track went in today; although due to the incomplete support previously mentioned, the track on the right is currently hovering without a support connected.


Phantasiastisch said:
The mysterious door 1...Curious to see how many doors will follow.

On PhantaFriends user PHLMarcus has a good theory that "Gate 1" could be for a Zeppelin depot. Perhaps the theory/wish of a fake Zeppelin over Rookburgh as a theming piece like in the teaser artwork might happen after all. Presumably prefabricated gates or perhaps even half a zeppelin (as if its parked or coming out of the building) will go on the uncovered wall section to the left of the Tor 1 writing.

Really excited for this. If I'm completely honest, the wall theming that can be seen in the photos above hasn't got my juices flowing just yet. It looks a bit, odd? Unfinished? Messy? Just my opinion from seeing it in photos and a little in person. I'm sure they'll pull it all off though.

On the other hand, since visiting the park last week, I've gone from hating the new Wuze wall to loving it. It really looks so much brighter and prettier in person, so I'm definitely happy with how that side looks!

The circular platform that was created with Wuze Wall, a number of features of which led to speculation of a new flat ride, is seemingly not going to be used for anything like that just yet. Today these new signs teasing/advertising Rookburgh have been set up. However since the platform is not yet accessible this is currently the closest view of them. The left hand one appears to be about Hotel Charles Lindbergh, the middle is some new artwork and the right is about F.L.Y. itself. 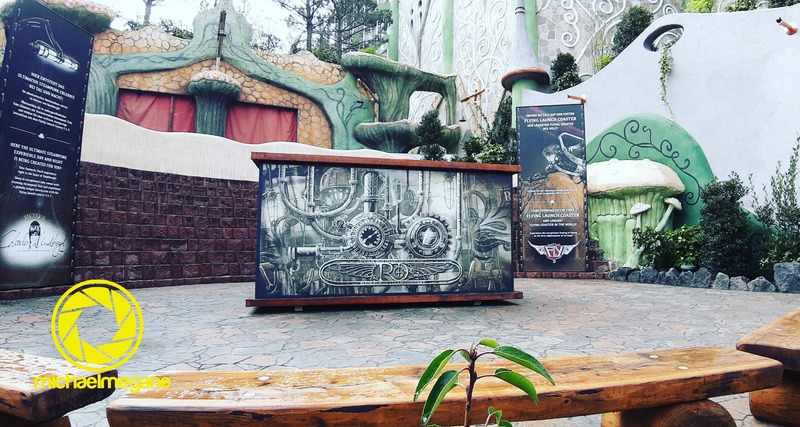 Seems like there are screens in the thing in the middle, maybe for some new teaser Video?

Ohh similar to what they had for Klugheim back in the day! Excited to see what vague video they loop on the screens This might be the first we hear of a soundtrack too? If I remember correctly from my visits in 2015, they played the Taron theme around the trailer screens, did they not?
L

Ethan said:
Ohh similar to what they had for Klugheim back in the day! Excited to see what vague video they loop on the screens This might be the first we hear of a soundtrack too? If I remember correctly from my visits in 2015, they played the Taron theme around the trailer screens, did they not?
Click to expand...