A few days ago, a game called Parkitect was announced on Kickstarter by Vancouver-based indie developers Texel Raptor.

The game is in a similar style to RCT 1 and 2 with an isometric view, although the graphics have been (heavily) modernized and composed in almost a cartoon style. Coaster editing is more dynamic, with the user being able to independently determine the size and bank angle of a turn. Shops must be stocked manually by maintenance people, which in the future will have to be done behind-the-scenes by designing service roads, etc. The game, obviously in very early stages, is available for viewing and backing on Kickstarter via this link. 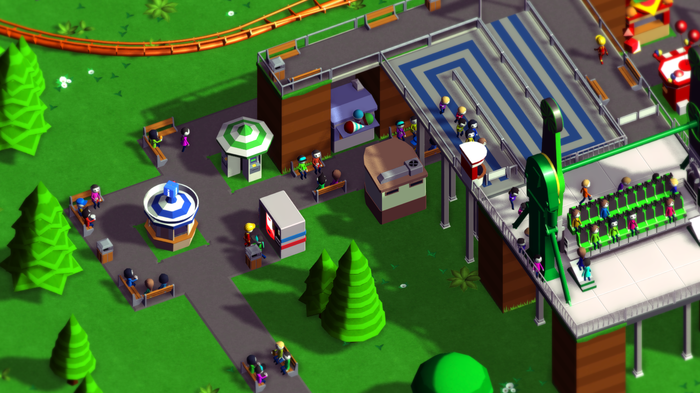 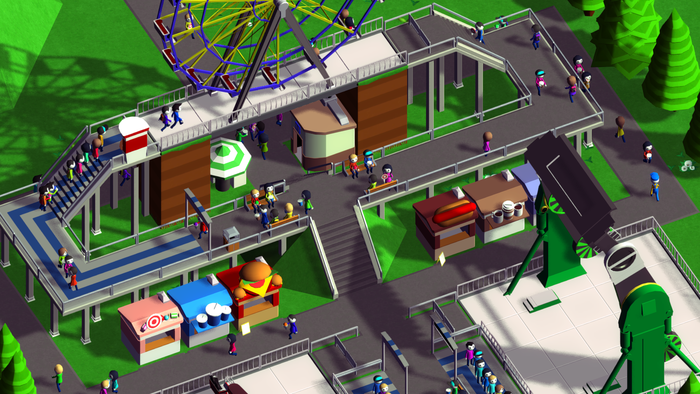 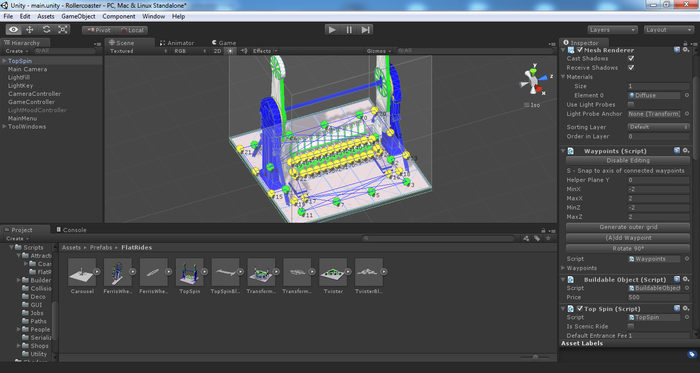 The pre-alpha is released this week on the official site. Already bagged a copy for $15
http://www.themeparkitect.com/

It's nowhere near finished but its starting to look pretty good. I'm sorry but that looks terrible! Even phone games have better graphics, it's like zoo tycoon for the DS bad.

Sent from my SM-G900F using Tapatalk

Sent from my VS840 4G using Tapatalk

I actually like the graphics. Games don't need amazing graphics to be amazing games. Theyve gone for an art style and stuck to it. It will split opinions but as long as the core gameplay lives up to the plans then I feel this isometric view will always beat out games like Planet Coaster and RCTW's 3D view because they are incontinent.

Here's a quick summary of my first few hours with the game.

My first attempt at anything was building a B&M style looper (Even though the B&M looper isn't in game yet, so i used the Arrow track) This one is clearly loosely based on Led Zeppelin, well at least to start.

I was mainly messing around with the track editor at this point. I think this demonstrates why I think the game currently needs steeper drops. The main drop looks too shallow although it works quite well for the zero G. The Zero-G is made just by rotating the banking on each piece of track rather than a specific element like RCT. This allows quite a lot of flexibility in size and shape of the roll. I definitely made my corkscrews too big but i learnt for later on.

Next up i tried a recreation. And since the arrow track is in game why not go for one of their most infamous coasters.

The 45 degree corkscrew was great here. A really handy addition for recreations. Especially ones as simple as Loop-screws. A more customizable half loop would be useful for the first inversion and the games lack of a simple shallow helix's is annoying at the moment. I actually made a much better rising and falling curve after the cutback in a later version but I didn't save it.

Continuing a general theme i tried making an aproximation of Loch Ness Monster. Not an exact clone but something very similar.

I'm slowly getting more used to the controls so this was easier than expected. You'll have to excuse the rubbish foliage. The in game options are a bit crap right now and combined with me generally being crap at them anyway it doesn't looks great. 2nd screen shows the rain effect. If you look at the 2nd pic it kind of shows how varying the the size of track pieces affects the number of supports placed.

Next up I tried playing with the B&M wing coaster. For some reason its limited to 90ft at the moment which is crazy because rides like Parrot Coaster and Gatekeeper are around 170ft. Anyway I went for a small custom X-Flight style design and messed around with the track options.

I was pleasantly surprised to find that diagonal zero-g-rolls work pretty well and as you can tell i discovered you can vary the size of lots of the scenery as well as change some of the tree colours.  The wing coaster is a bit limited at the moment due to its oddly short height restriction and the current lack of a half loop that steps to the side slightly making recreations of rides like Stealth, X-Flight and Gatekeeper pretty tough.

Finally last night i messed with the wild mouse. The wild mouse makes pretty good standard mice but i noticed the ability for swooping drops might make a nice Gerstlauer Bobsled coaster approximation.

The turns can only be banked to about 15 degrees but I think it works pretty well. The in game block brake system is currently broken (and being fixed for next release) but the ride runs pretty well.

Anyway I'll mess around a bit more later. not really played much with the woodies yet.

It looks way better than I was expecting. Hopefully they fix the drop steepness and liven up the graphics a bit more (not too too much, I love how reminiscent the art style is of RCT1 and 2), but it seems to have already addressed some of the biggest issues with the classic RCT titles. Tbh I'm more interested in this than RCTW or Theme Park Studio based on this update.

Enjoying the new updates. The building pieces are very simple at the moment (only 1 texture) but things should improve as more scenery is made.

Been messing around with my main park.

That B&M does look pretty nice. A lot better than other game's attempts at making B&M track.

I'd rather it looked "of a simple style" but played well than it looked stunning was the worst game ever (looks at Frontier...)

^I hope you mean Nvizzio, because Planet Coaster looks really good so far. RCTW on the other hand...

Staff member
Administrator
Moderator
There's not enough to see about coaster planet to make any judgement, other than their most recent past record of Thrillville and Screamride.

If they use any kind of free form coaster building, it will be awful.

Rctw is clearly pants though

Sent from my D6603 using Tapatalk

Best thing about Parkitect so far for me is the engagement with the community throughout the alpha process.
Theres a stream every week showing the creation of rides and assets. The developer is active on forums where there is a significant following (like New Element and Shyguysworld) not just the official site.

There's a real ease for modders too. I mean the games in pre alpha and theres already 13 mods listed here https://parkitectnexus.com/files/mod

The graphics may not be the best but from what I've seen from the main contenders this week PT has the best chance of taking RCT's mantle.
S

For me, the reason why RCT2's graphics remain timeless (even if the animations are choppy) is there's a charismatic aspect to it.

Parkitect feels like it's taken RCT3 aesthetic, added a little warmth to it, but locked you to the isometric view feel. I think they need to add more warmth to the graphics. More life. Make it look less like a CAD project.

I played this yesterday on my stream (www.twitch.tv/mushroomcf) But have uploaded he stream to my main YouTube =]

Parkitect had a update folks...

This game is getting better every update! I'm so excited for it's future.

Parkitect is coming to Steam Early Access next month

Also Muuuh has released what is probably the best park so far "Enchanted Kingdom".
Not bad for a pre-alpha game.