While I haven't been on many dark rides as coasters tend to be my cup of tea, Spiderman was first and foremost in my mind besides those dinky attractions at say Waldameer or Kennywood.

ECG said:
I'm not sure why I don't remember the ones at Gardaland. Were they not open when we went there for the CF Live?
Click to expand...

The pirates one was TOTALLY hidden underneath what appeared to be just a pirate ship walk-through thing, but the shooter was in a massive Egyptian temple style thing? 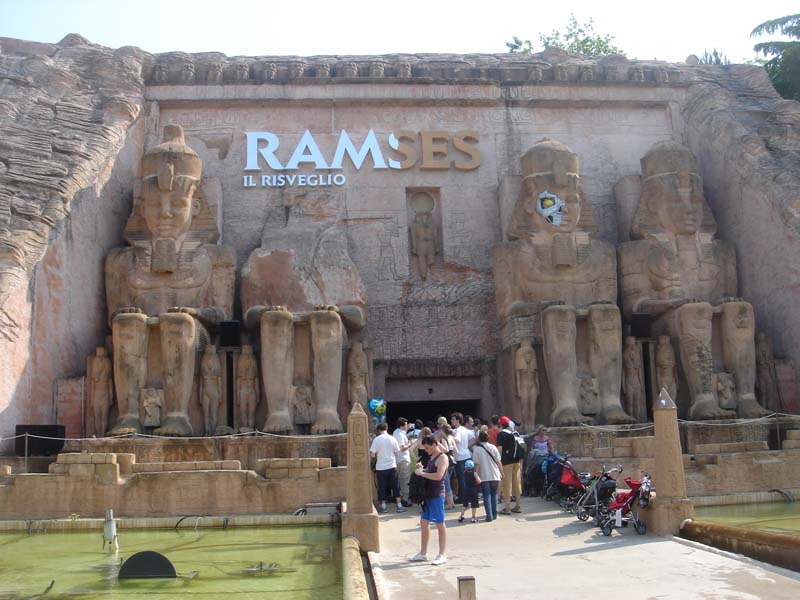 Joey said:
I thought Fata Morgana was... just boring? Beautifully crafted sets but really nothing special. I feel like people just praise it because it's Efteling?
Click to expand...

If anything, Fata Morgana being at Efteling makes it less likely to be praised, as it's surrounded by the strong competition of Droomvlucht, Spookslot, Villa Volta... etc.

If Fata Morgana were at Blackpool Pleasure Beach for example, people wouldn't believe their eyes! They would make much more of a fuss over it because its depth and detail would stand out even more.

I found it a very nuanced ride. The way the mood changes as you drift through each scene is so subtle, and creates a real sense of mystery. In contrast to what Joey said about it feeling like a warehouse, I think the 'sectioning off' of the ride with closed doors to each scene made it feel intimate - like you were the only boat in existence, on your own private journey.

On the subject of Efteling, if The Flying Dutchman were an entire dark ride (as opposed to 50% amazing dark ride, 50% average cred) I'm pretty sure it would be the greatest dark ride ever made. :--D
Click to expand...

Yes! I loved Fata Morgana for the isolation from the other boats and the subtlety which immersed you even more in what was happening in each scene.

And Flying Dutchman is great up to the point it turns from Dark Ride to cred.

I have a massive soft spot for storytelling and just absolutely adore Fata morgana and Droomvlucht for that reason, I also love Fata morgana for all the gorgeous vibrant colors in the palace part.
I'm also very jumpy so when riding Blå Tåget at Grönalund I was probably screaming more than majority of the children - that said, I can't help but love all the little things in there, I mean let's face it it's supposed to be like a horror train and it does scare me so mission accomplished, right?
I'm sure Thom remembers, I'm also sure he remembers how I whipped his butt in Maus au Chocolat which also is a neat ride, however there's something about the massive digital thing that partially takes away from the charm for me.
Honorable mentions go to Mystery castle (or Misery castle as Thom and I tend to call it) and Villa Volta, although I wouldn't normally count them to dark rides.

^ I always lose with Maus au Chocolat :lol: . The only person I've beaten was my sister after the third re-ride.

Staff member
Administrator
Moderator
Social Media Team
I'm in the "can't remember a bloody thing about Fata Morgana" camp. As in I literally have no idea even though I know I've ridden it. I'll have to have a look at some POVs to try and jog my memory, but it can't have been that good if I've completely blanked it.

I don't get all the love for Morgana either - droomvlucht is great though!
A

In no particular order

Bubble works - Was my first dark ride, I have a bit of a soft spot for the original.
Calico Mine Ride - Had my first go on it quite recently after the update, thought it was pretty good.
Spider man - Cant believe its 15 years old, so ahead of its time.
Indiana Jones Adventure - I didn't really know what to expect and was really surprised, that final part with the boulder was awesome
Tower Of Terror - not sure if you can genuinely call it a dark ride. I loved every second of it though, don't think I spent a moment in my seat.
P

^ I had to look up where the mine ride is. Knotts berry farm, should be going there next year so I'll have to look out for that!

Staff member
Administrator
Moderator
Social Media Team
^ Calico is really good, especially for a Cedar Fair park. I'm still in two minds as to whether to label it as a cred. I haven't counted it, but it's got all the elements of one.

Ooh, a tough one! In no order, these ones stick out as the top five.

1. Harry Potter (IoA)- I lied, this one takes the cake for the number one spot. It was actually just ridiculous in every way.

3. Pirates of the Caribbean (Cali)

For hilarity factor and, like Andrus said, old school charm, the Haunted House at Knoebels was pretty fab.

I also forgot about that weird submarine thing at Movieland in Italy. I remember just laughing the entire time at the absolute horrific amount of health and safety violations. I slipped on the wet concrete when they told us to run and then slipped on a steep metal step. It was amazing.

Staff member
Administrator
Moderator
Social Media Team
^How did any of us forget about the submarine thing?!

It was amazing. Running on wet metal steps before being trapped in a metal tube and getting waterboarded. Such a fab ride!
E

Thought some of you here will be interested in the film project titled Better Luck Next Time that I am creating about dark rides in Britain. We've done so much research and found some great discoveries about the creation of these attractions that were well loved and very influential in their time. Particularly on the original 5th Dimension, BubbleWorks and Terror Tomb at Chessington, and the Haunted House and others at Alton Towers.

We've been working closely with people like John Wardley and the teams that designed/built the rides, recorded interviews with many of them, and it's been a really great journey so far.

I can't post any links but search for Better Luck Next Time on Facebook and you will find our page with our first video trailer and more information. Should be a lot of fun if you remember these original rides and are a fan of the charm of such eccentric bizarre dark rides!

Staff member
Social Media Team
^ Some of us are already following the Better Luck Next Time project on Facebook, myself included. The recent trailer is fab! Looking forward to seeing more

My favourite has to be Harry Potter and the Forbidden Journey. It's just amazing how it throws you around with all the things in Harry Potter which I'm a massive fan of anyway.

Tower of Terror at Hollywood Studios WDW is also brilliant, from the preshow bit too the loading to the whole elevator moving and then falling up and down. It's just great.

Soarin' at EPCOT is also just a beautiful ride. The smells, the feeling of flying, the breeze, the views, it's just great. I love it.

Off the top of my head that's all I can think of.
J

Forbidden Journey is far and away the best dark ride, not just for the ride itself, but for the entire set up and queue.

Others that spring to mind are Spiderman, ToT (if it counts) and numerous others. I'm gonna add my name to the short list of people who have mentioned Dinosaur. I really enjoyed it, haven't done Indiana Jones though.

My Dark Rides/Walkthroughs I like are mainly from when I was little mainly relating to some of Adventure Islands best dark rides.

BlackBeards Pirate Adventure. My First ever Dark Ride that I remember very well. The first thing you did was read this sign telling you about you were going to go on a magical adventure on Blackbeards ship The Queen Anne's Revenge. After this you walk up the ramp onto the ship itself where you see a box with a Pirate being trapped in there saying to get him out of there. You then walked into a part of the ship where there was a beautiful woman who sang and all of sudden turned into a cackling snake. After this you went into the Dungeons which showed you how the Pirates tortured people to come out and go into the bottom part of the ship to see Pirates arm wrestling and sleeping with their tummies moving up and down.

Beezlee Bobs Trail. A cheesy little Ghost Train that took you through many scenes with a lot of Devils where you end up In hell before going through a few more quirky but cool scenes into the station I loved the ride with a passion.

Over The Hill. A revamp of Beezlee Bobs, but instead with added projections and animatronics before going into the surprise ending.

It's a Small World. I fell in love this ride when I went on in 2012 I loved the quirky tune to the animatronics not what I was expecting.

Bubble works. I was told this was quite a rubbish ride but going on it I found quite a good boat ride.

I really enjoy ones like Spiderman and Curse of Darkastle, but Harry Potter and the Forbidden Journey was just incredible. There was just a lot going on with all the animatronics and getting whipped around. It was a knock out of the park for me, and I think I even preferred it over Hulk.

Staff member
Administrator
Moderator
Social Media Team
I creamed myself over Transformers at Universal Florida. I was impressed with the Potter ones, but bloody hell, that Transformers was amazing. I rod it twice in 15mins because I was THAT impressed. I loved Transformers when I was a child (not an child in an adults body), so to feel like I was there taking on the bad guys was brilliant for me. It's the movement of it all, the crispness of the screens, the effects and the fact that I have a childhood connection to it makes it better than Potter.

Ian said:
I creamed myself over Transformers at Universal Florida.
Click to expand...

I (sort of) agree. I thought Spider-man was the best dark ride at Universal, but only because I rode it before Transformers. I really just love that ride system. I know it's not as new and shiny as Forbidden Journey's KUKA arm stuff, but I had so much more fun on these 2 rides. I suppose it didn't help that Forbidden Journey made me a bit queasy.
You must log in or register to reply here.
Share:
Facebook Twitter Reddit Pinterest Tumblr WhatsApp Email Link
Menu
Log in
Register
Top