You can see in the monorail footage that it’s quite a large area affected.

I was planning to go for the first time next season, now I’ll have to wait and see.
Click to expand...

To be honest I wouldn't delay your visit because of that. It's just one Attraction and a few restaurants/food stalls, if you look at it without emotion. It was an old attraction as well. While it's sad that it's gone, there are more than enough rides at the park to sspen your time on. If I were you I would wait until the rafting is running again and Eurosat is finished. It could be several years until this area is fully restored.

I'm heading there on Sunday for four nights. While initially I was SO sad it had happened right before our trip, as you say it's a small section of the park and I'm still 100% keen to support EP while they rebuild.

After losing the popular ride "Pirates in Batavia", the owner family Mack is thinking intensively about a new concept. At the moment we can already confirm that there will be another attraction there for the whole family in the future.
Click to expand...

Bit vague (probably because they themselves haven't decided yet) however I assume the phrase "new concept" could mean something entirely different to Pirates or a new modern version of it.
Last edited: May 30, 2018

It means that it’s only been a few days since the fire, so obviously they have not had any sort of time to be able to plan an attraction that would take months/years to design.

The phrase “New Concept” is something vague enough they can tell people asking “what are you gunna do??” without giving false information.

There’s no point in trying to analyse it any more than that because I’m pretty sure they don’t have any more of an idea of what’s going there than we do right now, because they haven’t even cleared the wreckage to see what they’re even dealing with yet.

Staff member
Administrator
Moderator
Social Media Team
There's no way the Mack family are going to decide anything major for week/months yet. They might say "let's do something innovative and creative for the family", but that's pretty obviously what they'd do. They'll still be dealing heavily with all of the various authorities, insurers, various funding boards, etc, for weeks after a disaster as big as this. They won't have even thought about speaking to a manufacturer.

Stop expecting them to announce anything meaningful until at least the end of the summer.

The only way they will, is if the demolition of Pirates in Batavia was already on the cards and a concept for it's replacement was already in the pipeline. THEN, they may have been able to move things around and might have a clearer idea of what they would do. Seems unlikely, though.

EDIT: @Crazycoaster beat me to it.

Staff member
Administrator
Moderator
It would actually surprise me if the team responsible for park developments have even had a meeting about this yet. Never mind the fact that the meeting room itself may be a pile of cinders, just scheduling a meeting might need to be done days in advance, or even weeks if it involves external companies. The fire was on Saturday. I have a meeting tomorrow with my supervisor and a student about the latter's master thesis, all three of us work in the same building on the same campus, and we scheduled it last week. Good luck getting a team of designers together about a project nobody had even thought of doing a week ago on shorter notice than that.

I don't think they are going to do anything before the area has been fully cleared.

The fire happened 4 days ago. I would doubt they've even begun brainstorming what to do with the space yet.

^Unless they had plans to renovate the ride before it burned down.

I don't see how they want to renovate a pile of ashes. They may have had plans before, but since the attraction they wanted to apply them to doesn't exist anymore, they probably need to reconsider what to do and whether to use ideas from the plans for Batavia or start something completely new. In any case, only parts of concepts for Batavia are usable.

ATI said:
^Unless they had plans to renovate the ride before it burned down.
Click to expand...

And those plans all have to be changed now since it's no longer a simple renovation.

Not to mention that Mack Solutions building has also been damaged in the fire, which means their creative forces are now working somewhere else - so that move of all equipment etc. alone would take a few days. This is vague because all they are saying is that they're not going to leave a massive charred mess there for long.

Here you can see just HOW INSANELY FAST the fire started and spread.
Beginning with a bit of grey smoke at 0:25, it literally took a SINGLE 180° SPIN OF THE OBSERVATION TOWER till all was completely engulfed in flames and lost forever: 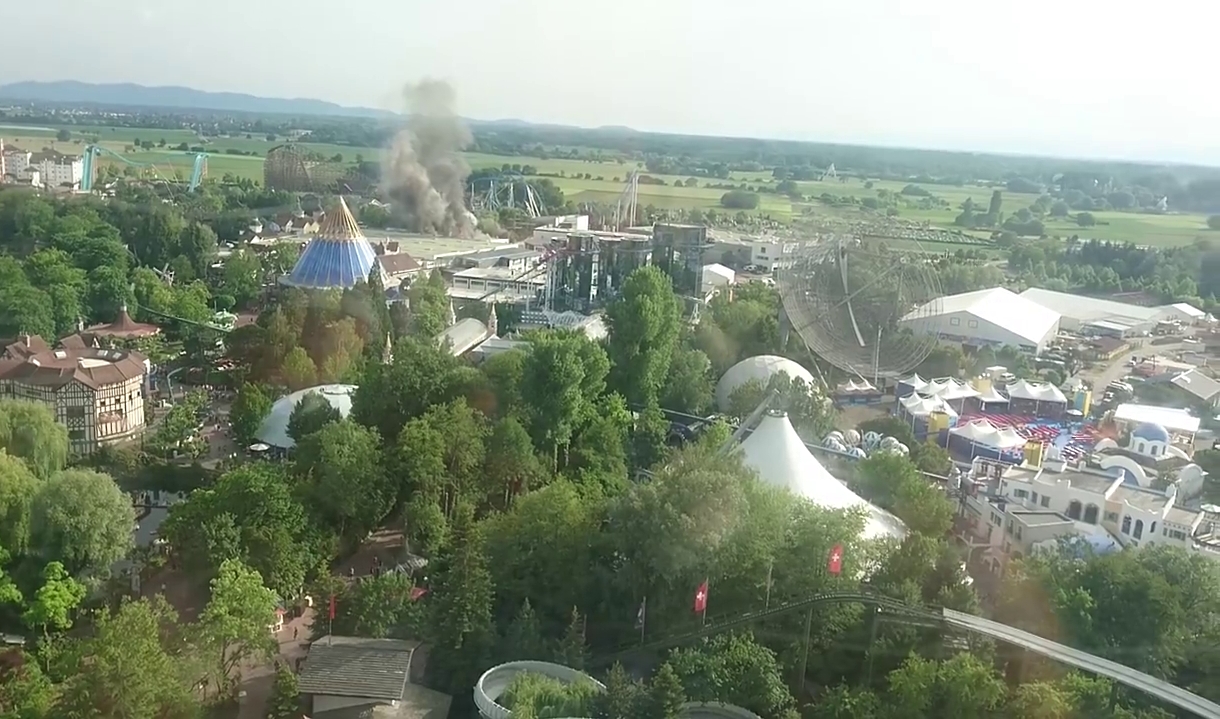 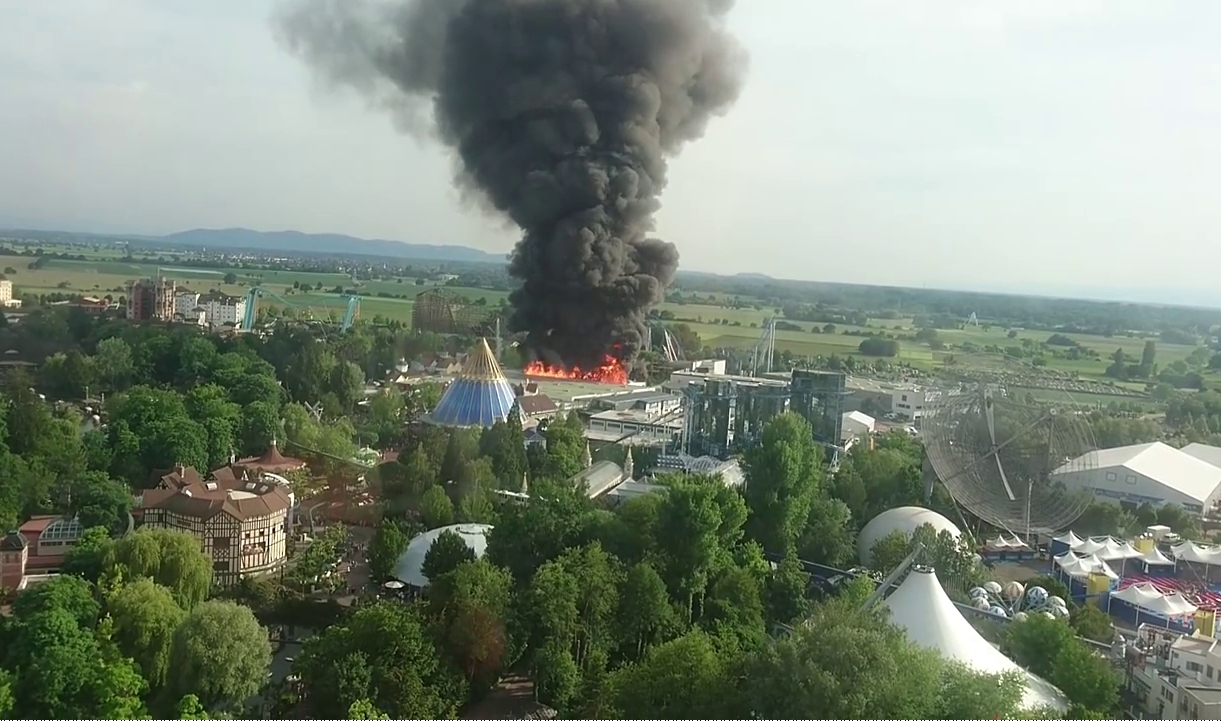 CRRRRAAANNNNNEEESSSSSSSSS said:
Here you can see just HOW INSANELY FAST the fire started and spread.
Beginning with a bit of grey smoke at 0:25, it literally took a SINGLE 180° SPIN OF THE OBSERVATION TOWER till all was completely engulfed in flames and lost forever:

Staff member
Administrator
Moderator
Social Media Team
The thing with fire spread is that it's not as straightforward as 'visible flames'. The fire was likely already raging heavily inside the building in the first picture, but was being contained within the roof. Eventually a portion of the roof gives way, with a domino effect bringing the rest of the roof down, finally releasing all of the smoke and flames that had previously been contained. Not to mention that once the roof gives way there's suddenly loads of air available for combustion, whereas the fire was likely being starved before.

That's not to say it wasn't insanely fast, though, and just goes to show why engineers (like me!) work very hard on fire systems within all kinds of buildings.

The tops of facades have been already removed to help with access for the clear up.

Presumably this tree was deemed unsafe after the fire and has been removed.

The park are desperately trying to get Fjord Rafting reopened in time for the summer. The trough is covered in in debris and soot.

Since Fjord rafting was running when the fire started the lake has been contaminated, and therefore is now being pumped out ready for refilling with clean water.

From @BjornWanten on Twitter what was once the entrance to Piraten. The tops of the facade have been demolished.

It would seem the fire actually broke out from part of Fjord Rafting rather than the backstage areas as had been previously assumed.

EP's French twitter wrote:
The criminal police investigations carried out following the fire at the leisure park at Rust and the preliminary evaluation of the results of the technical expert reports indicate that the fire seems to be in the "Fjord-Rafting" area.

The origin of the fire is probably due to a technical failure based on the current state of the investigation. For now, there is nothing to indicate theinvolvement of a third party in the incident.

The technical investigations of the fire experts will nevertheless continue for some time and the final conclusions are not yet established.

On CoasterFriends.de someone has drawn onto Google Maps the location of the tunnel (red oval) under the buildings complex, and the red circle marks where the flames were in the YouTube video above.
Last edited: Jun 6, 2018

CRRRRAAANNNNNEEESSSSSSSSS said:
Here you can see just HOW INSANELY FAST the fire started and spread.
Beginning with a bit of grey smoke at 0:25, it literally took a SINGLE 180° SPIN OF THE OBSERVATION TOWER till all was completely engulfed in flames and lost forever: