Rode Symbolica yesterday on my first visit to the park. Symbolica was also my first ride of the day.

The outside is even better in person than in photos and the preshow is good with the extra surprise at the end and a great animatronic (the efteling elf guy). The actual ride has the three paths so it's got some rerideability (although not so much at the moment because the queues are long)! We chose the treasures path.
The ride is stunningly themed from start to finish. There are some beautiful rooms in it, including the whale room, astronomy room (which looks much better in person that the photos above) and the feast scene room. I can't get massively excited about these trackless rides (and tbh I'm not a dark ride enthusiast, although I do love some dark rides) but for what it is, this ride was a stunning example of what could be done and I think will really appeal to families. The attention to detail was fab, as it is with the whole park! For me it seemed like a great addition to the park.

I finally rode it today and I loved it. I got four rides on it. One ride of each tour and then a re-ride on the treasure tour. Queue was moving pretty fast and the single rider queue is a blessing! It was 5 mins all day.

It's utterly gorgeous visually. Incredibly themed all over. It looks much better in person than it does on any photo/video.

I don't get the complaints about the lack of story. In my opinion, the context that the ride has works great.

Basically, you get invited for a royal meeting with the king. During the queue you get prepared by this extremely "proper" servant. He is constantly reading rules and reminding everyone that you need to look tidy, etc. He's a really funny character if you speak Dutch. Lots of puns and just the way he's so obsessed with getting everything perfect is done in such an exaggerated way that's it's fab. He does say some English things but it's just not the same. Anyway, during the preshow he starts reading all this rules while Pardoes (who is naughty and a bit of a rebel) suddenly interrupts him. He points out that this is boring and how we might as well do something more fun. Then he opens up the stairway revealing a special passage (which is a brilliant effect!). Despite the servant begging you to not go in, you enter the pathway and via a spiral staircase you go to the station.

Then you get into the cars and get a tour around the palace, passing the observatory (meeting one of the characters who seems so concentrated on his work that he doesn't even notice guests passing by), panoramic balcony, botanical garden, a library-ish area. Most scenes have Pardoes chanting spells to make stuff happen. Sometimes it goes a bit wrong (the whale nearly breaking out of the aquarium). Eventually you get in the royal room which has Polle delivering a pile of pancakes for the banquet, Pardoes and Pardijntje and the proper servant sitting at the table. You also see the king who seems too concerned about drinking lots of alcohol that he doesn't give a damn that you were just wandering around the palace freely and going through areas where you shouldn't be.
It's not a complicated story but it works brilliantly as a context for the ride. The ride itself is so imaginative. There is such a large amount of fantasy thrown in. Some might find certain stuff random, but I feel that's the point. It's a palace of a fantasy world full of bizarre things. It never gets *too* ridiculous though.

The preshow is short but very sweet! During all four rides it resulted in people gasping and wowing. Definitely left a big impact on the GP. I had avoided spoilers so I was quite impressed with it too.

For some reason I found it really re-ridable. I rode it four times and it still left me wanting more. I never get that with dark rides. There's just so much to see, so much going on and the three tours have some subtle differences (even aside from the "exclusive" effect in the second to last room that each tour gets).

The music is wonderful and stuck with me for the rest of the day. I could hear people whistling it in other areas of the park too.

My problems with it then.
First of all, the biggest problem; the interactive stuff. The second to last scene has an effect that you can activate by pressing buttons on a touch screen which is only on the front row. Each different tour has its own scene. However, it's unresponsive, unnecessary and left a lot of people confused. The effects were really cool so I would prefer it if they just made it automatic instead of having to have people press buttons in order to get something to happen. During my first ride nobody in the front row did anything so nothing happened. Very anti-climactic. But even if people pressed buttons, the actual influence on the effect seemed really delayed?

The outside queue is fine. It's green, has nice music, the servant guy saying stuff and some riddles plastered on the walls. But like Baron, it could've been more. It's mostly just two big cattlepens and some pathways inbetween. I wish they could've made it like a true garden instead of just a couple of trees. Aside from Vliegende Hollander, which has (one of) the best themed queue(s) I've ever seen, Efteling still doesn't quite get queues right.

Small thing. I'm not a big fan of Pardoes' voice. I imagined it differently all these years and it just didn't work well for me.

Overall, it's an excellent addition to the park. It seems to be a big succes for the GP. The small points of criticism some people had about the timing being off and stuff not working seems to have been fixed. It's a great ride for all ages. It's modern, but still has all of the traditional charms of Efteling rides. No stupid 3D crap or screens. Just a traditional dark ride with a modern ride system. Yeah, I'm really impressed.

Efteling and Phantasialand have been setting a new standard of theming with their new additions over the past ten years. I can't think of any other park in Europe on a similar level of such consistent high quality theming on every ride they add.

SilverArrow said:
this ride was a stunning example of what could be done and I think will really appeal to families. The attention to detail was fab, as it is with the whole park! For me it seemed like a great addition to the park.
Click to expand...

And to think this thing cost over 35 million quid to build and Derren Brown cost something similar and yet look how big of a flop that was... Just goes to show what you can really do if you have the right team together.

Blast from the past, with a bit of a silly question: Is the whale real or does that bit use screens? I think it's real, but can't be sure from POVs

Yeah, they imported a live whale from the Pacific just for that scene. It took 3 cranes to lower it into its tank.

Sent from my VS501 using Tapatalk

Can't tell if related to April Fools or not...

GuyWithAStick said:
Yeah, they imported a live whale from the Pacific just for that scene. It took 3 cranes to lower it into its tank.

Sent from my VS501 using Tapatalk
Click to expand...

Nice! They must have done it at night though, none of the construction pics managed to catch it?

OK, is the whale a model/animatronic or does it use screens?
B

After some new theming elements in the ride and queue and some other improvements and changes over the past year Efteling are now adding another interactive element. 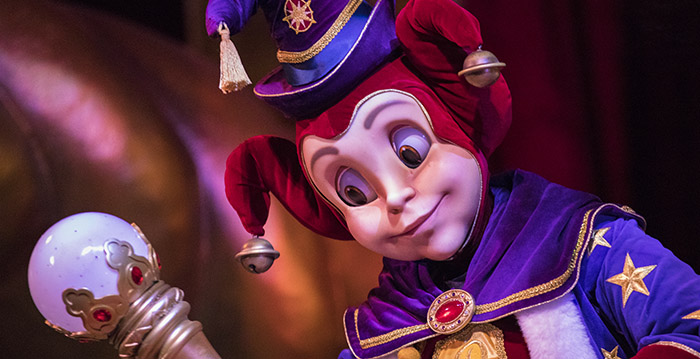 "The Efteling will sell interactive wands next autumn. With the so-called Twinkeltoortsen visitors will soon be able to activate special effects in and around the newest Efteling attraction Symbolica.

The Twinkeltoorts is the magic weapon of Pardoes de Tovernar, the main character of Symbolica. He treats guests to a guided tour through the secret rooms of the Palace of Fantasy. In the attraction, the jester keeps the striking attribute in his hand.

"With an interactive Twinkeltoorts you will be able to bring the magic to life at seven points in the themed area Fantasierijk", says design coordinator Peter Koppelmans. "In the scenes of Symbolica, the interactive torches clearly respond to the magic of Pardoes." He promises that the work will take place as much as possible outside the opening hours.

A year after the opening, the Efteling is still not entirely satisfied with the dark ride of 35 million euros. "Certainly at a new attraction like Symbolica we keep a close eye on whether there are any improvement points," says Koppelmans. Multiple new lights, a moving car in the queue and a floating cake have been added in recent months. From today, passengers will also feel falling drops in one of the scenes. "This way we want to immerse our guests even more."