Social Media Team
I can't be titsed to dig through pages of forum to search if a thread already exists. Please merge any threads if this is a duplicate.

If you missed the news from a while back...Hersheypark acquired land from the old golf course that used to sit next door to the park. It sounds like the park is meeting with the city on June 5th (still tomorrow as I write this...but for all intents and purposes...today) to discuss expansion plans.

For those not familiar with this new tract of land, here's a photo that shows off the area somewhat well. All those trees behind Skyrush. Also, the relocated road is just to the left of Skyrush's drop and will form the boundary of this expansion:


So it's a pretty big area...35 acres. From what I can see from Google Maps, this expansion will increase the park's size by 50%.

So...we know there will be infrastructure...paths and buildings and probably some flat rides and the like, but let's speculate on the meat! Hershey already has a fairly diverse line up. They have a hypercoaster, an invert, a launched coaster, a spinner, a mouse, multiple wooden coasters (don't you dare say RMC Lightning Racer), and a beyond vertical drop coaster to give them an already awesome selection of coasters. A dive machine, wing coaster, flying coaster, and raptor/t-rex all seem like potential picks to me, but nothing jumps out as a major hole in their line up.

So what do you think? Place your bets!

I think this is wonderful! It can really allow the park to have a nice big attraction to loom over the entrance gate. Speaking of, this would be a great time to expand the entry gate. Right now, the entrance plaza is tiny(excluding the whole Chocolate World thing). If they opened it up into this land, they can really open the area up, probably adding in a new ride or two in the process. 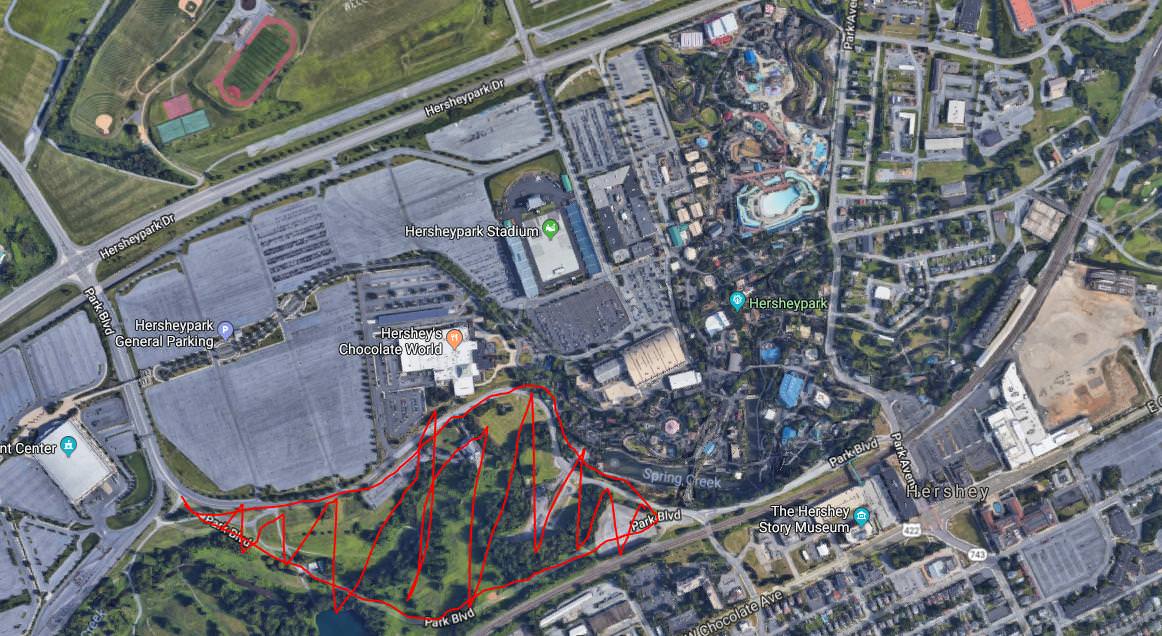 Here's a better visualization of the (assumed) land bought. As you can see, it's right up against the entrance area, even going back behind Chocolate world and to the parking lots. Maybe they'll even add another gate at the far end? Who knows. Yay speculation!

Also +1 to the word Titsed being absolutely fab.

And we have @gavin to thank for that. I remember him using it on here a few times quite a while back.

GuyWithAStick said:
I think this is wonderful! It can really allow the park to have a nice big attraction to loom over the entrance gate. Speaking of, this would be a great time to expand the entry gate. Right now, the entrance plaza is tiny(excluding the whole Chocolate World thing). If they opened it up into this land, they can really open the area up, probably adding in a new ride or two in the process.

Here's a better visualization of the (assumed) land bought. As you can see, it's right up against the entrance area, even going back behind Chocolate world and to the parking lots. Maybe they'll even add another gate at the far end? Who knows. Yay speculation!

Also +1 to the word Titsed being absolutely fab.
Click to expand...

You're absolutely right - there are rumors that the entrance is going to get a big overhaul. Hopefully they'll get rid of that long walk up to the gate. And thank you for posting the overhead image - I actually tried to do it and the upload kept returning an error.

You know damn well that response was inevitable

in all seriousness a family coaster in the style of Firechaser express wouldn't be a bad include for hershey, but it's probably not the huge coaster everyone wants.

In all seriousness though I'm really excited to see what the park does with this land. Hopefully they pull out something big and unique for 2020!
Last edited: Jun 5, 2018

I reckon a nice Intamin LSM Launch Coaster like Taron or Maverick would suit Hershey well. They do have Storm Runner, though, so maybe a family launcher would work better.

Staff member
Administrator
Moderator
Since we're speculating wildly anyway, allow me to go the extra mile and do some real wishlisting. Bear in mind I've never been to Hersheypark or for that matter talked to anybody who's ever been within a few hundred kilometers from the place, so I have no idea about its feasibility. This is based on some idle glancing at RCDB and maps of the area.

As you can see on the picture GWAS posted, the newly acquired area is right next to a residential area. There is some buffer zone in the railroad and what appears to be warehouses, but it seems plausible that any large development there would face noise complaints.

However, north-east of the stadium is a large expanse of parking lots and offices. Pretty poorly utilized space, considering its potential. Its only neighbours are a highway and what appears to be a disused air strip. And the stadium, of course. No modern coaster could possibly influence the noise pollution over there to a significant degree. I would propose moving all those offices and parking spaces into the newly acquired area, which would free up land for park expansion over there instead. That way, the park would fit a pretty compact and rectangular shape instead of a long and confusing banana shape. It would keep distances down, and leave no dead ends. The entrance would kind-of be tucked away in the corner, just like today, but at least everything would be neatly laid out inside the park proper.

As for what to put in the idle space, I don't have many ideas, but there wouldn't be many restrictions either. Huge and towering B&M? From-the-ground-up RMC? Intamin P'n'P? AquaTrax? There would be plenty of room for anything the park could afford. In a pinch, Wildcat could be retired too, it's already 22 years old and sort-of redundant with Lightning Racer.

The downside of this is that it would require a large green area to be paved over, the new expansion would start on a former parking lot, and the entrance wouldn't get much attention at all. But overall, I think the park (and its neighbours) could get much better use out of the area between Wildcat and the stadium than the green belt, as long as they're willing to move some administrative functions around.

I forgot about this! I've alway thought they should RMC Wildcat, as it's a PoS and a bit silly to have when Lightning Racer is literally right next to it. But with this expansion coming it looks like Wildcat is here to stay for a while longer.

I'd like to see another B&M at the park, especially considering Great Bear is the only one. I don't really see them building a hyper or giga, and a standard floorless and sit down is probably unlikely as well. I think a big swooping wing rider makes the most sense, but a flyer would be awesome as well.

A Raptor/T-Rex would also be awesome, but I feel like they'd rather go for something less intense. They already have some pretty crazy Intamins and it's not like they're in need of another insane airtime machine.

"A reader did attend the meeting held about Hersheypark's big expansion and learned a few things, though most of the major details were kept quiet. They did confirm that the park plans to expand into the property north of the new Park Blvd road that was formerly used as a golf course. Hersheypark also mentioned that the park's Front Gate and tram loading area will moved to a new location in time for the 2020 season. While they were not entirely specific on the site of the new Front Gate, they did say that it would move to the "north-east" and would be closed to Hershey's Chocolate World than the current one. And finally, it sounds like they will relocate the path that Spring Creek, the waterway that travels through the site, takes as part of the new land's development."

Youngster Joey said:
While they were not entirely specific on the site of the new Front Gate, they did say that it would move to the "north-east" and would be closed to Hershey's Chocolate World than the current one.
Click to expand...

That sentence really doesn't tell much, indeed. If I'm reading the map correctly, the current entrance is in the very southwest corner of the park, so any move would necessarily be to the north-east. It is also, however, as close to Hershey's Chocolate World as it can get. There's nowhere it can move without being further away from the place. That is, unless they're planning to develop the parking lot south of Hersheypark Stadium, on the other side of the great building north of the current entrance.

If they have all that new space think they need a crowning jewel for the new area. Wonder if they may put it as a new 'land' like some parks do with a big new coaster as the centre piece. Some great ideas already mentioned in this thread and I think nearly any of them would be a strong addition to a great coaster line up ( on paper, hopefully this time next week I'll be on my way there)

T Sex or a new Vekoma like a Firestorm, would be amazing for Hershey to announce Vekoma back into the US with one of those beasts.

Social Media Team
August 2nd will be a great day for Pennsylvania based enthusiasts - this AND Kennywood!


These two articles detail what we know of Hersheypark's expansion pretty well. They even include site plans with footers: 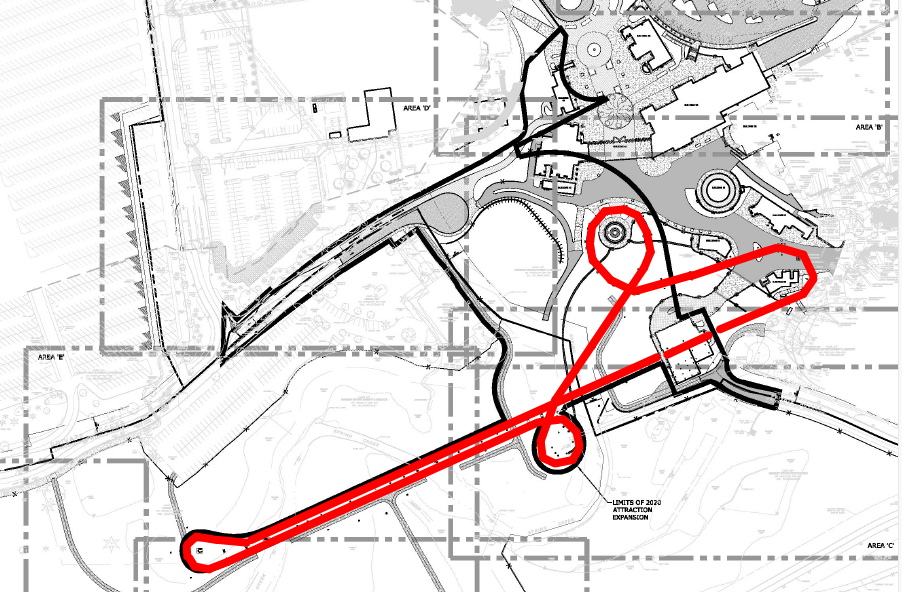 To put it into perspective, Skyrush's western turns can be made out on the right side of the print, just below center. In some areas, the footer pattern is crystal clear. A hammerhead style turnaround is evident in the lower left corner of the print as well as the two helices in the middle of the ride...but other areas are a bit difficult to figure out. There appears to be a hill before the hammerhead but the footers for a potential lift are hard to make out. Could it be a B&M giga? Logic says sure, but I'm hard pressed to say that the given layout offers enough space for those tall elements. Oh well...we'll find out soon enough.

If somebody can overlay this drawing with Google Maps and provide a scale as a means to try and measure out some of these potential elements, we might be able to better gauge the size of this ride.

The plans are shown with the, what i believe to be, employee parking lot (or possible overflow) for Chocolate World.

I do believe that qrea IS under a height restriction as well, so no giga possibilities (iirc, kissing towers hill is the tallest point they could have built at the park....but i could be wrong).

Current rumor/speculation is stating a possible revamp of the plans B&M submitted back in the day for Skyrush.