Very exciting! This park will be one to watch for sure!
EDIT: Linked to an actual info article as opposed to a Facebook post.
Last edited: Jul 3, 2020

Very exciting! This park will be one to watch for sure!
Click to expand...

I do wonder what the major rides and attractions will be

Here is a picture of the expansion 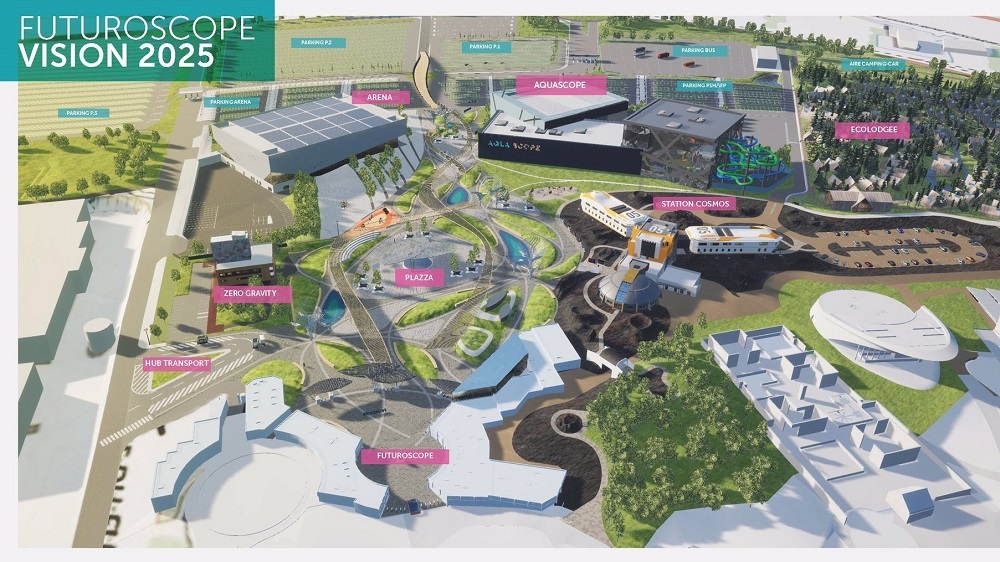 No creds. This is more like a Disney village style area with a lot of stuff to do after your day at the park ! The objective with this is to get 2.5M guests by 2026 and will create 300 direct jobs and 450 indirect ones. The goal is also to make the visibility of the park better until 2050 !

As for new rides one of the old attractions closed and is getting demolished, and is probably be replaced by a dynamic cinema from Dynamic Attractions in 2022 !
The director of the park said that more big projects is coming at the park by the end of 2021.

There could be creds. The above image is mainly depicting the second gate as I understand it.
Also important news of this announcement is that CDA will now finally have the majority of the shares in the parc (55%)

I felt like this all got announced the other year but maybe it was a proposal and now it's officially going ahead. (just read the article, announced last year, glad I wasn't going mad)

One of the things I love about Futuroscope is the really interesting architecture, actually feels futuristic and different. I'm a bit disappointed the arena and waterpark look normal on the exterior but I'm sure both will be great additions to the resort. Yay for a hotel looking all moon-basey being added.

Yesterday was the press conference for the new invest plan so here is what will happen to the park in the future ! At the end of 2025 2/3 of the 304M€ will be invested.
First of all the park will add one new major ride every 2 years and 1 refurbisment of old ride every year.

Now let's have a year by year look at it:

2020:
Start of the invest plan with Objectif Mars and Zero Gravity an indoor free fall center

2022:
The park will open a new pavilion next to Objectif Mars called "Chasseurs de Tornade" it will be the world's first Dynamic Motion Theater from Dynamic Attraction. It will be an immersive adventure mixing real sets, actors, screens and a huge rotating platform with 120 seats !

Also in 2022 the park will open it's first hotel called '"Station Cosmos", it will have 76 rooms and "Hyperloop" a rollercoaster restaurant

Finally for 2022 in Spring will open the "Arena Futuroscope". It will be a show venue that can host 6000 peoples

The park will open it's second major ride called "Mission Bermudes" it will be themed to the Bermuda Triangle and we know nothing except this concept-art. Looks like a Mack Rocking Boat or I can be totally wrong haha

2024 will also be the grand opening of Aquascope a brand new water park !

Finally nothing said about the 2025 major ride except it should open in December 2025 and it will be a brand new rollercoaster !

Here is the repartition of all the costs of the project

Last thing is that now the Compagnie des Alpes bought more shares in the park and now owns 55% of it.

I can't wait to see all those exciting new additions in France !!


EDIT: Here's some concept art of the hotel that I've found

Staff member
Administrator
Moderator
Social Media Team
Wow, that's a heck of a timeline announced! It feels rare that we get this much detail on year-by-year investment plans - it's refreshing in these trying times. Or maybe I should be a bit less optimistic and a little more cynical...?

Some nice concept images, regardless.

Hixee said:
Wow, that's a heck of a timeline announced! It feels rare that we get this much detail on year-by-year investment plans - it's refreshing in these trying times. Or maybe I should be a bit less optimistic and a little more cynical...?

It feels similar to when Walibi Belgium (which of course are also under Compagnie des Alpes) announced their 5 year investment strategy back in 2017(?) for 2018-2023. This has more detail (or at least, it seems that way), but Walibi's plans showed when every area would be getting a refresh, a collection of new rides to come, etc.

I think a little bit of cynicism is fair enough - again, looking at all the changes to Walibi Belgium's 5 year plans. But equally, they've followed through with the key things, and other things are more being pushed back than cancelled. So I think there's also good cause for optimism too that a good chunk of what is being shown is going to happen sooner or later too.

The one thing that jumps out at me if that by the end of this huge expansion, they're hoping to get an extra 650k visitors from this - that's more than a third of the number of people they got last year. In about 5 years, and in the current times, that's huge.

JoshC. said:
The one thing that jumps out at me if that by the end of this huge expansion, they're hoping to get an extra 650k visitors from this - that's more than a third of the number of people they got last year. In about 5 years, and in the current times, that's huge.
Click to expand...

Futuroscope has always kept their attractions fresh and invested in lots of new things over the years so I think what we're seeing in these plans will mostly go ahead. Both of those hotels look great, it'll be nice to have some quality themed hotels under the parks branding alongside the partner hotels already there. With the arena and waterpark there will certainly be a huge increase in demand for hotel rooms.

The concept art for that hyperloop restaurant is great, I only saw a slightly altered pic of the Alton Towers one yesterday.

That motion theatre concept is amazing, excited to see that become a reality. Hope they've also designed a cool building for the exterior.

The "Mission Bermudes" ride almost looks like a Shanghai Pirates ride system. Could be quite an exciting addition to the park.