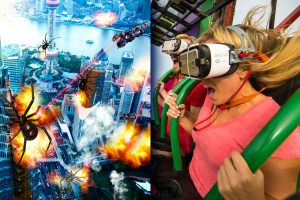 Park guests will become pilots of a futuristic gunship under attack by mutant spiders during the intense, interactive ride that features a high speed vertical ascent up 41 actual stories that transforms into 100 virtual stories while teetering off the edge of a helicopter. On the way up they will have a high-intensity gun battle against a giant arachnid, spewing baby spiders that virtually crawl all over the rider’s body. The thrilling 10-second fiery plunge straight down at speeds up to 90 mph (145 km/h) between towering skyscrapers concludes in a final showdown with a spider the size of a van, teeth-gnashing and in full attack mode.

“As the leader in innovation, Six Flags launched the very first VR coaster experiences. Now, we are taking virtual reality to the next level with the introduction of the first VR drop rides,” said park president Neal Thurman. “Drop of Doom VR plays upon two of our greatest fears – extreme heights and spiders – and delivers an entirely new thrill for the spring 2017 season.”

Read more about new virtual reality attractions coming to parks in 2017, including Drop of Doom VR, in our Forum Discussion.