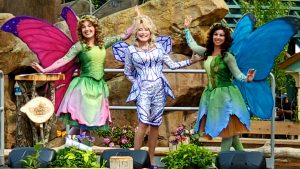 May 10, 2019 – Dolly Parton officially opened Wildwood Grove, the largest expansion in Dollywood theme park history. At a cost of $37 million, Wildwood Grove is Dollywood’s largest capital investment ever and is the first new area added to the park since Wilderness Pass in 2008. Wildwood Grove features eight new attractions including Dragonflier, a Vekoma suspended family coaster.

The wide selection of family rides includes Black Bear Trail, a “Pony Trek” ride from Metallbau Emmeln, a set of Larson Flying Scooters named the Mad Mocking Bird, and a trio of new rides from Zamperla including the Sycamore Swing, a traditional pirate ship, Treetop Tower, a Samba Tower featuring gondolas themed as giant acorns, and Frogs & Fireflies, a small Jump Around kiddie ride. The centerpiece of the area is the huge Wildwood Tree that features nearly 650 lighted butterflies and almost 9000 leaves.

The expansion completes the company’s commitment of spending $300 million on the park over a ten year period and does so four years ahead of time.

See what our members are saying about the park expansion and the Dragonflier coaster in our Forum discussion.