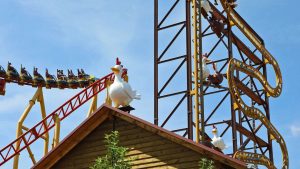 October 13, 2018 – After minor delays testing and fine tuning the ride, Wilde Hilde opened at Schwaben Park. The Roller Ball coaster by RES (Ride Engineers Switzerland) is the first of its kind and the first coaster built by the company that specializes in flat rides and water rides. Standing 82 feet (19m) tall, the family friendly coaster features a vertical chain lift hill and five cutbacks along 328 feet (100m) of track with four-seat gondolas on one side of the track that rotate similar to Intamin‘s Zac-Spin 4D coasters. However, the coaster uses magnetic brakes just before the free-fall cutbacks to prevent the gondolas from spinning upside down. 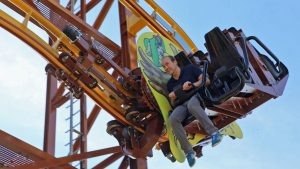 See what our members are saying about this new type of coaster in our Forum discussion.