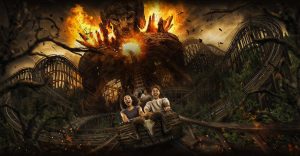 January 7, 2018 – Today, Alton Towers revealed Wicker Man, their new attraction for 2018. Wicker Man is a wooden roller coaster built by Great Coasters International, Inc.. Although the construction of the coaster has been known to the public for some time, Wicker Man’s name and theme was officially revealed on its own website today. It has previously been labelled “SW8”, following Alton Towers’ tradition of speaking of their new coasters as “Secret Weapons” until their name is officially revealed.

Wicker Man is the first wooden coaster to be built in the UK in over 20 years, the previous being Megafobia at Oakwood in Wales, which opened in 1996. Wicker Man has a total elevation change of 57.6 feet (17.5m) and a length of  2,028 feet (618m). The coaster is themed to a shadowy cult called the Beornen, which is said to live in the woods surrounding the theme park. This group has also been featured in the marketing of the coaster, which used the tagline “Be chosen”.

Alton Towers claims, somewhat erroneously, that Wicker Man will be “the world’s first rollercoaster experience fusing wood and fire”. Fire effects have previously been incorporated on a wooden coaster with Terminator Salvation: The Ride (later renamed Apocalypse the Ride) at Six Flags Magic Mountain near Los Angeles in California, USA, which was constructed in 2009.

Follow the construction and announcement of Wicker Man in our Forum Discussion.