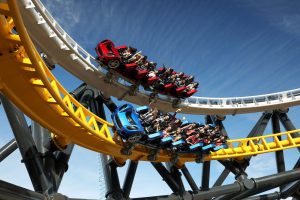 January 9, 2020 – The long delayed, or should we say long awaited, Premier Rides dueling steel coaster finally opened at Six Flags Magic Mountain. Branded as the “world’s first single track quadruple racing coaster,” West Coast Racers is a quasi Möbius coaster that features four separate LSM launches reaching a top speed of 55 mph (88.5 km/h) as each train navigates four inversions – three zero g rolls and a zero g stall. The twisted layout includes 14 track crossovers and a “high five” element where the trains bank toward each other almost allowing riders to high five those on the train they are racing.

The highly anticipated coaster was originally scheduled to open in 2019, but suffered many delays and didn’t even begin construction until April of last year. 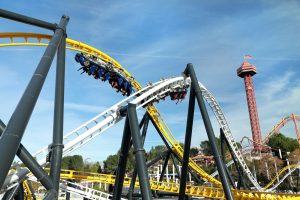 The park partnered with the Burbank based West Coast Customs on the theming of the new ride. The shop is known around the world for their car customizations, and they worked with the theme park on designing the ride vehicles for West Coast Racers. The company also created the narration for the “pit stop” section of the ride, where vehicles wait for their second blast around the track. The pit stop area provides riders with an “inside look into the West Coast Customs shop.” 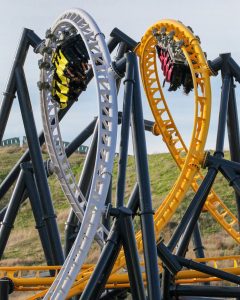 The new coaster is the central piece of a newly themed area known as The Underground, which is also home to the park’s wooden coaster, Apocalypse, along with the soon to be reopened go karts, Pacific Speedway.

See what our members are saying about this exciting new coaster in our Forum discussion.