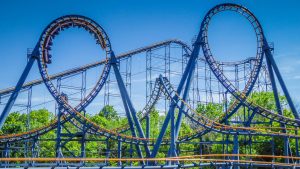 September 27, 2019 – Kings Island has announced that Vortex, the park’s classic Arrow multi-looping roller coaster, will be retired at the end of the 2019 season. The park claims that most rides of this type last between 25-30 years and since Vortex is currently in its 33rd operating season, the coaster has reached the end of its service life.

When it opened in 1987, Vortex was the first coaster in the world to invert riders six times through two vertical loops, two corkscrews and a boomerang turn. The ride was so popular when it opened that it helped Kings Island surpass 3 million in attendance for the first time that year. Since its opening, the coaster has given more than 45 million rides, with its record season that first year when 2.2 million rides were given.

Kings Island shared the fact sheet below along with their announcement of the ride’s retirement. Be sure to get your final rides before October 27th, the park’s closing day, and Kings Island is offering season pass holders the chance to ride the coaster a half hour before park opening each Saturday and Sunday until then. 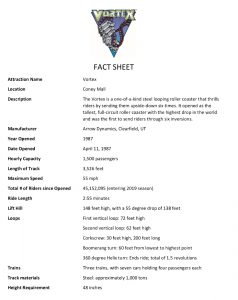 See what our members are saying about this sad news in our Forum Discussion.