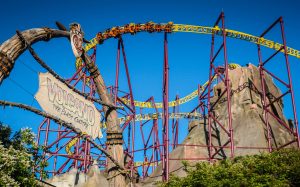 February 8, 2019 – After nearly a year of sitting dormant, Kings Dominion announced that Volcano – The Blast Coaster, the one and only Intamin Suspended Catapult Coaster ever built, will be removed after 20 years of operation. Known for its dual launches, especially the second one that propels the train out of the top of the structure, the coaster remained a guest favorite ever since it opened on August 3, 1998. That doesn’t necessarily mean it wasn’t a problematic ride, as it was know to suffer from capacity and downtime issues, which the park cited among the reasons for the closure.

“After thorough evaluation, the decision has been made to remove Volcano: The Blast Coaster,” the park wrote. “This wasn’t an easy decision for us, because we know that people love this one-of-a-kind coaster; however, over time it became nearly impossible to keep the ride up to our high standards of reliability and guest satisfaction, and for these reasons we had to make the tough call. We apologize to anyone who is inconvenienced by the removal, but hope they will understand that it was done to enhance the overall guest experience here at Kings Dominion.”

We hope you had the chance to ride as it was truly a fun and unique coaster the likes of we’ll never see again. We’re hard pressed to come up with another coaster that people were willing to continuously stand in such a long line to ride and it was always worth the wait.

See what our members are saying about the coaster’s removal in our Forum discussion.