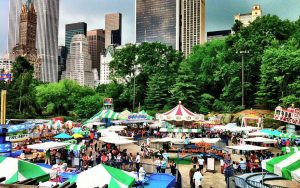 August 17, 2020 – Victorian Gardens, the amusement park that has popped up in Central Park’s Wollman Rink each summer for more than a decade, will not open for the 2020 season and may need to permanently close, its owners said in a statement.

In the news release, the Zamperla family, Italian theme park manufacturers who also own the company that runs Victorian Gardens and Coney Island’s Luna Park in the borough of Brooklyn, said the decision was based on the “limited guidance and uncertainty surrounding when amusement parks will be permitted to open in New York State.”

The park had been prepared to open with coronavirus safety protocols in place when the state entered Phase 4 of its reopening plan, in which outdoor recreation areas were originally included, operators said. Once Phase 4 arrived, however, amusement parks across the state were told they could not yet reopen. The state’s business lookup tool still lists Amusement and Theme Parks as closed.

“Regretfully, since Victorian Gardens’ normal operating season is coming to a close and New York State has not provided a re-opening plan for amusement parks, we are not able to open this season,” Zamperla said.

Zamperla said it appears unlikely that the park could reopen for the summer of 2021, and may need to “cease its operations entirely.”