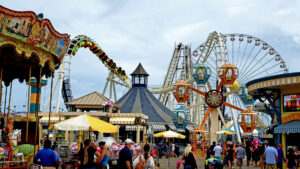 February 5, 2021 (last updated March 5) – The majority of theme and amusement parks across the United States have set 2021 reopening dates after the coronavirus pandemic forced many of them to postpone their 2020 season openings or remain closed for the entire year.

California has announced that theme parks may open at 25% capacity after nearly a near of closures, leaving Massachusetts as the only state that has not allowed theme parks to reopen in the United States.

SeaWorld San Diego has set a partial reopening date — but under zoo and aquarium guidelines with no rides. California’s Great America, which remained shuttered for all of 2020, is the first California amusement park to set a reopening date.

Six Flags Darien Lake and SeaBreeze in upstate New York have announced opening dates. Other New York amusement parks — including Luna Park, Rye Playland and Deno’s Wonder Wheel — have not yet set reopening dates. Legoland New York plans to open in 2021 after the new theme park had its 2020 debut delayed by the pandemic.

Several other theme parks across the nation have not yet announced reopening dates for 2021 — including Six Flags New England in Massachusetts, Idlewild and Conneaut Lake (Pennsylvania), Lake Winnepesaukah (Georgia) and Canobie Lake (New Hampshire).

The reopening dates below should be considered tentative at best — as with everything else involving the coronavirus pandemic.