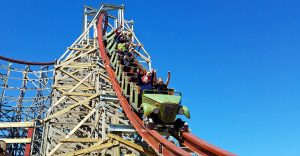 Hurler was a triple out and back wooden coaster built by International Coasters, Inc. and operated from 1994 through the 2015 season.

On hand for the ride opening were RMC owner Fred Grubb as well as legendary coaster designer Alan Schilke. The event was hosted by Rob Decker, Cedar Fair Senior Vice President of Planning Design, and covered by hundreds of reporters and photographers. The slider below contains photos of the opening event, the ride signage and the coaster train leaving the station as well as diving through the downdrop and racing around the overbanked curve.

Twisted Timbers is the first of four RMC coasters opening in 2018 and first to open at a Cedar Fair park. Another will be Steel Vengeance at Cedar Point in Ohio, the company’s largest I-Box track conversion of the former Mean Streak wooden coaster. The other three are RailBlazer at California’s Great America and Wonder Woman Golden Lasso Coaster at Six Flags Fiesta Texas, both new concept Raptor coasters, and Twisted Cyclone at Six Flags Over Georgia, another I-Box track conversion.

See what our members are saying in our Forum discussion.