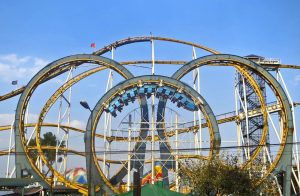 November 24, 2020 – Indiana Beach announced that it will debut two new attractions when it reopens for the 95th season in May 2021, including a Schwarzkopf triple looping coaster that’s being relocated from La Feria Chapultepec Magico in Mexico City. The other attraction will be a Gerstlauer Polyp/Octopus ride that operated at Kiddieland Park in Melrose Park, Illinois.

The park’s sixth coaster stands 111 feet (34m) tall, has a top speed of 53 mph (85 km/h) and features 3,444 feet (1050m) of track. It was originally purchased by showman Rudolf Barth in 1984 and operated as Dreier Looping for over a dozen years on the German fair circuit before being relocated to Malaysia from 1997 to 1999. It then moved on to Flamingo Land in the UK, where it operated as Magnum Force from 2000-2005, before the trip to Mexico.

First known as Montaña Infinitum from 2007–2014 and Montaña Triple Loop from 2014–2016, the coaster was renamed a third time to La Quimera, the name that will be remembered for all the wrong reasons. The coaster was the site of a fatal accident on Sept. 28, 2019, when it derailed and fell 30 feet (9m), striking one of the ride’s support structures en route to the ground. Two people were killed and two more seriously injured. The accident investigation determined that the park had failed to properly maintain its rides, including La Quimera, and was forced to close.

Indiana Beach officials are well aware of La Quimera’s history and will perform all the necessary updates and inspections before opening it to the public. The exact location within the park was not announced, as officials continue to work out those details.

Indiana Beach faced a permanent closure earlier this year until Chicago businessman Gene Staples purchased the park in April and reopened it in June.

See what our members are saying about the new additions and their guesses about the coaster’s location within the park in our Forum discussion.