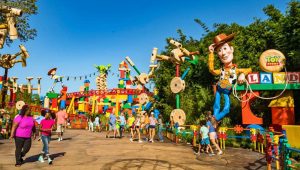 In addition to the new attractions, Toy Story Mania, Disney’s Hollywood Studios’ popular ride that opened in 2008, has been given a new entrance from Toy Story Land to incorporate it into the area.

Throughout Toy Story Land visitors walk between giant toys and other over-sized objects to create the rides and buildings, giving guests the feeling of being the size of a toy. This is the fourth Toy Story land to open following the first at Walt Disney Studios Park in Paris (2010), Hong Kong Disneyland (2011) and Shanghai Disneyland, which opened in April.