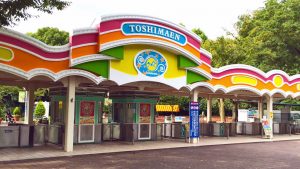 February 3, 2020 – The historic Toshimaen amusement park will close at the end of August and be turned into a another Harry Potter theme park to open in the first half of 2023. Seibu Railway Co. signed a deal to sell a big portion of the 22-hectare (220,000 m2) site to the Tokyo Metropolitan Government, which plans to build a municipal park there to continue to be used for the famous cherry blossom festival.

As first reported by NHK, the railway will lease the rest to Itochu Corp., and Warner Bros. Entertainment Inc. will run the Harry Potter theme park.

Toshimaen, which opened in 1926, is one of the largest amusement parks in Tokyo, with over 30 rides and attractions, including a wooden carousel that was made in Germany in 1907 and brought to the park in 1971. It’s also famous for its various swimming pools, including a 1150 foot (350m), doughnut-shaped pool that is said to be the world’s first flowing pool. If any of the attractions will remain is unknown, but we wouldn’t be surprised to see the Togo Cyclone and Vekoma Corkscrew coasters removed, with the Mack Rides Blauer Enzian mine train and the kiddie coaster re-themed to Harry Potter properties.

Tohimaen is scheduled to close for good on August 31, except for its hot spring facility. As for the 94-year-old park’s reopening from the Coronavirus shutdown, Seibu said it will reopen on Monday, June 15, except for the popular swimming area.

See what our members are saying about the park’s closure and the new  Harry Potter attraction in our Forum discussion.