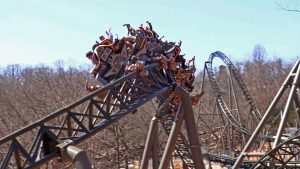 March 14, 2018 – Time Traveler, the world’s first launched looping spinning coaster, opened at Silver Dollar City. The record-breaking custom coaster was designed and built by Mack Rides and features a 100 foot (30.5m) 90° drop out of the station, three inversions, two launches and a top speed of 50.3 mph (81 km/h). As the world’s fastest, steepest and tallest complete-circuit spinning coaster, it marks a new era in the amusement park industry, delivering ride experiences unlike any before, with no two rides alike, and is Silver Dollar City’s biggest attraction ever with an investment of $26 million.

On hand for the ride opening were park owners Jack and Sherry Herschend as well as Mack Rides CEO Christian von Elverfeldt, who rode in the front car of the first train to leave the station. The event was hosted by park president Brad Thomas and covered by hundreds of reporters and photographers. The slider below contains photos of the opening event, the ride sign, the station queue line and the coaster train in the station as well as on the track.

See what our members are saying in our Forum discussion.