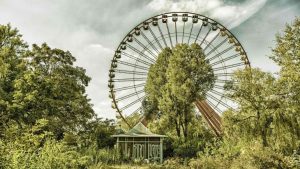 August 15, 2020 – Officials for Grun Berlin GmbH, a German company that offers urban activities, say they are working to revive the abandoned Spreepark amusement park as a meeting, cultural and recreation space. Spreepark opened in the city in 1969 and closed in 2001. Grun Berlin GmbH officials say they plan to reopen the first phase in 2022 with art studios and revitalized favorite attractions.

Many people wonder why a metropolis like Berlin doesn’t have an amusement park, but once upon a time it did. Back when the city was divided, like the rest of the country, the Plänterwald cultural park was inaugurated in 1969 for the 20th anniversary of the German Democratic Republic. For the culture park in non-communist foreign countries, rides and carousels were bought for a staggering 20 million marks. After the fall of the Berlin Wall, it was closed like so many East German companies.

However it wasn’t long before the married couple Pia and Norbert Witte, showmen from West Germany, brought the Spreepark, as the amusement park was now called, back to life. It was torn down and rebuilt as the upswing in the East began to take shape. But the amusement ride business did not generate enough revenue and in November 2001, the Wittes left Berlin for Peru from one day to the next – and not only took their five children and the cockatoo with them, but also six of the rides. 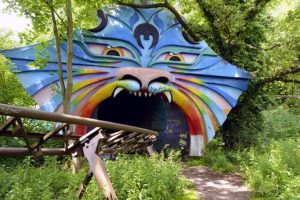 What remained and was somehow carried away or stolen over the following years by burglars and hoodlums who vandalized the park. Urban explorers also gained access to the site and were inspired by the increasingly morbid charm of the decaying rides, until the city finally bought the park back and secured it from intruders.

As Grün Berlin writes on its website, a framework plan for the new Spreepark was designed from 2016 to 2018 “in dialogue with the population”. “In the course of the concrete project planning and implementation, the Spreepark will gradually be made accessible to the public again,” it says. Construction work is scheduled to begin this year, and the first parts of the new park could open in 2022.

The renovation of the so-called egg house, which is to house an excursion restaurant with a large beer garden right on the water, has already begun. In addition, apartments for artists and exhibition rooms are to be created there. 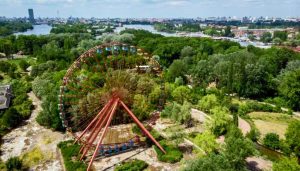 The old Ferris wheel should turn with a new shine, as a real ride, and is being extensively restored for this purpose. The old park railway and the 360-degree cinema are also to be put back into operation.

If you want to see Spreepark in its current state, you can do so through special tours on various dates until November.