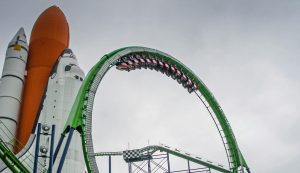 December 16, 2016 – After operating just over a quarter century, Space World theme park announced in a newspaper interview that it would close in December 2017. The park, known for its iconic Venus GP roller coaster that features a full scale model of NASA’s Space Shuttle, opened on April 22, 1990 on the Nippon Steel grounds.

At its peak in 1997, the park recorded 2.16 million visitors, but that number decreased dramatically since and the Nippon sold the park to Kamiomori tourism in 2005. In 2008 Kamori tourism laid off half of the park employees and lowered ticket and season pass prices in a effort to increase attendance while lowering operation costs.

At a cost of 2 billion Yen, the park recently added a swimming pool and ice skating rink, however last month the park suffered intense public criticism after placing some 5000 fish in the ice of the rink. The aquarium-themed attraction was deemed as animal cruelty, although the fish were already dead when they were frozen, and the fish were removed.

Read more about the park closing in our Forum discussion.

Read more about the ice rink fiasco in our Forum discussion.