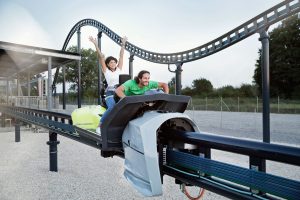 February 16, 2020 – Skyline Park is getting rid of Sky Dragster, the park’s Maurer Rides Spike coaster that opened in June, 2017. The park decided to call it quits and remove the prototype motorbike ride after three years of operational difficulties. Spike coasters feature “interactive acceleration” allowing riders to chose where and when to accelerate by twisting a handlebar throttle. Considering that the coaster is engineered from the company’s automated material transportation vehicle design, it’s no surprise the coaster had more down time than up.

The only other Spike coaster operating is Desmo Race at Mirabilandia in Italy, which also suffers from similar issues after a long delayed opening last July. Unlike the Dragster, the Race model is a dueling coaster with two sets of tracks.

Carnival Cruise Lines has also announced it will feature the world’s first coaster at sea by installing a Spike coaster on their soon-to-debut Mardi Gras cruise ship.

See what are members are saying about the ride’s removal in our Forum discussion.