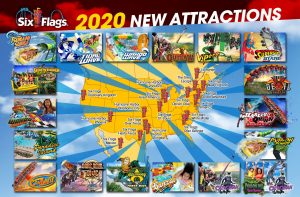 August 29, 2019 – Six Flags announced all the new attractions coming to their parks in 2020, including the roller coasters Jersey Devil Coaster for Six Flags Great Adventure, Aquaman Power Wave for Six Flags Over Texas and Sidewinder Safari at Six Flags Discovery Kingdom along with a ton of flat rides and lots of new slides for their water parks.

Jersey Devil Coaster, RMC‘s (Rocky Mountain Construction) single-rail Raptor coaster, will be the tallest, fastest and longest ride of its kind. Towering 130 feet (40m) tall with a 87° drop and reaching speeds up to 58 mph (93.5 km/h), riders will soar single file through the woods over 3,000 feet (914.5m) of track.

Aquaman Power Wave, a Mack Rides water coaster, will be the first-of-its-kind in North America. It will launch riders backwards and forwards, straight up colossal 148 feet (45m) twin track towers and then send them plunging straight down across more than 700 feet (213.5m) of track at speeds up to 63 mph (101 km/h), ending with the ultimate massive splash down.

Sidewinder Safari, the park’s 11th coaster, will be a one-of-a-kind attraction combining a Zamperla spinning coaster and animal exhibit experience. And joining the parks getting new coasters will be La Ronde in Montreal, Canada, getting Vipere, an Intamin Zac Spin coaster that’s being relocated from Six Flags Magic Mountain.

See what our members are saying about all these exciting additions in our Forum discussion.