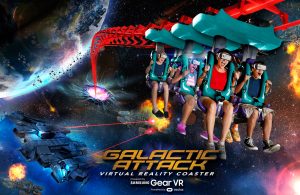 Through the first portion of the ride the headset’s passthrough functionality makes riders aware of their surroundings, by allowing them to see the “real world,” including the person seated next to them as well as a heads up display overlay that will show data like current status of weaponry, time codes, fuel cells, and a countdown clock. Cresting the lift hill, a massive, swirling wormhole comes into view before riders are swept into a full on VR space battle that offers three different endings.

This spring the park’s Vekoma SLC will also feature trains that are being outfitted with new restraints to make “a more comfortable, smoother and exhilarating ride experience than ever before”.

Watch the ride announcement and a video of what the VR portion of the ride experience below: