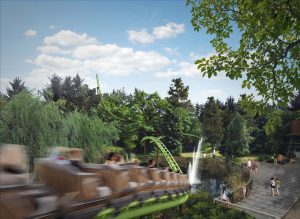 April 14, 2019 – Fårup Sommerland announced they will be adding a Vekoma family boomerang coaster for 2020. Saven, which is Danish for Saw, will be the park’s seventh coaster and the first since Orkanen, a Vekoma suspended family coaster, opened in 2013. It’s the same type of coaster as Raik at Phantasialand in Germany and Accelerator at Drayton Manor in the UK (the first of this kind), but with a unique layout.

The ride starts with the coaster train being pulled backwards out of the station up a 79 foot (24m) tall spike, in order to subsequently drop forward through the station along approximately 781 feet (238m) of track with many fast-paced turns and twists. Reaching a top speed of 37 mph (60 km/h), Saven splashes over a pool of water before diving into a tunnel and being pulled up another spike at the end of the route, before transversing the entire distance backwards.

Surprisingly, previous height restrictions due to the nearby beach means Saven will be the park’s tallest coaster. 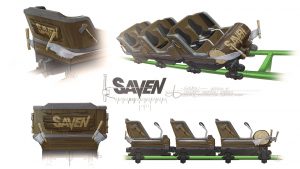 Fårup Sommerland is opening two new attractions this year: a SideCar flat-ride from Technical Park and a Zamperla Wave Swinger that replaces their old one.

See what our members are saying and follow the construction of this new coaster in our Forum discussion.